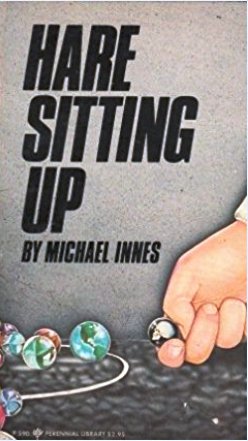 "You yourself, don't you find it a beautiful clean thought, a world empty of people, just uninterrupted grass, and a hare sitting up?" (Women in Love by D.H. Lawrence)

I didn't actually promise I wouldn't write another review of an Innes book ever again, so here we are. As most of you know I am a MAJOR Michael Innes fan so I can't reasonably be expected to stay mum about one of my favorite authors for long. I've written enthusiastically about his books over the past eight years of my blogging existence, so if you're interested, just use the search thing at the bottom of the page. It's finally working again.

HARE SITTING UP reads like a story in which Innes (pseudonym for John Innes MacIntosh Stewart - 1906 - 1994) was having fun seeing how far he could go with a 'thriller mystery' without actually killing anyone off. In fact, near the end when a killing does occur, it's not a very prepossessing one or for that matter, of much real importance. What is most fun about this book - at least for me - is the journey. That is often the case with several of Michael Innes' books - my favorites, in fact.

Here Innes indulges the very intriguing and popular trope of identical twins who are adept at taking each other's places and have done so since childhood. This is revealed to us early enough so it's not meant as a real surprise. We do, however, get misdirection and a long discussion between passengers on a train, only small parts of which have any relevance to anything which happens later. Most of it is glib conversation about how the world might end and might not dreary society as a whole be ready for that end (don't forget that this was 1959 - the Cold War was in full swing and scientists were discovering all sorts of various and sundry ways to end it all.)

"I'm much more interested," Gavin said at once, 'in something else. It's the twilight of the gods idea - the fascination of bringing everything else down with you as you fall. Hitler was gripped by that, I imagine. But you needn't necessarily be a Wagnerite to feel the tug of it."

Alice crossed a green leg over a yellow one. "Death-wish stuff," she said. "How does it correlate with actually dying? Does anybody know? You see, we've talking about the dangers of concentrating power - and far more potential destructive power than has ever existed before - in the hands of old, sick men..."

And on it goes, in Innes, we have discussions of this sort which might mean something as we go along but then again, might not. In HARE SITTING UP, the discussion is just to put us in a frame of mind for the pile of absurdities which come next. The train passengers themselves - except for two - will not show up again in the story.

As for the twin thing, well here we have two brothers: Miles Juniper and Howard Juniper - one is a scientist, a germ warfare expert (uh-oh) and the other is a public ('public' in the English sense) school headmaster. And remembering how much Michael Innes loves the preposterous, he has one of the men disappear - but which one? He also has Chief Superintendent Appleby show up at the school in disguise to interview the brother - just in case spies should be lurking - that sort of thing.

Some people (with little or no imagination) do not like Michael Innes' sense of absurdity and his oft indulged propensity for outrageous plots and odd humors. But I'm not one of those people. In many ways, I sometimes think that Innes was one of the early proponents of 'magical realism' except we didn't call it that back in the day. His use of coincidence and Appleby's nearly clairvoyant knack for putting two and two together with various leaps of intuitive logic, are legendary.

The plot of HARE SITTING UP is a tangled one as Appleby goes off on wild goose chases and even recruits his wife (improbably he's done this a couple of times before) to check out a school once he realizes that something might be amiss there. She jumps right into the thing by improvising a wild game (Judith Appleby comes from a long line of eccentrics, see APPLEBY'S END for the definite proof) in which she and several students run all over the campus looking for clues of something or other.

In the meantime, Appleby confronts a wacky member of the aristocracy, a reclusive ornithologist living at a remote estate with a whole profusion of birds and ducks who amble in and out of the house at will. Also in residence, a granddaughter to keep an eye on him.

Eventually, Appleby begins to get the hang of the thing and shows up at a secret, rainswept government installation on a remote Scottish island. The atmospherics here are particularly effective.

From there, it's back to the birds and the loony lord who may or may not be plotting a crazed something.

It's all improbable and not meant (despite the subject matter) to be taken too seriously. As I mentioned, it's the journey that I enjoy most with Innes and the often obtuse use of language and literary allusions - the knack for which is unlike any other genre writer. Yes, he was often pulling our leg or even, perhaps, making sneery faces, but I always got the idea that he was doing it in a very indulgent way - like an uncle who knows he's smarter and wittier and more literary than anyone else, but manages somehow not to make you resent him.

Yeah, I guess you can call me a Michael Innes fan-girl.

Since this is Friday, don't forget to check in at Edgar Award nominated author Patricia Abbott's blog, Pattinase, to see what other forgotten or overlooked books other writers are talking about today.