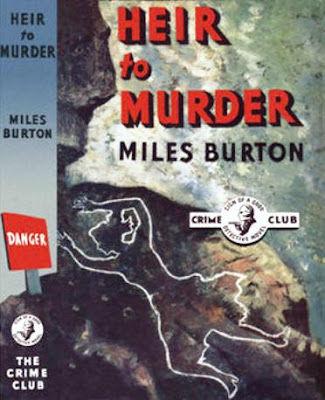 This is the third time I've run into Miles Burton's creation, Desmond Merrion, wealthy criminologist and former intelligence officer. And it is also the third time I've come away unimpressed. Lucky for me, then, that Burton's books (at least the three I've read so far) work pretty well despite the banality and uninspired crime-solving of Merrion and Inspector Arnold of Scotland Yard, Burton's detecting duo. Obviously, there is more to these books than who solves the crimes or I would not have sat down to read a third one.

The crimes in HEIR TO MURDER begin on a rainy windswept night overlooking the rush of a storm swept sea - so of course we are hooked right off the bat. The author is then smart not to let the time lag between a second murder and more chicanery. Crimes that seem at first to be accidents - unrelated coincidences - turn out to be links in a nefarious chain. (As we knew they would.)

There are NO coincidences - especially in murder mysteries, so off we go.

Miles Burton's obvious forte was plotting, at least so it seems to me. His characterizations suffer by comparison and though I am usually a 'character' person, occasionally I will be drawn in to a story where plot and setting are intriguing (or familiar) enough to satisfy my craving for a good stormy night English village mystery. The setting is Carmouth on the Southwest coast of England. (I'm big on windswept English villages - well, you probably already knew that.)

Not that Burton's characterizations are awful, that would be too much to bear, but just that they are not memorable in any way. Even the killer, once exposed (and those of us who are long time mystery buffs will probably figure out who the murderer is before Merrion does) is not anyone who is sharply drawn and his motivation isn't clear until we are given information near the end which should have been (in a fair play mystery which I believe this is supposed to be) revealed earlier. But again, that didn't stop me continuing to read and so I give the author credit for that particular deft trick.

HEIR TO MURDER begins right off the bat with the death of a local doctor in a cruelly staged accident. Then later a nurse is done in cliff-side by 'accidental' fall.

Desmond Merrion and his wife are vacationing nearby and get drawn into the mystery early. Scotland Yard finally shows up on the scene after a third violent incident with more to come. At first I had the suspicion that we were dealing with a serial killer - English village style, but after awhile that seemed not to be the case.

Lady Violet Ventham, a wealthy elderly woman turns out to be the fulcrum around which events are progressing though she herself remains untouched, keeping her own secrets while inviting Merrion and his wife to stay with her and her resentful niece at the local manor house. Of course Lady Ventham is rich enough that her will is an item of more than casual interest. Could it be the reason for all the violent happenings?

What do you think?

But the resolution of the mystery takes more than the usual twists and turns and even if the ending is a tiny bit of a let-down, the author still brings it off.  It is in the oft misleading way in which the story unfolds that keeps the reader guessing and wondering what will happen next. In a mystery, 'what  happens next' can make up for any short-comings if there are certain other elements present.

Foremost of these elements is style of writing which often makes up for other sins. Miles Burton is a good writer and sometimes that's just enough when coupled with plotting dexterity. He is adept and clever enough to interest the reader and keep him or her riveted despite his lackluster characters. How that works I don't know, I just know that occasionally it happens. There's no accounting for the mysterious.

I recommend HEIR TO MURDER even if you haven't read any of Burton's books before. It is the 46th (!?) entry in the series but this type of thing doesn't need to be read in order.

Miles Burton was the pseudonym for Cecil Street, a decorated soldier and later prolific writer of mysteries.

It is Friday once again, so don't forget to check in at Edgar Award nominated author Patricia Abbott's blog, Pattinase, to see what other forgotten or overlooked books other bloggers are talking about today.