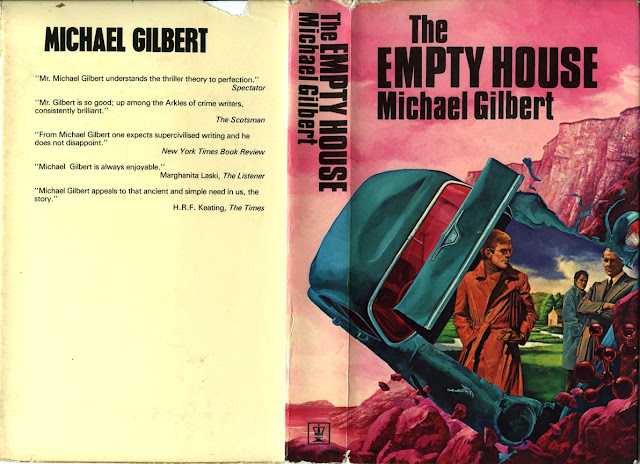 Another Michael Gilbert book to talk about. Admittedly I was very disappointed in the rather boring and unpleasant PAINT, GOLD & BLOOD by Gilbert, which I read after the oh-so-brilliant SMALLBONE DECEASED, but THE EMPTY HOUSE makes up for the lapse.

(I'm currently reading a third Gilbert book which we'll talk about at some point - if I like it. So far so good.)

The thing is, from what I understand, Gilbert had no inclination to follow a set routine. Where SMALLBONE DECEASED was a wonderful whodunit set in a London law office, the other two books I've read have been more thrillers than anything else. So take that into consideration. Occasionally this kind of thing can be disconcerting. But I'm willing to adapt if the writing is good enough and the stories engage me in some way.

And now for THE EMPTY HOUSE:

Tall ("I'm 6' 5") and string thin Peter Manciple is an insurance adjuster with a quirky talent.  He is blessed with a kind of selective photo memory thing which helps him in his work and makes him a valued investigator even at his youngish age. His cautious firm is quite willing to send him off on an important case even if he is considered a bit of an occasional loose cannon.

When a car carrying a local man plunges over a cliff at Rackthorn Bay,  no one expects the car or the body to be found since the waters there are treacherous. This particularly jagged coast of Devon is known as a spot where ships, in the past, had often been lured by smugglers to their doom.

The occupant of the car is presumed to be Dr. Alexander Wolfe, a geneticist who was working on a hush-hush project involving potential biological warfare at a nearby government installation. Turns out his insurance policy has an odd provisio involving death by water which is one of the reasons adjuster Peter Manciple is on the job.

Was it accident or suicide or something else? As Manciple begins his investigation it almost immediately becomes apparent that 'something else' might be involved. Dr. Wolfe was being stalked by both Israelis and Palestianian agents so his 'death' came at a very opportune time. When Manciple visits the sinister government labs where Wolfe worked, he is aware that all is not as it should be. One of the scientists seems especially jittery and later calls Peter to arrange a secret meeting. Uh oh.

In the course of the investigation, Peter also visits a local archaeological dig where he spots some incongruities which cause him to wonder if the workers there might not be involved in nefarious activities having to do with Dr. Wolfe's death. Peter's trick memory plays a valuable part in deciphering visual clues as he begins to put two and two together. To that end he will hook up with a beautiful young woman traveling about the countryside with her brother.

When he is advised to leave well enough alone and sign off on the investigation, Peter is more determined than ever to do his job even in the face of obvious threats to his life. As a result he will be drawn into a treacherous conspiracy of cold blooded army types, Israeli assassins and equally murderous Palestinians all vying for the notes Dr. Wolfe is presumed to have left behind.

Though I was not especially happy with one aspect of the ending, I still highly recommend THE EMPTY HOUSE even though I have no idea why the book is titled thus since no empty house has anything to do with anything in the book. Not really. But you'll like the engaging leading character (and isn't that always half the battle right there?) and his quest for the truth simply because it is his job.

And since this is Friday once again, don't forget to check in at Todd Mason's blog, Sweet Freedom - he is doing hosting duties this week - to see what other forgotten or overlooked book other bloggers are talking about this week.