Friday Forgotten (or Overlooked) Book: THE MAN WHO WAS NOT by John Russell Fearn 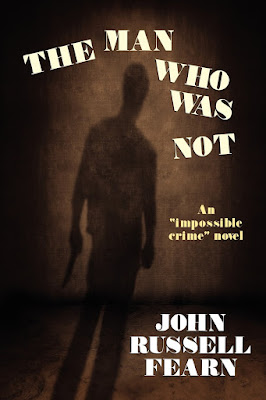 I owe thanks to TomCat over at Beneath the Stains of Time for recommending John Russell Fearn, a writer I'd never heard of much less read. But I was intrigued enough by TomCat's review of a different Fearn so that my next stop was Abe Books online - my home away from home when it comes to vintage. Actually, several Fearns are now available as e-books too. But I will try for an actual book if I can find it first and lo and behold, I found one I could afford and it arrived a couple of days ago.

And before I hardly knew what was what, I'd sat down and read the whole thing. Don't you love when that happens?

Ultra prolific English author John Russell Fearn  published under MANY pseudonyms, more than we have time for here. (I can only imagine that he wrote 24/7 with only brief time-outs for food and drink.)  I can't find an original publication date for THE MAN WHO WAS NOT, so I'm assuming late forties or mid-fifties since Fearn passed away in 1960.

At any rate, I enjoyed this book so much so that I read it at one fell swoop when I had originally meant to read just a few pages to note the style and then move on to another book I was in the process of finishing.

THE MAN WHO WAS NOT is, I suppose, an impossible crime mystery but in truth, that sort of thing doesn't matter much to me one way or another. I'm not so much interested in 'category' as I am in reading a good, fast-paced, well-done whodunit with enough mystery to keep me guessing. This book has that and more - the murders themselves (and there are more than one) are carried out in preposterous fashion - the sort of thing that would never work in 'real' life - but here they work because 'why not?' - these were the sorts of crimes inventive writers were creating back in the day and when I read a book like this, I suspend my disbelief willingly.

This is nothing more (or less) than a break-neck whodunit in which motive doesn't matter as much as the shear improbable idea of a murderer going through all these machinations simply to do in a whole family. Need I say, I didn't mind the outrageousness of it at all. For me, that's part of the 'fun'.

One by one, members of the Dawson family are being eliminated.

But when one of the Dawson daughters receives a threatening phone call warning her she will die at a certain time, she goes to Scotland Yard. They assign some men to guard her (I didn't know the police actually did this, but apparently they do if the father in the family is a renowned somebody - in this case, a surgeon.) But despite the guards, Trudy Dawson, newly affianced and seemingly without an enemy in the world, dies. Scotland Yard takes a second look at her brother's death out on the highway and discovers that he too had received a warning phone call.

By the time the third warning message is delivered to another member of the Dawson family, Scotland Yard is more baffled than ever. The phone booth from which the phone calls were delivered had been under surveillance and NO ONE was seen to enter the booth and instigate the call.

Soon Sawley Garson, 'specialist in scientific puzzles' is called in to help the Yard.

There is little character development here since this is certainly not a character driven book unless we count the strange character of the killer who constructs this whole farrago of murderous complications to suit himself.

A lot of what happens in this book is mumbo jumbo science - or at least, so it seems to me. But because of the author's crafty ways, the thing just works. I just sat there and read away, enthralled by the whole thing, wanting to know 'what next' and even when we begin to suspect who the killer is, it still kept my interest until the very last page.

A terrific book, I'd say, for an afternoon or evening of reading in a comfy chair or poolside or at the beach. No brain stretch but still intriguing enough to capture the imagination. Sometimes you find yourself caught up in a book for no other reason than the story carries you along helter skelter and before you know it, reality has slipped away. I'm so happy I discovered John Russell Fearn (with TomCat's help) and I'm looking forward to getting my hands on more of his mysteries.

Since this is Friday once again, don't forget to check in at author and Edgar Award nominee Patricia Abbott's blog, Pattinase, to see what other forgotten or overlooked books other bloggers are talking about today.