Friday Forgotten (or Overlooked) Book: ONE WAS A SOLDIER by Julia Spencer-Fleming / Small Town Cops and Sheriffs Day 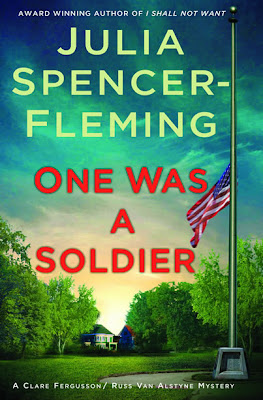 (I re-worked this review from 2011 because no matter how hard I tried I couldn't think of a book featuring a small town cop that I might have read in the past (though I know there are several) and I couldn't find on my shelves a book that takes place in a small town and features a local cop, except for the mysteries of Julia Spencer Fleming. I'm sure there are  several others here somewhere but they are obviously in hiding. OR they disappeared when I moved.)

It is difficult to review a book that is part of an on-going series featuring characters I've grown to know and have a great deal of affection for. The difficulty is this: How much do I tell about these characters and their present situation which has been slowly built up (by the author) over the previous six books?

ONE WAS A SOLDIER is the seventh entry in a series which, in its debut book won just about every literary prize available. It is in many respects, a brilliant series because it manages what many of these sorts of books do not: it sustains the on-going tension, suspense and interest on a high level from book to book. The series is set in a small upstate New York town in the Adirondacks, the fictional Miller's Kill, where it always seems to be cold, snowy, windy and damp. Needless to say, the weather adds enormously to the atmosphere of the stories. The two main protagonists of ONE WAS A SOLDIER are the pragmatic Desert Storm vet and Chief of Police, Russ Van Alstyne and the Episcopalian priest Clare Fergusson. She is an enigmatic, no-nonsense helicopter pilot, vet of the Iraqi war and a current Major in the National Guard.

As far as the citizens and church-goers of  Miller's Kill are concerned, Clare was a curiosity from the first. And in many ways it isn't until recently that she appears to have found firmer footing within the town; many of whose inhabitants are themselves veterans or families of veterans.

As the series begins (IN THE BLEAK MIDWINTER 2002), Chief Van Alstyne is happily married to Linda, a woman about whom we learn a bit more as the books progress though early on she remains offstage. She is self-employed making drapery and curtains to order for local businesses.

But there is an immediate attraction between Clare and Russ, as she, the newly appointed priest of St. Albans, arrives in town in the middle of winter in her her totally impractical red sports car. She is as different from Russ's petitely beautiful little wife as night to day. Clare is tall, physically imposing and a woman used to doing for herself after years as an Armed Forces helicopter pilot. The reader and the characters know that this unwelcome attraction can never be acted upon. There is nowhere the attraction can go and so in this first book, Clare herself distances herself from the Chief of Police.

Russ and Clare are realistically drawn honorable people and their attraction must necessarily remain in the background, lurking about but not allowed to take over. It is in the tension generated by this attraction that the books' foundation lies. I wait to know what's going to happen, year to year, book to book, as the attraction deepens and the story of these two troubled souls progresses.

So I don't want to reveal too much about what has led to the present status of events, though if you read this book first, you'll figure it out immediately and then, I assume, want to go back and begin at the beginning. That's happened to me before with a series - it's not the end of the world. It's occasionally helps in certain series to know what's happened before to the two main characters. I don't mind this when the characters are written strong and capture my undivided attention.

ONE WAS A SOLDIER is centered primarily on the rough times that veterans - Clare included - often have upon their return to civilian life. When Clare comes home from her recent tour of duty flying combat helicopters - she's been gone a year and a half as the book begins - she is beset with post traumatic stress and turns to her leftover stash of pills brought back from Iraq, downed usually with alcohol. Clare, despite her calling, is not immune to the pressures brought about by disturbing memories of war.

Feeling herself losing control, Clare joins four other veterans in a support group. We get to meet those survivors, each with their own individual and very moving problems. When one of the group dies, Chief of Police Russ Van Alstyne is convinced it's a suicide. But Clare and the other vets are not so sure and decide to conduct their own investigation. What they eventually discover may link events in Baghdad with the town's wealthy real estate impresario and chief employer, a vile man who is also Clare and Russ's nemesis from a previous book.

I won't say too much more about the actual story only because, as I said, I don't want to spoil it for those of you who haven't read it yet and are not familiar with what's been happening to Clare and Russ in Miller's Kill, New York.

Author Julia Spencer-Fleming reveals the story from several viewpoints and moves a secondary romantic entanglement to the front burner, woven in with the stories of the returned vets. My only problem with this technique is that I've never been fond of varying viewpoints. But I like these books so much, I will tolerate it from this author. I'm also not liking the woman cop involved in the secondary romance - she just isn't a very likable person - the author needs to take care of this in the next book, I think. Unless she's going someplace else with this story line.

In general, Spencer-Fleming gets to the nitty-gritty of what makes these complex characters tick. These people 'live' in the imagination from one book to the next. You leave them each time, mystery solved, but feeling: okay, what's going to happen next? My opinion is that this is one of the best series out there and you're really missing something special if you're not reading it.

But - as I said earlier, BEGIN AT THE BEGINNING. Though if you don't, the world won't come to an end. Look, just read these books any which way you like, they are damn good.

Julia's Fantastic Fiction page listing all the books in the series.

Since it's Friday, don't forget to check in at Edgar Award nominated author Patricia Abbott at her blog, Pattinase, to see what other forgotten or overlooked books other bloggers are talking about today.