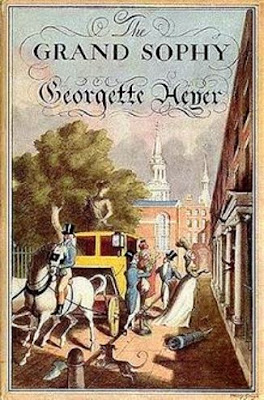 Isn't it wonderful when you discover you've been wrong all along about an author and then - oh heavenly day - you have a whole roster of books to cruise through. (I snobbishly had thought that Georgette Heyer's work was not for me because who knows why. I was ignorant, that's all I can say.)

Georgette Heyer's Regency books (as well as her mysteries) are for EVERYONE who enjoys a certain style of historical British wit, elegant stories, charmingly written, well researched, filled with great characters, occasional bits of brilliance and laugh out loud moments. I discovered her a couple of years ago and since then I've read and listened to (on audible) many of her books and my enthusiasm and respect for her work have never lessened.

Heyer didn't invent this sort of story-telling except maybe she did.

THE GRAND SOPHY is first and foremost, a 'domestic comedy'. The kind of story you either like or you don't. All I require of this sort of thing is that it be well and wittily written and that it makes me smile, maybe even laugh out loud. Fortunately, Heyer delivers the goods.

Sophy Stanton-Lacy is an unfashionably outspoken and bossy young woman with flash, cash and dash. She is a domestic hurricane of quick wit, intelligence and common sense. In action, she reminds me a bit of Flora Post, Stella Gibbons' heroine in COLD COMFORT FARM - though Flora is less outspoken and has no money. Sophy on the other hand, is loaded.

But like Flora, Sophy is a natural born manager. She can't help wanting to set things to rights. It's in her nature. She can't be happy until she organizes everything and everyone to her (and their) true satisfaction. She sounds insufferable, I know, but really she isn't. She's actually a hoot. She is also a pretty emancipated miss, a Regency feminist if there ever were such a thing.

Sophy makes you smile and shake your head - she is outrageous (even going so far as to carry a pistol when necessary (needless to say, she is a keen shot), but always with the best of intentions. Proven usually right in the end, she simply isn't the type to stand by and watch everything about her go to rack and ruin - not when she's sure she can figure out the right solution. In her plots and ploys, she works with the reader to fashion the ending the reader wants. Very clever.

Simply let yourself be guided by the Grand Sophy and all will be well.

When this dynamic whirlwind is sent - temporarily- to live with her uncle Lord Ombersley's family, while her father Sir Horace goes on a government mission across the sea to Brazil, Sophy immediately sees that her uncle's fretful family needs fixing.

Unconventional and outspoken, Sophy doesn't stand on ceremony. She was raised on the Continent traveling with her widowed father during the unpleasantness with Napoleon and she's seen and done things most young Regency girls can only read about - if they they are allowed to read newspapers and novels that is (which many aren't.). Sophy knows everyone who's anyone, including the Duke of Wellington himself. Sophy is, of course, a 'lady' but one who is impatient with ridiculous Regency rules and regulations.

Lord Ombersley's eldest son Charles Rivenhall (Sophy's cousin) is, for all intents and purposes, the head of the family now, having inherited an estate from a relative who rightly skipped over Charles' father because of the elderly parent's well known profligate ways. Charles is a bit of a martinet, what with having the weight of his father's gambling debts, his mother's clinging indecision, careless teenage brother Hubert and four sisters to be properly married off each in their turn, on his shoulders. The entire family treads lightly around his infamous temper. Sophy wonders almost immediately how the family has allowed Charles to become so tyrannical and set in his ways.

Stiff-necked Charles is recently affianced to Miss Eugenia Wraxton, daughter of a Viscount and a stickler for Regency propriety. She is also an unprincipled snoop and an all around pain in the butt. But Charles, of course, will not realize this until Sophy opens his eyes to Miss Wraxton's unlovely persona. Charles is hoping for a 'comfortable' marriage, but Sophy soon begins to make him realize that the grim Miss Wraxton would be anything but.

As for the rest of the family: Charles' sister Cecelia, a sweet but stubborn young chit, has fixed her attentions on a beautifully handsome young poet, Augustus Fawnhope, a penniless 'younger' son who refuses to get a real job. He is writing his 'magnum opus' - an epic poem he hopes someone will buy and stage. Augustus isn't a bad sort at all, he's just oblivious to reality. The equally beautiful Cecelia had been intended for the slightly older but elegant, charming and kindly, Lord Charlbury, a wealthy man who adores her. But Cecelia refuses to comply. And then of course, Charlbury would go and get an attack of the mumps at a most inauspicious time.

The likable but ineffectual Lady Ombersley cannot be relied upon to deal with any family exigencies involving domestic life as she is the type who cannot abide fuss - it sends her into spasms. She lives in dread of discomfiting her eldest son Charles who holds the purse strings.

When one of the younger daughters becomes deathly ill, it is Sophy who dismisses the alcohol sloshing 'nurse' and takes over round-the-clock nursing duties herself - Lady Ombersley's spasms having prevented her from seeing to her little daughter's needs. Charles' eyes are opened by Sophy's forthright goodness as he realizes that Miss Wraxton's fear of disease has prevented her from even entering the Ombersley's household until all contagion has been eliminated.

As trials and tribulations come and go, there are some colorful characters to meet, including a wonderfully indolent Spanish Marquesa and an ineffectual hypochondriac popinjay, Lord Bromford. who fancies himself in love with Sophy. But as family dramas pop up, Sophy steps in and takes charge, annoying and bedeviling Charles every step of the way.

Why she even goes so far as to visit an odious money-lender on the seamier side of town, carrying a pistol hidden in her fur muff! Yegads, does this young woman have no propriety?

Fortunately for the Ombersleys, she has. And fortuitously she has landed in the middle of this fractured family, intelligently intuited what is wrong and used her special talents to set things to rights. In the end, all will be well and the grand Sophy will emerge triumphant.

This is such a delightfully entertaining book that if I were you I'd save it, like a special box of expensive chocolates - until the right moment. You can then sink into a pile of pillows (the chocolates are up to you), retreat from the strife and drama of daily reality and enter the agreeable make-believe Regency world of THE GRAND SOPHY.

This Friday, Todd Mason will be doing meme hosting duties at his blog, Sweet Freedom, so don't forget to check in to see what other forgotten or overlooked books other bloggers are talking about today.