The MOVIE OF THE WEEK BLOGATHON 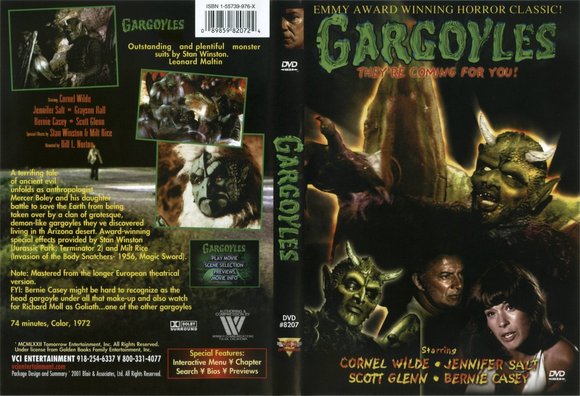 Rick's Classic Film and TV Cafe is a very enticing movie and television oriented blog where those of us in the know go for pertinent and impertinent (as the case may be) vintage film and TV information of the most intriguing kind. Rick's enthusiasm is genuine and catching and there's little he doesn't know about early television and films. So when he announced a Blogathon of classic mid 1960's - 1989 TV Movies of the Week – I wanted to be a part of it. I begged, I pleaded, he said okay and here we are.

(It occurred to me after I'd chosen this movie to write about that I'd written about it a few years ago. But that was then and this is now and anyway, there are only finite movies to write about.)

GARGOYLES (1972) is my Blogathon entry and boy did I pick a humdinger to exemplify the classic 'movie of the week' style back then. It's entirely possible that I chose this because it's the only movie I remember from way back then, but that's another story for another day.

This is actor Cornell Wilde near the end of his long film career, he is playing the father here, sleep-walking though the part of Dr. Mercer Boley, a combination paleontologist/anthropologist who specializes in debunking old monster myths, fetishes and practices and writing best-selling books about it all. On the relevant summer in question, the professor is joined by his daughter Diana (Jennifer Salt), as together they haphazardly tour the desolate southwestern desert while he completes his latest research for an upcoming - as he describes it - '...nice,coffee table book.'

Salt is a baby-voiced, would-be journalist in a fetching 1970 'hippie' ensemble - flowing pants, beads and skimpy halter. No wonder she captivates a certain horned and lurking apparition of which more shall be revealed shortly.

Heading out from the airport, Dr. Boley and his daughter stop at an eccentric old geezer's road-side 'museum' to check out some promised rare specimens. Unwisely lingering until the sun goes down, they are promptly attacked by unseen creatures in the night - the 'museum' goes up in flames and so does the old geezer. But not before he'd shown Dr. Boley his prize possession, a giant skeleton of an upright humanoid animal with bat-like wings and horns. Uh-oh. 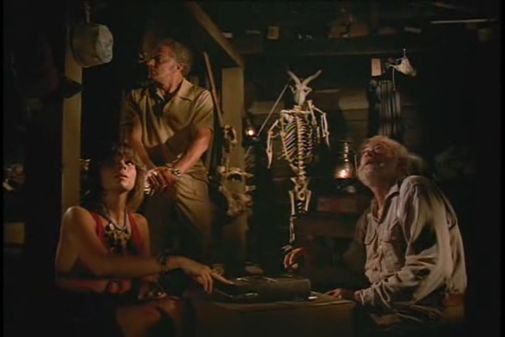 Father and daughter make a tentative escape in their station-wagon as out of the noisome night something large drops onto the roof of their car. That ‘something large’ is a reptilian, scaly-skinned creature who causes the winsome Miss Boley to emit ear-splitting screeches.

This attack is very vividly done, considering the low budget propensities of these sorts of movies and no computer gadgetry. Just great costume, make-up, camera work and stunt tenacity. Was it scary? Yes. But wait, it gets better. 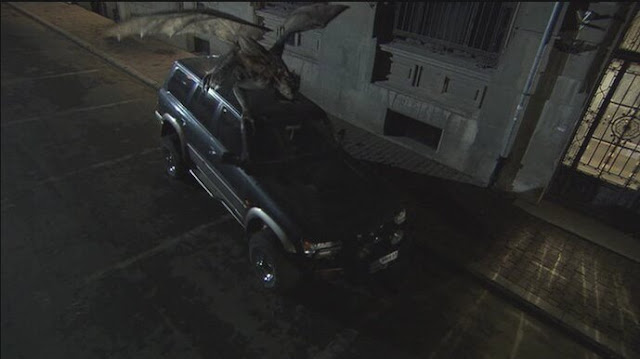 Somehow the much put-upon car makes it to a local gas station in the middle of nowhere - this whole film takes place in as gloomy and desolate a desert town as hasn't been seen since the height of 1950's monster movies. Remember THEM? You get the idea.

The gas station is within walking distance of a convenient motel and oh, by the way, the nearby lonely police station.

Anyway, once Dr. Boley, the daughter, the sheriff and his deputy head out to investigate the museum crime scene, they run into some dirt bikers - one of whom is a young and lanky Scott Glenn in a very early role. The sheriff is eager to close the case so he pounces on the dirt-bikers as likely culprits. Boley and Diana haven't mentioned the 'monsters in the night' thing going on because Boley says they have no real proof - yet. (How about some giant claw marks on the roof of the car?) He is foolishly hoping to keep things quiet until he gets his book written. Yeah, right, that's gonna' work.

Well, one scary thing leads to another and before you know it, Diana has been spirited away by the king of the gargoyles played rather effectively (with some ferocious make-up) by Bernie Casey. 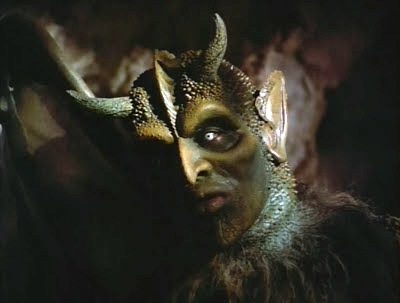 The king is quite taken with the nubile young human with gold hoop earrings and white halter top. (So it wasn't only my brother who lusted after Jennifer Salt back in the day.) Since as explained by the king, gargoyles have been around for thousands of years and they only show up to procreate every few hundred or so years, they have to make optimum use of the time they're allotted.

There is something about the king as played by Bernie Casey, which, after a while humanizes him to the point where you can almost see his point of view. He cannot help who and what he is, he cannot help wanting the survival of his species at all costs. And there is something confoundingly alluring (in a decidedly repellent way) in the unknown, the hideous and mysterious, the idea of winged humanoid creatures. Or maybe it's just Bernie Casey's mesmerizing voice which is so attractive.

At any rate, the gargoyle king drops his captive back at the cave in the hills where the other gargoyles reside. And as these things usually go, a jealous female gargoyle (with more bird-like feathers than the male) instantly catches on that human-girl might be competition. 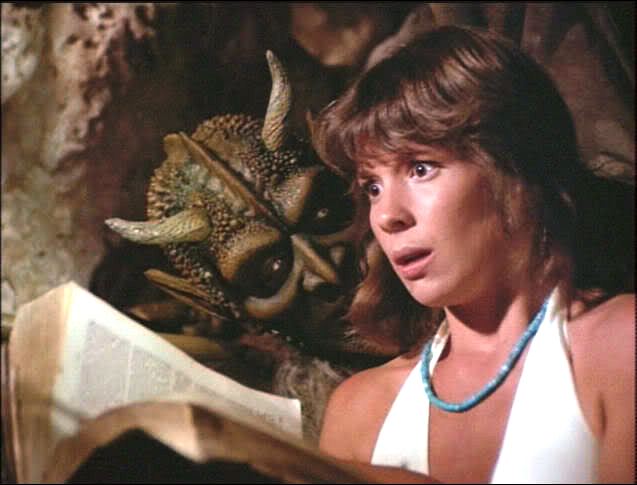 "You must teach me, Diana," says the king. Her father's books have turned up in the cave (I think some of the wingless gargoyle youngsters earlier took them from the motel room or maybe the car), books whose contents the king needs to understand in order to save his species from annihilation. Hey, I don’t know, that’s the explanation. 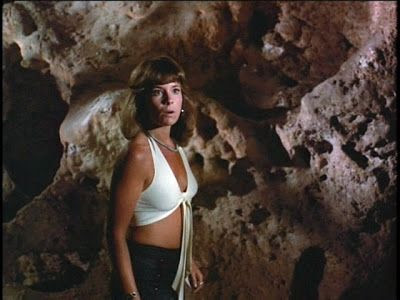 There are lots and lots of scenes showing Diana in her halter top. 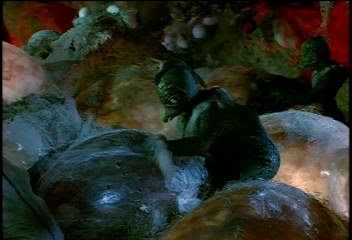 In the meantime, while Diana is learning about gargoyle sociology, the dirt-bikers, the sheriff, the deputy and Dr. Boyle are busy fending off attacks out in the desert as they get closer to the caves.

Boyle will eventually be helped in his endeavor to save his daughter by - you guessed it - the jealous female of the species who is apparently the gargoyle king's mate.

In the end, the doctor decides the eggs must all be destroyed (there are tens of thousands) to save mankind. In the resulting melee, the king and his consort, exhausted and wounded, are allowed to fly away into the night. What happens next? You'll have to wait another 400 to 500 years to find out. 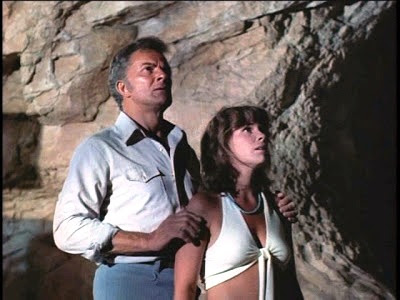 Despite the desperately low budget, lackluster dialogue, wooden acting (except from Bernie Casey who is marvelous) the film is a hoot and does have its creepy moments. You will definitely need some popcorn to wile away the dull stretches - mostly shots of cars driving on deserted highways - and also because movie monsters and popcorn just naturally go together.

I can't quite tell you why I have such lasting (and perhaps idiotic) regard for this movie, but I do. With all its faults and banality of acting, I still remember it fondly. Maybe I just watched it at the right moment in my life, or maybe I just like gargoyles or maybe the whole idea of such creatures in hiding alongside us sparked my imagination. I was never big on 'movies of the week' but this one remains fixed in memory and that's why I didn't mind sharing my enthusiasm and hopefully most of you won't remember the last time I talked about it and we'll just make believe it didn't happen.

Thank you Rick, for allowing me the opportunity to talk yet again about a movie that for whatever reason, remains tucked away in my memory of a time when I was a young mother (my daughter was two) and color television was just becoming the 'norm' - 1972, the year this movie was televised, was also the first year in which color televisions outnumbered black and white sets in the U.S.

Be sure and link to Rick's Classic Film and TV Cafe to see what other Movies of the Week other movie loving bloggers are talking about today.

And as an added treat: link here, to watch GARGOYLES on youtube.