Friday Forgotten (or Overlooked) Book: ANY TWO CAN PLAY (1981) by Elizabeth Cadell 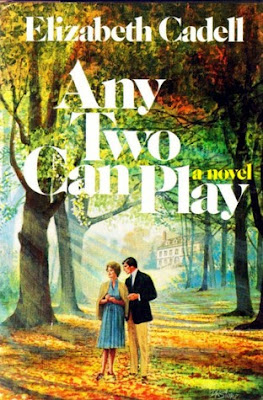 An author I've never read before (never even heard of before), recommended by Nan at LETTERS FROM A HILL FARM. Thank you, Nan.

I'm a big fan of D.E. STEVENSON, ANGELA THIRKELL and E.F. BENSON - each has their own quirky (and often stealthily hilarious) way of telling basically the same story set in an England of long ago, an England made familiar to us by so many BBC and PBS television programs. Thanks to them, we are as familiar with fictional English village life and life up at the manor house as any Englishman or woman, maybe even more so.

I wondered if there were more of these types of stories out there. Happy to say, that Elizabeth Cadell fits the bill though her work is a bit quieter and perhaps a bit gentler than either Thirkell or Benson. She is closest to D.E. Stevenson from what I can tell. Of course if you haven't read any of those authors, then you won't know what I'm talking about - you'll just have to play catch-up. But for those of you who are familiar, then you know whereof I speak.

I did try a couple of other recommended authors from this era and wasn't all that impressed, but Cadell stood out for me. In these times of political turmoil, nothing could be further from reality than her endearing romantic story of village life and English quirkiness. A perfect getaway.

In fact, I will probably begin rereading all of my Thirkell, Stevenson and Benson books - as a way of staying sane - if you know what I mean. (I may even go back and reread all of my Jan Karons. These are desperate times.)

At any rate, back to ANY TWO CAN PLAY.

Elizabeth Cadell (1903 - 1989) was a prolific English author of 52 novels, two of which I've read recently and more of which I hope to read throughout the year. Fortunately, many of them are available on Kindle, though I prefer ordering the actual books in used form whenever possible. But it's nice to know that a bunch are available electronically just in case.

The setting for ANY TWO CAN PLAY is the small and typically gossipy English village of fiction. Downing is just the sort of enclave we love to spend time in when retreating from reality.

Natalie Travers, our accommodating twenty seven year old unmarried heroine, must step in to help her academic younger brother Julian when he is left alone and struggling with twins - his wife having left him and the babies in the lurch. Wifey was of the sort who tried domesticity for a short while but upon deciding it wasn't for her, off to London she went, back to the life preferred.

Julian, who is musical director of a private school, is not exactly parental material himself, as his preference is to be buried in his work or out playing golf. He will willingly leave it up to someone else to step in and handle the chores, take care of the kids and do the heavy lifting of day to day life. Unfortunately, daily help is hard to get in Downing, so his very obliging sister Natalie must temporarily save the day. Natalie, as Julian knows very well, is the sort to be counted on in times of domestic crisis.

Meanwhile, the local manor house owned by Downings immemorial for hundreds of years is apparently on the market. Henry Downing, the wealthy owner who'd been living in Italy, has returned bearing his young nephew who will be enrolled in the local school which Downings immemorial have traditionally attended. Henry is looking to sell his large ungainly ancestral home and as the local golf aficionados are looking to purchase the house to turn into an exclusive golf club, all seems to be moving smoothly towards a mutually approved end.

But soon, Henry becomes taken with village life and especially taken with Natalie, who is herself taken with domesticity and her brother's infant twins. She is independently single and not looking for entanglements but Henry's low-key style and inclination to show up when needed earns her spinsterish approval.

Among the rest of the characters, there's a voraciously hungry baby sitter who will eat anything that isn't hidden away, three dotty Downing aunts - one with a secret, Henry's engaging young nephew and his friend a young African student who, because of revolution in his country has nowhere to go, as well as assorted others including Natalie's stiff-necked older brother who would prefer that she take his advice in all things. and is aghast that she, once again, has offered to help Julian in a crisis of his own making.

There are no real problems or troubles that can't be ironed out between rational people and of course, a happy ending which accommodates all loose ends.

A light and lovely story, delightful and charming and endearing and all those good things that these sorts of books specialize in. But just because the story is light doesn't mean that the writing is lightweight, not at all. Cadell is expert at that sort of thing and her elegant touch and quiet humor is evident, as well as her affection for these sorts of people and their problems. I didn't want the story to end and would have still been reading if there'd been more.

Since this is Friday, don't forget to check in at author and Edgar Award nominee Patrica Abbott's blog, Pattinase, to see what other forgotten or overlooked books other bloggers are talking about today.