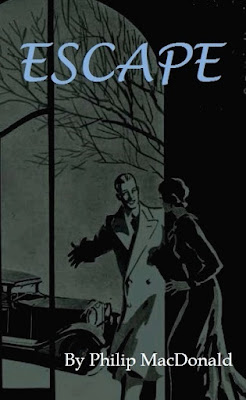 Couldn't find a cover to display for this book so I invented one.


You know how I am, I get a crush on a writer and away I go. Lately I've been crushing on Philip MacDonald's work and so I sent away for a couple of his books (little by little, I hope to read all his mysteries). And am I glad I did. This one is a pip. The perfect momentary 'escape' from our current and provoking political climate.

A guy and gal on the lam from the cops, from a murderer, stealing cars and careering all over the English countryside. I mean, come on, what could be better?

ESCAPE is another delightful escapade from the man who gave us the classic, THE LIST OF ADRIAN MESSENGER and a couple of other humdingers. Not an Anthony Gethryn book, but still a plot committed to excitement and the thrill of the chase. Actually, it's more thriller (in the middle and second half) than mystery since about half way through you do figure out, despite the big red herring, who the killer must be, but that shouldn't dim our enthusiasm by any means.

The main character is Peter Craven, thirty five years old, ex-Army, ex-many things, down on his luck and literally out on the streets without a bean in his pocket. In soiled evening clothes (his landlord took everything else in lieu of rent and only let him have the few clothes he's wearing because he couldn't throw him out on the street naked) Peter is wandering about on a dark London street, no money, no food, no place to go.

He spots a house on a side street from which three women (obviously servants) are leaving - Peter assumes they're taking an evening break and wouldn't all do so together unless the place were empty. So he breaks into the house and helps himself to whatever food he can find. He's famished, one can hardly blame him.

Little does Peter know that this wee bit of breaking and entering will catapult him into a bizarre adventure and role as knight errant. Soon he will be carting a dead body over wintery London streets looking for a convenient dumping ground.

You see, the house isn't empty. There's a mysterious young woman in residence who will intrigue Peter and who will lead him to the dead body of her step-father slumped over a desk in the library upstairs.

(As a result of this, an unbelievable occurrence of the sort which could probably only happen in a book, will shortly unveil itself and we are asked to go along with it willy-nilly. It's up to you to decide if the far-fetchedness of it dooms the book for you. I went along and gullible reader that I am, swallowed it hook line and sinker.)

But from that moment, the chase is on as events spiral out of control for Peter and the young woman (whose name we discover is Frances Brandon) as they flee London and head out into the English countryside, helping themselves to a series of convenient cars along the way.

Eventually in their head long flight, in a remote cottage, Peter and Frances will stumble across a wonderfully written and rather enigmatic man who will guide them in their quest to learn the truth and avoid being charged with murder.

Though, as I mentioned, most of you long time mystery readers will soon decipher who the bad guy is, this is still a fun thrill-ride of a book and since it's Philip MacDonald at the helm, the writing is top-notch.

It's Friday once again, so don't forget to check in at author and Edgar nominee Patricia Abbott's blog, Pattinase, to see what other Forgotten or Overlooked Books other bloggers are talking about today.