Friday Forgotten (or Overlooked) Book: CAT AMONG THE PIGEONS (1960) by Agatha Christie 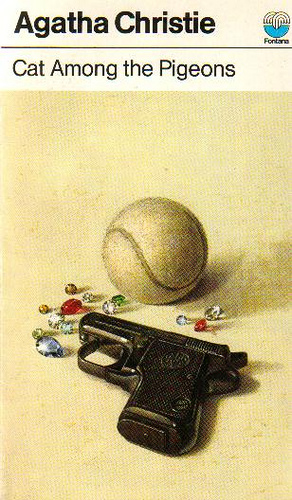 It's possible I've spoken about this book before, if so, forgive me for rattling on about it yet again. But it is among my top five favorite Agatha Christie books so my enthusiasm for it will hopefully be indulged.

CAT AMONG THE PIGEONS is kind of unique in the Christie lexicon in that Hercule Poirot doesn't make an appearance until about two thirds of the way into the story. Everything develops quite nicely without him, moving back and forth as it does, from several points of view and one country to another. Before all dramatis personae are free to convene at Meadowbank School, scene of the various crimes, there is a revolution in the Middle East to be dealt with and a fortune in jewels to be hidden away.

By the time Poirot is summoned to investigate the mystery, two murders (with a third murder yet to come) and a kidnapping will have occurred. He is brought into story by Julia Upjohn, a young school girl who has intelligently figured out a thing or two, decides that an expert in crime is needed to sort things out and goes off to London to call on Poirot. Julia's intrepid mother is at the moment traveling to Anatolia (Turkey) on a bus and therefore incommunicado, but Julia's self-sufficiency comes to the rescue since she, unlike her gullible friend Jennifer, fully understands the meaning of the Arabian Nights story of 'new lamps for old'.

Meadowbank is an exclusive private English boarding school, the fulfillment of the life's work of two women: imposing Miss Bulstrode, head honcho respected by all and admired by many and the much less imposing but dependable Miss Chadwick, an older bustling sort, ready to smooth any ruffled waters and a math whiz besides. But in general, what Miss Bulstrode says, goes and just as well - she is the senior partner. The school has an excellent reputation and attracts girls from all over England and Europe. The two women are very proud of their accomplishment.

Early on we learn that Miss Bulstrode has lately been thinking of retiring and everyone assumes she will turn the school over to the redoubtable Miss Vansittart who is an exact copy of the Bulstrode in manner, voice and one supposes, thought. But Miss Bulstrode has doubts.

In the meantime, the new term begins and before you can swing a tennis racket, Miss Springer the gym teacher is shot dead late at night in the new gym or 'sports pavillion'. It is known that Miss Springer liked to pry.

A low-key investigation ensues since the police value the school and champion Miss Bulstrode. She calls in a few favors from old government friends and gets the story down-played in the papers. A couple of girls are withdrawn from the school by their parents and/or guardians but no major harm done.

That is, until the kidnapping of a princess and the second murder of another school mistress.

This is really one of Agatha Christie's more fiendish plots though there is a kind of snafu at the beginning which only becomes apparent after the story is nearly done. It's one of those, well why didn't she make a bigger fuss about what she saw?? But other than that, it's a book I never get tired of re-reading. It has a grand list of characters, including two realistic young girls very much of their time and place, amusing dialogue, clever plot machinations, a vicious killer hiding in plain sight, international complications, the sleepy Colonel Pikeaway, not to mention, the mysterious Mr. Robinson and last but not least, MI-6.

I might not begin here if I'd never read any Christie before, since Hercule Poirot arrives as a fully fashioned figure already many years into his career (career apres retirement, that is), but then again, why not?

Since it's Friday, don't forget to check in at Edgar nominated author Patricia Abbott's blog, Pattinase, to see what other forgotten or overlooked books other bloggers are talking about today.