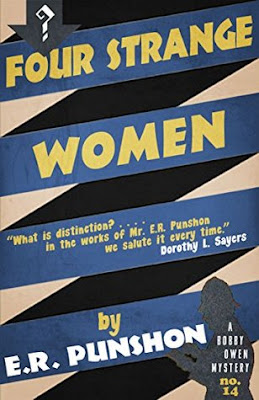 A rather strange book aptly titled, I think. Not in the same class as Christie or the other fine writers of the Golden Age, but still a book that intrigues. It is a dark tale in which terrible crimes occur but perhaps it is the theatrical improbability of it all that appealed to me. I can't quite say why I liked it so much, but I did. The whole idea of an unknown femme fatale driving men to their doom inspires a kind of macabre fun.

British author E.R. Punshon wrote quite a few Bobby Owen mysteries and this the fourteenth in the series. Several of the books are currently available as ebooks over at Amazon and that's where I happened onto them. Though I must say that nowhere in this book does the character of Bobby Owen come alive as a 'real' person or for that matter, an especially clever one. But for whatever reason, that didn't stop me being intrigued by this morbid tale of murder which begins cozily enough.

'The fortunate conclusion of a recent semi-private investigation on which he [Bobby Owen]had been engaged had put money in his pocket, won him influential friends, and gained him the promise of an appointment as inspector in the Wychshire country force with special duties as private secretary to the elderly Colonel Glynne, and with the additional prospect, therefore, of some day succeeding him as chief constable.'

So here we are immediately lulled into believing that a cozy set of circumstances will be coming right up. But we would be wrong. Little does the complacent Bobby Owen know as he strolls along on his way home from an evening out with his fiancee Olive, that that very night he will be drawn into a shocking and most mysterious case.

'...he opened his sitting-room. One of the ugliest men he had ever seen was there and got up as he entered. A low forehead; a long, crooked nose; a mouth framing teeth too widely separated and irregular in shape, and stretching, it seemed, almost from ear to ear; ears themselves enormous and standing out nearly at right angles; eyes small and hidden, indeterminate in colour, the left eye with a cast in it; all combined with a squat, ungainly figure and sprawling hands and feet to produce an effect so remarkable that Bobby found himself reflecting that fingerprints would hardly be required for identification if the Records Department at the Yard knew anything of him.'

Unlikely as it may seem, the unattractive late night caller is Lord Darmoor, a man concerned with the mysterious deaths of two acquaintances and the likely possibility that a third friend might be in danger.

FOUR STRANGE WOMEN (love that title) is, in essence, a serial killer book written at a time when such a thing didn't even have a name. It is also a book in which the serial killer is a woman, another odd thing for its time. (Though I'll bet that in reality such a thing was not unknown.) Look, I'm not revealing any real secrets, it's obvious to any mystery reader almost from the very beginning that this book is all about 'cherchez la femme.'

Punshon is not, it seems to me, a natural writer so his work can get a little clumsy, but not to the point of making you want to put it down (at least it didn't with me) because he has a good story to tell. Here's a case where cleverness of plot plus mood equals a good read even if the writing is not brilliant.

Detective-Sergeant Bobby Owen is called into a very odd case when an unlikely couple come to his lodgings and spin him a most peculiar tale. Two men (one with a title) have already died under suspicious circumstances and a third is likely in danger. The circumstances leading up to the deaths are similar though the police regard most of it as coincidence. However, once Owen begins nosing around, it becomes obvious that something foul is amiss. And when a third nasty death does occur, Owen is convinced that there's a fourth coming up unless the police can get to the bottom of the mystery and quickly.

As I indicated, this story features a most unlikely set of circumstances which include a remarkably heartless killer who is all things to all men in a very peculiar and hypnotic way. (Maybe you have to be a man to get it.) Again, suspension of disbelief is called for and even if you can't quite believe what's happening, there's something yet alluring about this dark tale of murderous greed and moral vacuousness (not to mention the foolhardiness of men) which kept me reading late into the night.

Dorothy L. Sayer was a fan of Punshon, I understand. Maybe I'll be one too.

Since it's Friday, don't forget to check in and see what other forgotten or overlooked books other bloggers are talking about today over at Todd Mason's blog, Sweet Freedom. Todd is doing hosting duties this week for Patti Abbott.