Friday Forgotten Book - BEST FIRST IN A SERIES: CROCODILE ON THE SANDBANK by Elizabeth Peters 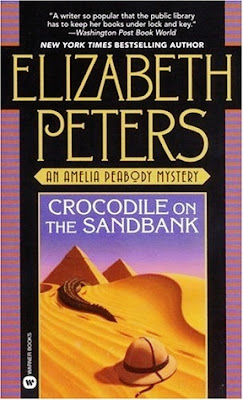 CROCODILE ON THE SANDBANK is the first episode (if you will) in the Amelia Peabody series of 19 books, begun back in 1975 and completed in 2010 with A RIVER IN THE SKY. (Author Elizabeth Peters - aka Barbara Mertz - passed away at the age of 85 in 2013)

The author had a PhD in Egyptology and traveled extensively, so she knew whereof she wrote when it came to the setting of her series: Egypt at the end of the 19th and the beginning of the 20th century. The prolific Ms. Peters was a Mystery Writers of America Grand Master and also the author of mysteries (many with gothic overtones) under the second pseudonym of Barbara Michaels.

In CROCODILE ON THE SANDBANK we meet Peters' greatest creation, the unforgettable Victorian spinster/archaeologist Amelia Peabody. Well, she doesn't remain a spinster for long, but here in this first book, she is the quintessentially acerbic, strong-minded, opinionated (but essentially likable) blue stocking spinster beloved of certain readers. The story is told in the first person, so we are instantly propelled into Peabody's psyche when she makes it known she will not suffer fools lightly, she has 'purpose enough for two' and goes on immediately to prove it by using her inheritance (from an anthropologist father whom no one realized had a fortune to leave) to fulfill her dream of travel and adventure. All this independence is too much for her affronted brothers who immediately threaten to contest their father's will siting undue influence. Amelia's lawyer assures her the will is unbreakable and not to worry.

The transparent attempts of my kin, and of various unemployed gentlemen, to win my regard, aroused in me a grim amusement. I did not put them off; quite the contrary, I encouraged them to visit, and laughed up my sleeve at their clumsy efforts. Then it occurred to me that I was enjoying them too much. I was becoming cynical; and it was this character development that made me decide to leave England - not, as some malicious persons have intimated, a fear of being overborne. I had always wanted to travel. Now, I decided, I would see all the places Father had studied - the glory that was Greece and the glory that was Greece and the grandeur that was Rome; Babylon and hundred-gated Thebes.

Once I had made this decision, it did not take me long to prepare for the journey. I made my arrangements with Mr. Fletcher, and received from him a proposal of marriage which I refused with the same good humor that had characterized the offer. At least he was honest.

"I thought it was worth a try," he remarked calmly.
"Nothing ventured, nothing gained," I agreed.
Mr. Fletcher studied me thoughtfully for a moment.
"Miss Amelia, may I ask - in my professional capacity now - whether you have any inclinations toward matrimony?"
"None. I disapprove of matrimony as a matter of principle." Mr. Fletcher's pepper-and-salt eyebrows lifted. I added, "For myself, that is. I suppose it is well enough for some women; what else can the poor things do? But why should any independent, intelligent female choose to subject herself to the whims and tyrannies of a husband? I assure you, I have yet to meet a man as sensible as myself."

So Peadbody takes the money and goes off to the Continent, ready for adventure and whatever comes her way.

In Rome, after having lost her insipid traveling companion to illness, she picks up Evelyn Barton-Forbes, a young heiress down on her luck (in fact, when Amelia first sees her, Evelyn is in a dead faint, collapsed from hunger on a street near the Coliseum). Evelyn has been cut off from her family after committing the unspeakable sin of running off with a handsome (but oily) music teacher. Now abandoned and left to fend for herself, Evelyn quickly becomes Peabody's companion after confessing her misdeeds which (to Evelyn's consternation) are pooh-poohed by the liberal thinking Peabody who considers herself a 'modern woman'.

When the two arrive in Egypt, the fun begins.

Within the over-crowded recesses of the Cairo Museum, Amelia comes up against a will as strong as her own in the crazed, disheveled, unkempt, ill-mannered, wildly bearded archaeologist, Radcliffe Emerson. He and his mild-mannered brother Walter (who is instantly smitten by Evelyn Barton-Forbes) are looking through the displays, Emerson frothing at the mouth over the criminal ineptness of the museum's curators. A theme which will continue throughout all nineteen books since Emerson considers himself the greatest living archaeologist and the only one who cares enough to properly classify archaeological finds. He is known as 'the father of curses,' by the native Egyptians for his rather colorful vocabulary when provoked - which is often.

For me, Emerson is the linchpin of these novels, in fact (next to Austen's Mr. Darcy and Georgette Heyer's Freddy Standon and/or Mr. Beaumaris), Emerson is the only fictional man that I'd ever consider marrying). He is a larger than life individual, an amalgam of all those dashing, handsome, wild-spirited heroes prevalent in books of the era. Yes, I know he is over-the-top and in reality would be impossible to live with, but he so wonderfully crazed and outrageous, not to mention extraordinarily sexy in his archaeological outfit of ubiquitous white shirt unbuttoned halfway down his broad chest, sleeves rolled up to reveal tanned muscular arms, tight jodhpurs and, of course, leather boots. Is Amelia immune to all this male pulchritude? Read the book and see.

Once Peabody decides that Egyptology is her passion, there is no stopping her. And here in the first book, author Elizabeth Peters makes sure we get the full Egyptological effect: a howling mummy skulking about in the dead of night - an eerie creature who has the temerity to show up in Peabody's bedroom at Shepheard's Hotel (where everyone who is anyone stays while in Cairo). Some of us may roll our eyes, but let's face it, what is a tale of thrilling archaeological adventure without a mummy? Not to worry, all is revealed and explained in the very satisfying ending.

But before we get there, we have skulduggery of the vilest form aimed at the two Victorian gentlewomen. The mummy (in cahoots with a smarmy fortune hunter - hissss!!) shows up at the Emerson brothers' excavation site and causes all sorts of villainous complications.

In Emerson, Peabody has met her match (he shaves his unruly beard and she discovers - gasp! - that he has a sexy cleft in his chin) - so hard to resist. Her companion Evelyn Barton-Forbes finds true love in the person of Walter Emerson, the more sedate (and well-mannered) of the two brothers and in the end several nasty evil-doers are dealt with.

But it's the tone of the entire proceeding that I find so beguiling. Amelia's inchoate superiority (with cause), her intelligence, her competence, her essential kind-heartedness, her assumption that all will be as she wishes - makes her a definite force to be reckoned with.

This is a clever, amusing romp (did I just use the word 'romp'?) - in fact most of the books in the series are unabashed satires of the sort of thrillers popular at the end of the 19th century and the early 20th (H. Rider Haggard and his ilk), written in mock Victorian style. The author assumes you are on the same wave-length and have a little knowledge of the absurdity of Victorian society and mores, not to mention the wordy and occasionally overwrought writing style of the times (think Wilkie Collins too). I loved CROCODILE ON THE SANDBANK when I first read it, and my ardor hasn't lessened in the many re-readings since.

As an aside: Over the life of these books, Peabody and cohorts will go on to rub elbows with actual historical figures, i.e. Howard Carter (who will later discover the Tomb of Tutankhamun), Monsieur Mospero (whom Emerson despises), director of the Cairo Museum, Flinders Petrie, famed achaeologist and others. For me this is part of the fun.


Now since it's Friday once again, don't forget to check in at author Patricia Abbott's website, Pattinase, to see what other books other bloggers are talking about today.

This is a very fun fan production I found on youtube. But oh how I wish someone would make an actual movie out this book!! In a couple more years Emma Watson would be perfect in the part of Amelia.