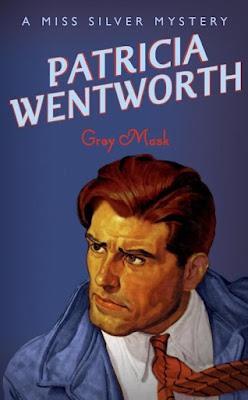 (Incidentally - I have, since writing this review, learned that almost all of Patricia Wentworth's books are available for free reading in ebook form, at this link, fadedpage.com. The copyrights have mostly expired in Canada.)

The Miss Silver mysteries by the prolific author, Patricia Wentworth are, without doubt, a mixed bag. The series lasted for many years, beginning in 1928 and lasting through until the last Miss Silver published in 1961, the year of Miss Wentworth's death. I remember reading and enjoying quite a few of the books and then for whatever reason I got bogged down in a slew of bad ones and gave up on Wentworth. (Sometimes that happens over the span of a long series.)

But now, yearning lately for cozy vintage reads, I'm returning and attempting to navigate through the Miss Silvers as best I can since they are suddenly available on Kindle and in hard copy form from Abe Books and even occasionally over at Project Gutenberg Canada, where several of the copyrights have expired. AND I've just discovered that a bunch of 'em are available in ebook format from my local N.C. library. (More than was available in N.J. - go figure.)

Miss Silver is often compared to Agatha Christie's Miss Marple. But in my view the only thing the two women have in common is that they are, indeed, two women who solve mysteries. Oh, and they like to knit. But that's about it. In my view, Miss Marple never once worked for a living where Miss Silver is a retired school teacher turned private eye. Christie is the better writer and plotter and her Miss Marple is a more memorable character, though both made their debuts in print around the same time. (Miss Marple in 1927 in a short story, THE TUESDAY NIGHT CLUB and Miss Silver in 1928 in GREY MASK, today's book for review.)

Going in, I'll say that I enjoyed this thoroughly archaic but always entertaining first Miss Silver mystery. Yes, there are anachronisms galore, but for some reason they just add to the enjoyment. I mean, the head criminal honcho goes about in a grey mas (I'm spelling it in the Brit way) and nobody knows who he is. You gotta' love this sort of thing and I do - when it catches me up from the beginning and makes me smile in recognition, as if the writer and I were sharing a joke. Even if I know that's not possible since when this book was written, men in masks were not to be sneered at. But still, that's how I approach it.

Though in this book the detective and her detection remain mostly in the background (not something I usually like), it remains a particularly good debut mystery and has plenty of what I turn to vintage cozy mysteries for. The atmosphere makes up for a lot here. In execution, the writing style reminded me a bit of Philip MacDonald's early work.

However, as a character, Miss Silver is not an especially agreeable or personable one and rarely if ever, comes to resemble a real person. She remains, far as I'm concerned, a clever fairy godmother type with omniscient powers and a very irritating cough, who shows up intermittently in the plot and in the end comes forward wisely to solve the mystery. And yet, somehow, the author makes this work most of the time. Maud Silver's main talent as I see it, is that she is the sort of person to whom people can't help spilling their guts. Couple this with a knack for planning and thinking ahead and you have a fairly decent detective. Yet it does still seem a bit odd that people actually step forward to hire a little old lady (not that old in the beginning, I'm thinking) to solve a crime.

With Jane Marple, there was no hiring to be done except, perhaps, in NEMESIS - in which Miss Marple is 'hired' from beyond the grave by a dead multi-millionaire and his strange bequest.

But Maud Silver is different, she actually has a private detection business - once you overlook that incongruity, the rest of it either falls into place for you or it doesn't. Suspension of disbelief is the order of the day.

Okay, now on to GREY MASK, the plot:

Charles Moray is an embittered young man who returns to England four years after being jilted by Margaret Langton, a woman he still loves. He has come to claim an inheritance - the house he grew up in - and while staying at a London hotel, can't resist going (in the dead of night) to reconnoitre the old family home.

While lurking about the darkened estate, Moray overhears a conversation which makes him suspect that the house is being used for some sort of criminal activity. He manages to get a glimpse of several men, one of whom is wearing - you guessed it - a grey mask. Not only that, but just as Charles makes up his mind to go for the police, who should enter the room but his lost lady love Margaret Langton, there to deliver some papers. Charles now comes away from the place, confused, angry and determined to save the woman he loves even if she is involved in a criminal enterprise.

The bad guys are after the money a ditzy young heiress may be about to inherit if she can prove her bonafides, her name is Margot Standing, (I know, Margot, Margaret, and yet another Margaret in the background - confusing) whose father left no will. Well, Margot runs away from the sinister forces gathering around her and lo and behold winds up staying with Margaret Langton who may or may not turn her over to Grey Mask. In the meantime,  Margaret warns Charles to stay away and leave her to her cruel fate. But Charles is made of sterner stuff and he is determined to prove extenuating circumstances as he goes ahead and hires Miss Silver to find out the truth, break up a criminal gang and in the bargain, save Miss Langton from the hoosegow.

A terrific book if you can swallow the anachronisms and I did.

Since it's Friday, don't forget to check in at author Patti Abbott's blog, Pattinase, to see what other Forgotten or Overlooked Books other bloggers are talking about today.