Friday Forgotten (or Overlooked) Book: THE CASE OF THE JOURNEYING BOY (1949) by Michael Innes 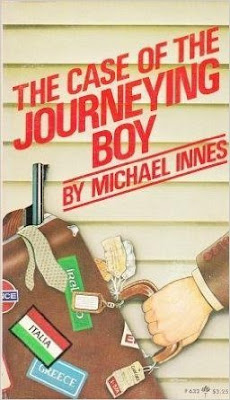 Michael Innes, as many of us may know, was capable of turning on his scholarly brilliance and eluding his readers, occasionally leaving them in the dust. But I'm happy to state that THE CASE OF THE JOURNEYING BOY is prime evidence of Innes' inexhaustible wit, erudition and yes, approachable brilliance. I'm currently in the middle of a re-read and enjoying it as much as I did the first time around.

Yes, I am an unabashed Michael Innes fan and though I promised last year not to go overboard with reviews of his books, I didn't promise never to write one again. So here we are.

I might have featured THE CASE OF THE JOURNEYING BOY on the Tuesday Night Bloggers' Murder and Travel meme hosted by The Passing Tramp, but I didn't learn about the subject matter until this week, so I missed out contributing. But along the lines of better late than never, I'm writing up this book for FFB.


"What past can be yours, O journeying boy,
Towards a world unknown,
who calmly, as if incurious quite
On all at stake, can undertake
This plunge alone?"
Thomas Hardy

THE CASE OF THE JOURNEYING BOY features one of Innes' most ingenious spins on mystery, adventure, thrills, chills and spills and an unlikely pair of heroes. With Innes you never know what to expect and this particular story is one of his most intriguing and one in which you must pay close attention to the early details OR you risk getting lost along the way. Just when you think it's one thing, it turns out that it's quite another. Fair warning.

The book also features two protagonists which take a while to warm up to and that's fine with me, because in the end you do warm up to them and realize, looking back, why they had to be as they are.

Humphrey Paxton is the troubled teen-age son of British physicist Sir Bernard Paxton, father and son live in quiet splendor in a beautifully refined mansion in one of London's enclaves for the wealthy. The school term has ended and the solemn scientist is interviewing tutors who will accompany Humphrey to relatives in Ireland, there to spend the summer in rural pursuits. Pursuits which will, hopefully, help Humphrey get over whatever is bothering him. The boy is prone to lying, grandiosity, odd fits and spurts and tales of spies and blackmail. Typical bad boy stunts? Sir Paxton, though a brilliant atomic scientist, is confused and anxious when it comes to his son's behavior. Hence his search for a proper companion to help set his boy straight.

The tutor who eventually accompanies Humphrey to Ireland is a certain Mr. Richard Thewless who is, too, confused, especially once the pair boards the train on the first leg of the trip.

Why didn't Sir Bernard accompany Humphrey to the train station as he originally meant to do? Why did Humphrey insist on Mr. Thewless's proving his identification with an ingenious ploy? Why is Humphrey at first hyper and then regressively passive? Who is that bearded man with the new fishing gear stowed in his luggage? Who is the chatty old lady across the way reading a spy novel? Why does Humphrey disappear from the compartment mid-trip? And after an alarmed Mr. Thewless searches for him, encountering a slew of odd travelers, why does a disheveled Humphrey suddenly reappear with no creditable explanation?

(This part of the novel appears to be an homage to Hitchcock's 1938 film, THE LADY VANISHES -based on the 1936 novel, THE WHEEL SPINS by Ethel Lina White - since Innes includes a mysteriously bandaged patient, a large coffin-like package lifted off the train to a waiting limo, and strange circus folk.)

Mr. Thewless, not ordinarily given to flights of any sort of fancy, nevertheless, allows himself to invent all sorts of scenarios which might explain Humphrey's behavior and his own reaction to said behavior as well as that of their fellow travelers.

On the verge of suspecting Humphrey of being an imposter, Thewless shakes off his mental agitations and before they board the night steamer to Belfast, he reaffirms his belief that Humphrey is just what he seems to be: a troubled boy venturing forth - tutor in tow - to spend time in the country with relatives.

Meanwhile, back in London: a man seen entering the Metrodome movie theater alongside a boy and perhaps a woman, has been found dead in his seat - shot during a showing of Plutonium Blonde, a lurid B-movie thriller which feeds on the fears of the public - remember it is l949. The incident naturally brings in Scotland Yard, this time in the person of Inspector Cadover. Questions immediately arise: why has every vestige of identification been cut from the dead man's clothing,? How was this accomplished in a crowded theater? For that matter - why didn't anyone hear the shot? Where is the boy? Was the woman involved in the killing?

One of several bits that I especially liked at the beginning of the story: chapter 3 cleverly consists of nothing but letters and notes between several characters - some of whom we have not yet met.

See why I told you to pay attention to details? Occasionally I find Michael Innes' set-ups to murder a bit long-winded, but here everything clicks just as it ought to. Innes is fashioning a finely woven tale and patience is most assuredly a virtue.

The story holds together, shifting back and forth between Ireland and London as Scotland Yard quietly goes about a murder investigation in a book which is a clever conceit - a combo of police procedural and hair-raising spy thriller as only Michael Innes could conceive of it. Will the cops finally put two and two together? Will Humphrey and Mr. Thewless be able to evade the evil that is gathering around them? The answer will come after a most exciting and unnerving chase along a dangerous stretch of Irish coast.

Needless to say, I recommend THE CASE OF THE JOURNEYING BOY very highly - it remains one of my favorite Innes books. It is a wonder to me, that it was never made into a film. Or if it was, I've never heard of it.

Since it's Friday, we would normally head on over to Patti Abbott's blog to see what other forgotten or overlooked books other bloggers are talking about. But this week it's Todd Mason doing hosting duties at his blog, Sweet Freedom.