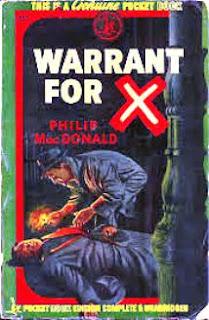 First off: If the plot sounds familiar, this is the book upon which the so/so Van Johnson movie 23 PACES TO BAKER STREET was based. The screenplay made drastic changes including getting rid of Anthony Gethryn's charismatic presence and making the American playwright hero (played by Johnson) blind. So let's forget about it and concentrate on the source material today.

I'm really fond of the work of Philip MacDonald (of THE LIST OF ADRIAN MESSENGER fame), having recently read (for the first time) and enjoyed, THE RASP, MURDER GONE MAD, and MYSTERY OF THE DEAD POLICE. And now, WARRANT FOR X, which is the 11th in the Anthony Gethryn series and for me, so far, the very best of a pretty good bunch. (I gave it five stars in my listing.)

Link here for a complete listing of Philip MacDonald's books.

I read WARRANT FOR X aka THE NURSEMAID WHO DISAPPEARED recently and enjoyed every moment. I'm crazy about stories that draw me in and don't want to let me go. I only wish the book was twice as long, but maybe then I wouldn't have been able to stand the excitement.

WARRANT FOR X begins in the company of a successful American playwright alone in London with not much to do. Sheldon Garrett celebrates his 34th birthday alone and reading for the first time ever, a story by the eminent philosophical and mystery great G.K. Chesterton. Thus, influenced by the author, Garret takes a bus and finds himself wandering the lonely streets of Notting Hill where, lost in a maze of dark and unfamiliar byways, he finally stumbles into an empty tea shop near closing time.

When two women enter the shop and head for a booth nearby, Garret overhears a whispered conversation which convinces him that a crime involving a child is about to be committed. Luckily the two women remain unaware of Garret sitting in the shadows.

He decides to follow the two when they leave but soon loses them in the throng of London. What to do next? Well, he goes to Scotland Yard, but without much more to tell them that what he'd heard, they dismiss his story as being unlikely.

Fortunately, Avis Bellingham, the nice society woman Garret has fallen in love with (though they are currently mired in one of those foolish misunderstandings which only seem to occur in books) happens to know Lucia Gethryn, wife of the brilliant Anthony. He, of course, is the well-known solver of crimes and interpreter of puzzles too complex for the official police. A dinner invitation is issued.

After hearing Garret's tale, Anthony Gethryn agrees that a dastardly plot is certainly afoot. And before you can say hop, skip and/or jump, they are on the trail of some very dangerous people. What follows is an intriguing hodgepodge of blackmail, suicide, several nasty murders - actual and attempted murder - a kidnapping, more attempted murder, all amid the kind of inspired misdirection we haven't seen (or at least, I haven't) since I don't know when.

Of course, the book was published in 1938, so there is some creakiness at the joints, but on the whole, nothing to bother about. Philip MacDonald's writing is intelligent, fast-paced and mostly to the point. We hang on for dear life as Gethryn and Garrett, along with the police (finally) attempt to prevent a heinous crime from taking place. Clue after clue is unraveled, often times making things more complex rather than less. Time is of the essence as page after page, things seem darkest before the dawn and their prey remains more elusive than ever. What a thrilling tale.

WARRANT FOR X is definitely my kind of book. Perfect (and easy enough to get online for very little cash) if you're mired in the winter doldrums or soon enough will be. I might save it for January when things always seem dull and dreary. (I know, do as I say, not as I do.)

P.S. Don't forget to check in at author Patricia Abbott's blog, Pattinase, to see what other forgotten or overlooked books other bloggers are talking about on this Friday.