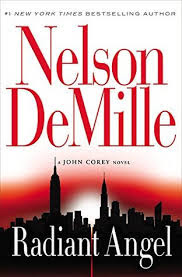 The only thing I didn't like about this book and it's only because I'm squeamish, were several scenes of disturbing violence, other than that I'm highly recommending RADIANT ANGEL to any reader who loves a suspenseful, thrill packed adventure yarn where all the good guys are working towards a common and worthy goal, in this instance, saving Manhattan from annihilation. Not telling you too much, all this is pretty evident in the quickly moving early chapters. Besides, the title and cover really say it all.

Re: the violence - you can always skim, i.e. look the other way. That's what I do.

The bad guys in this, one of Nelson DeMille's more fast-paced books, are not those whom we might have expected which makes for a nice break in the action. Know what I mean? And again, no I'm not revealing too much.

There is an enviable knack, maybe even a genius, to telling a good rip-roaring story that makes it almost impossible to put a book down until you get to the end and Nelson DeMille has it. I read RADIANT ANGEL in two large bouts of reading late into the night. Luckily this was not the usual lengthy tome we normally get from DeMille (not that there's anything wrong with that), no, this is slightly shorter and more action condensed DeMille and the story doesn't suffer for it. This is atypical DeMille, but still excellent.

Before we go any further let me just add that I've read most of Nelson DeMille's fiction except three -and the ones written under various pseudonyms which I never knew existed until recently - and I've enjoyed and admired everything of his that I've read except two. Nah, I'm not gonna' tell you which two. Cause who am I to diminish your possible enjoyment? And besides, I'm definitely in the minority.

Of all DeMille's many protagonists, my favorite is John Corey whom we meet again in RADIANT ANGEL. We initially came across (now former) NYC homicide detective Corey on his way to bust up a frightening conspiracy in PLUM ISLAND, the first book. Since then there have been five more with RADIANT ANGEL being the very latest.

Corey has worked for several government agencies including the FBI but seems constantly to be moving about from job to job since he is known for being a maverick (that's why his bosses try and try and try to keep a tight rein on him). He is also an unorthodox thinker, a screw-up, and occasionally a loose cannon. Most of all, I think, the higher-ups despise Corey for his refusal to go along to get along, his complete lack of political awareness (the source of some of his funnier and more wince-inducing epitapths) and his wicked and totally inappropriate sense of humor - he has that in abundance.

These are some of the main reasons why I love this character - that and the fact that he gets things done when others are still fumbling about trying to figure out what to do. Corey can reason quickly and has an uncanny knack for linking a and b and correctly deducing z. In an out of control world filled with evil doers, this is a mighty welcome talent - you'd think.

In RADIANT ANGEL, Corey is now back in NYC (his wife still works for the FBI and commutes between the city and Washington D.C.), working for the DSG (Diplomatic Surveillance Group) keeping an eye on Russian diplomats working at the U.N. This job is thought to be a nice quiet dead end resting place for Corey after his run in with the CIA while battling terrorists in Yemen in the last book. But you know, where John Corey goes, trouble always seems to follow. Thank goodness.

While on a routine weekend surveillance Corey and his fellow watchers are scooped up into a quickly escalating crisis of the sort that might seem fanciful if not for the fact that the world today is what it is.

"I was parked in a black Chevy Blazer down the street from the Russian Federation Mission to the United Nations on East 67th Street in Manhattan, waiting for an asshole named Vasily Petrov to appear. Petrov is a colonel in the Russian Foreign Intelligence Service - the SVR in Russian - which is the equivalent to our CIA, and the successor to the Soviet KGB. Vasily - who we have affectionately code-named Vaseline, because he's slippery - has diplomatic status as Deputy Representative to the United Nations for Human Rights Issues, which is a joke because his real job is SVR Legal Resident in New York - the equivalent of a CIA Station Chief. I have had Colonel Petrov under the eye on previous occasions, and though I've never met him he's reported to be a very dangerous man, and thus an asshole."

Corey has a way with words.

Read this only if you have a few hours to set aside because I guarantee you will not (or at least not until the wee hours of the morning) be able to put this book down until you get to the nail-bitingly fabulous end.

And yes, you may read this even if you haven't read any of the others books in the series. You can always go back and see what happened when and why Corey's marriage is a bit rocky right now.

I hope there will be more of John Corey in the future because I am definitely not ready to say goodbye.