Friday Forgotten (or Overlooked) Book: THE MAN WITH A LOAD OF MISCHIEF by Martha Grimes 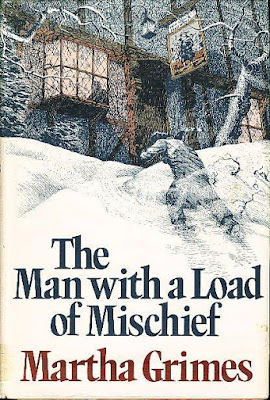 This is the first Richard Jury mystery and the one which introduces us to the nicely neurotic inhabitants of Long Piddleton. The setting is a snowy picture postcard English village, cozily nestled on the banks of the River Piddle. It's the Christmas season but that hasn't stopped a murderer from going about his nefarious duties.

When a dead body is found stuck in a keg of beer at The Man With A Load of Mischief pub (all Jury books are titled after existing English pubs), followed by yet another dead body later found tucked in the mechanical sign above the front door of the Jack and Hammer (Long Piddleton's not so friendly neighborhood pub), well, it's time for Scotland Yard in the form of Richard Jury to make an appearance. Not that that puts paid to the killings in this small village in Northants.

Detective Chief Inspector Jury is tall, handsome, languid, lonely, given to intuitive flashes and incapable of finding the right woman (no matter if she is right in front of his nose). Yet he possesses a smile which is supposed to stop women (and anyone else) in their tracks. Go figure. He is also a man whom children instinctively trust and divulge their secrets to. An especially important trait in a Martha Grimes book.

Here we also meet, for the first time, the charming and very cavalier Melrose Plant, a man who, for reasons which become obvious over the length of the series, has given up his title as Earl of Caverness. Given up the title, yes, but not the mien. Still, he is pretty down to earth for a man of luxurious lifestyle complete with mansion and butler. Now if only he could get rid of his annoyingly batty aunt, all would be perfection.

So who is responsible for the rather unsightly Long Piddleton killing spree?

One would immediately jump to the conclusion that I'm talking about a series of cozies, but one would be wrong. Author Martha Grimes has invented a style of story which should be discordant, but to my mind is not; she has managed to combine the ambience of the cozy (along with the requisite cast of assorted eccentrics) with the deeper, darker ambience of the police procedural/thriller. The crimes themselves are often ugly and the solutions never pat. Happy endings for all involved do not abound except very occasionally. One just never knows how a Jury book is going to turn out. If you cannot acclimate yourself to this sort of thing, then the series is not for you.

Too bad because for wit, intelligence and imagination, you can't top Martha Grimes.  In so many ways she is unique in the world of genre (if you care to describe it like that) fiction.

I've read THE MAN WITH A LOAD OF MISCHIEF a couple of times and have also listened to the audio version narrated superbly by Steve West. It's up to you how you choose to begin this series (not that it really needs to be read in order), if you choose to begin it and I say: please do.

I've written about Richard Jury before since he remains one of my favorite characters in fiction (and one of my huge crushes) and over the years I've read every single Jury book. (But don't ask me for synopsis of plots please, the spirit is willing but the memory banks are depleted.) You must trust me when I say that on the whole, I've enjoyed almost every single one and it is a series I recommend highly.

(And no I don't mind the inclusion of dogs and cats of varying personalities, names and antics. I like the element of other-worldliness they add to the stories.)

Link here for a complete list of Richard Jury books by Martha Grimes.

Since it's Friday, don't forget to check in at author Patricia Abbott's blog, Pattinase, to see what other forgotten or overlooked holiday-themed books other bloggers are talking about today.
Posted by Yvette at 12:30 AM