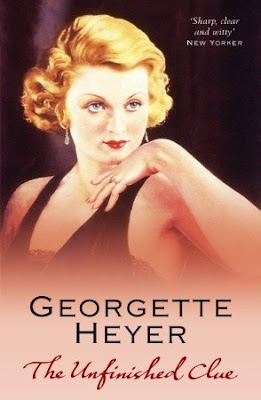 Georgette Heyer is best known for her sparkling Regency romances which are read, reread and loved by millions - myself included - but she also wrote several mysteries which (in my view) rival Agatha Christie and the rest of the Golden Agers. The only problem is that she didn't write enough of them.

However, those that exist are a delight if you, like me, love a good cozy British mystery with a dastardly murder (usually of the wealthy head of the family whose money everyone covets) and a cast of the usual country house suspects.

Over the years I've read all the Heyer Regencies and all the mysteries and lately I've been listening to both on audio and enjoying them again as if for the first time. (One good thing to be said for faulty old lady memory.)

My enjoyment of THE UNFINISHED CLUE is due, of course, to the terrific writing of Heyer, but also to the wonderful reading performance by Clifford Norgate - most especially in his incarnation of Lola, the Mexican gold digger fiancee of the family's young and extraordinarily foolish scion. But where would country house mysteries be without one or two foolish youths?

Though Heyer didn't infuse her mysteries with the same exorbitance of wit and lighthearted humor that help make her Regencies so memorable, the books do have their own individual charm - but first and foremost, they are whodunits.

This time out, it is General Sir Arthur Billington-Smith, an odious man whom no one loves, who will be murdered in his own study in his own home over a country house weekend. The victim will, of course be surrounded by his nearest and dearest, none of whom are especially grieved by the foul deed. The set-up to the murder (by stabbing) is a series of scenes in which the General's beastly behavior is highlighted as is the anguished cringing of family and 'friends'.

Among the suspects are Billington-Smith's young, rather wimpy, long-suffering wife, Fay, and the stalwart, long-suffering man who worships her from afar, longing for a stealthy elopement to the Continent.

The wife's sister, Dinah, who has dropped in for moral support. Of the two, she is the one with gumption and pluck, two attributes Fay lacks in abundance.

The aforementioned feather-brained young scion who has shown up with a gold-digging cabaret dancer in tow planning to announce their forthcoming marriage convinced that all his father has to do is take one look at his intended and he will be charmed into submission.

An impecunious married couple who have been invited to stay primarily because the General has the hots for the wife who, in turn, hopes to cadge some money off the old geezer.

An enigmatic widow, old friend of the old geezer who knew him when and seems to be the only one whom the General will listen to.

And, of course, the vicar and his wife, both of whom are simply shocked, shocked at all the goings on.

Once the murderous deed is done, in will step the tenacious (and attractively debonair) detective, Inspector Harding, to solve the crime. But besides digging up clues and putting two and two together, the Inspector will find himself rather more involved with one of the suspects than he'd bargained for.

The whole thing is a frothy (if murder can be said to be 'frothy') confection, an old fashioned mystery which is the perfect antidote to chilly autumn nights spent (in my case) wearing flannels and cozying up with a nice cup of tea and a couple of ginger cookies.

As I mentioned, I'm enamored of the audio version of THE UNFINISHED CLUE and delighted that most of Heyer's mysteries seem to be available as audiobooks. They are just so much fun to listen to. But I'm not disparaging the printed versions at all. They too are are perfect in their own way. Either/or, you can't go wrong if cozy Golden Age country house murders are your cup of tea.

Link here for a list of all of Georgette Heyer's mysteries.

And since it's Friday, don't forget to check in at author Patricia Abbott's blog, Pattinase, to see what other forgotten or overlooked books other bloggers are talking about today.