British author Jasper Fforde is best known, I suppose, for his satirically quirky Thursday Next series of novels which take place in a modern day England that never was; an England in which airplanes haven't been invented, air travel is by dirigible, time travel exists, and the denizens of literature pop in and out of their books often leaving literary chaos in their wake.

But today is not about Thursday Next, literary detective, today is about the Nursery Crimes Division series begun by Fforde way back in 2005 with THE BIG OVER EASY. Unfortunately, this series is still only two books along and here we are in 2015. After THE FOURTH BEAR was published in 2006, no further Nursery Crimes books have come along though we were promised a third - a book now forecast to be published in 2017 - but who knows? I hate to be toyed with. Especially when the writing and story-telling are this good. But patience is a virtue (or so they say) and so I must be patient.

In the meantime, it's true, we've had the very satisfactory SHADES OF GREY (No, not that shades of grey) and its sequel also due out soon. So I mustn't complain - much. The Grey book is set in yet another bizarre though oddly familiar world, but this time out, the color spectrum is in short supply. Go read it if you want to know more. Unlike the other 'shades of grey', this time, bring your thinking cap.

At any rate, this review of THE FOURTH BEAR was first posted by me in 2011 and since I am currently re-reading the book, I've decided to bring the post forward and re-work it. This is too good a book to be forgotten, overlooked or lost in the shuffle.

How high (or low) is your tolerance for nonsense? I don't mean run-of-the-mill nonsense - I'm talking intelligent nonsense - absurdity, if you will - the kind promulgated by...oh, let's say, Jasper Forde. I don't know about you, but I seem to be able to tolerate Fforde's brand of nonsense very, very well, indeed. 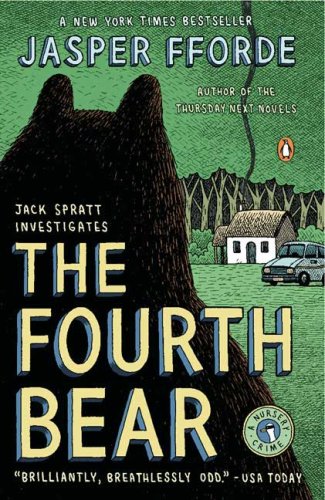 Incidentally, I love this artwork by Bill Mudron and Dylan Meconis. Hence my enlarging the cover to this gigantic 'bear' size.


THE FOURTH BEAR was Fforde's second entry in his two book (so far) Nursery Crimes series set in Reading, England in a Berkshire of his own devising. First book: THE BIG OVER EASY had to do with the death of Humpty-Dumpty who turned out not to have been a very nice egg. The likable detective in charge then, Jack Spratt, is back in THE FOURTH BEAR, where once again, due to an unfortunate incident involving a wolf, a girl in a red hooded cape and a bed-ridden grandmother, Spratt is on the outs within his small department. The powers that be are insisting that he undergo psychological evaluation or be trumped out of the NCD (Nursery Crime Division).

From the chapter headings:

First (and only) bear relocation: Mr. and Mrs. Edward Bruin, 1977. With the passing of the 1962 Animal (anthropomorphic) Equality Bill, all talking animals won the right not to be exploited or hunted and instead live in the designated safe haven of Berkshire, England. Bears were fully expected to take up residence in small cottages in the middle of the woods and eat porridge in a state of blissful quasi-human solitude, but they didn't. Most bears instead preferred to remain urbane city dwellers and shunned the notion of foraging in the countryside. Ursine elders deplore the situation but secretly admit that Reading's proliferating coffee shops, theaters and shopping opportunities are not without their attractions.The Bumper Book of Berkshire Records, 2004 edition

While Spratt resists the evaluation,  the seven foot tall Gingerbread man - psychopath, sadist and convicted murderer - escapes from the loony-bin and is roaming the streets of Reading causing havoc. But since Spratt's career is on a downturn, he is not placed in charge of the investigation even though it was thanks to him that the vile ginger cookie was captured the first time around. Rather, Spratt and his associates, fellow detectives Mary Mary and Ashley the luminous (and squishy) blue Alien, get handed the Missing Persons case of golden-haired Goldy Hatchett, star reporter for The Mole newspaper. When 'missing' turns to murder, as it usually does in mystery books, we learn that the last three witnesses to have seen Goldy alive were, you guessed it, three bears.

"Have a seat, Inspector. Tea?"

"Honey sandwich? It's all quota - no substance abuse in this house."

Ed licked his lips and shouted across to his wife. "Two teas, pet - and a honey sandwich for our guest." He winked broadly at Jack and smiled slyly.

"So when did you last see her?" asked Jack.

"It must have been Friday morning - "

"Saturday," said Mrs. Bruin from the other side of the room. Ed looked around. "I think it was Friday, actually, dear."

"Saturday," she growled."We had to go to the vet about your worms."

There was a ghastly pause. Ed looked at Jack with an expression of acute embarrassment etched upon his features. He smiled sheepishly....."What were we talking about?"

"Oh, yes. It was last Saturday. My good lady wife had made some porridge for breakfast - again, strictly quota - and we all went for a walk in the forest while it cooled."

"Is that normal procedure?"

"Yes, indeed; it's completely true what they say about bears and forests. Our morning constitutional, as it were. The forest speaks, you know, Inspector. Every morning it has changed in some small way. By the way the trees sway and the birds sing and the leaves - "

"That's very interesting, Mr. Bruin," interrupted Jack, "but what about the porridge?"

"Oh, well, we came home to find that my son's porridge had been eaten. He was most upset about it."

Ed held up a claw."Wait a minute. Then we noticed that my son's chair had been sat on and broken."

"We went upstairs and found that woman asleep in my son's bed!" The bear stared at Jack as though he should be as outraged as Ed was.

"Isn't that enough?" asked Ed angrily. "You would have thought that finally, after two thousand years of being hunted, kept in grotty zoos, made to ride motorcycles and dance to some forgettable tune played by a repulsive and usually toothless Eastern European, we members of the Ursidae family have won the right to be left alone."

"She broke a chair, but surely that's not the end of the world?"

"It's the thin end of the wedge," he replied indignantly. "How would you like it if a bear wandered into your house when you were out, ate your breakfast, destroyed your property and then had the barefaced cheek to fall asleep - naked - in your bed?"

Eventually, both investigations will intertwine as we knew they must, bodies start dropping like flies (including a woman who was wallpapered to her wall), giant cucumbers start exploding, and Jack and Mary Mary must save the day though they will, of course, not be thanked for it. Nobody likes to be shown up, less of all, Jack's ego-maniacal and mostly inept superiors.

Call this a wickedly funny police procedural satire or just a very strange book, whatever you will, just don't miss it.

World's oddest theme park: Contenders abound in this field, and several deserve mention. ElephantLand in impoverished East Splotvia is odd in that it has no elephants, nor a clear idea of what one is. GummoWorld in upstate New York is devoted to the Marx brother who had the distinction of never appearing in a movie, and Nevada's ParkThemeLandWorld is a theme park dedicated to other theme parks, but has no attraction of its own. SommeWorld in the UK invites its visitors to taste the marrow-chilling fear of being an infantryman in the Great War, and, by contrast, ZenWorld in Thailand is nothing but a very large empty space in which to relax. Our favorite, however, is La Haye's DescarteLand, which merely furnishes ticket holders with a paper bag to put over their heads and a note reading, "If you think it, it shall be so." The Bumper Book of Berkshire Records, 2004 edition.

Author Patricia Abbott is away at Bouchercon this week and so meme hosting duties will be handled by Todd Mason at his blog,  Sweet Freedom. Don't forget to check in to see what other forgotten or overlooked books other bloggers will be talking about today.