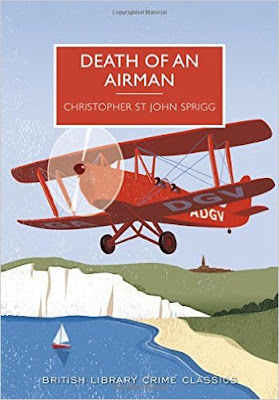 A British Library Crime Classic - this nicely packaged book (with a forward by Martin Edwards) is one of several Golden Age mysteries brought back for our delight by Poisoned Pen Press. It's a wonderful thing to make available little known and/or scarce Golden Agers for those of us who love this sort of book and yearn for more and MORE and still many more. These are the sorts of books we love to read and reread alongside Christie and Sayers and Marsh and Tey and the rest of 'em. I'm very fond of comfortable murders solved by people with manners. Just because someone is lying dead at your feet doesn't mean you can't say please and thank you.

Christopher St. John Sprigg wrote several mysteries (as well as other books under a pseudonym) and died fighting in the Spanish Civil War before his 30th birthday. Afterwards his work faded into obscurity, but now, thanks to Poisoned Pen Press, we can become acquainted with a book that Dorothy Sayers herself (then critic at the Sunday Times), enjoyed and recommended.

DEATH OF AN AIRMAN is a sprightly and intriguing mystery set mostly at a British airfield where professional and amateur pilots go about their daily flying routines and where shortly two murders will throw a monkey-wrench into the proceedings. Baston Aero Club is a flying school run by the unfortunately named Sally Sackbut (yes, I know, but that's her name), it is where we first meet the Bishop, a rather nice provincial chap who has a habit of noticing things and will, before long, be instrumental (in a kind of peripheral way) in helping Scotland Yard solve two brutal murders.

'A young woman with a reddish face and horn-rimmed glasses appeared suddenly out of a door marked "Manager, Baston Aero Club."

"Well, young man, what do you want?" she asked sharply.

The middle-aged man in grey flannels who was standing in the club hall looked around to see who was being spoken to, and then perceptibly started when he realized that it was he who was being addressed.

"Are you the manager of the Baston Aero Club?" he asked.

"Manager and secretary. In fact, I run the place," she answered.

"I see." The speaker, though obviously not shy, had not quite recovered from the surprise of being addressed as "young man" by a woman some years his junior.

"The fact is, I want to learn to fly. That is," he added diffidently, "if I'm not too old for that sort of thing." His diffidence contrasted with a certain deep richness of voice - the kind of voice which inevitably suggests public speaking.

The young woman beamed. "Don't you worry! We'll teach you if it kills us - or you." She rummaged over a table in the hall which was littered with papers and picked out a form.

"We'd better make you a member before you lose your nerve. Are you a British subject? We're not particular, but if you aren't British we don't get a subsidy for teaching you, so we charge you more."

"I am an Australian."

The red-faced young woman peered at him anxiously from behind her glasses. "I hope you don't get fighting drunk? Our last Australian smashed every glass in the place the day he went solo."

The stranger cleared his throat deprecatingly. "I think it unlikely that I should do the same. I am the Bishop of Cootamundra."

The plucky Doctor Marriott, or as he much prefers, just plain 'Bishop', will soon be up in the air in one of the school's planes doing his very best to follow the rather odd sounding (at least to me) instructions issued by his instructors, an enigmatic scar-faced flying ace named Furnace as well as the aforementioned Sally.

When Furnace, flying solo, crashes and is killed in full view of those on the ground the unfortunate event is first thought to be a suicide. But when something about the body itself bothers the Bishop, he decides to ask a few questions.

What follows is a locked room sort of mystery in which the 'locked room' is actually the cockpit of a small two-seater plane and 'the how' of a murderous attack remains unexplained until the last couple of chapters.

After the perturbed local police call in Scotland Yard, there follows an exhumation where a sickening fact emerges. Slowly a far reaching criminal conspiracy is uncovered which leads to a horrible second murder and a rip-roaring ending which, inadvertently involves the Bishop in a high flying death defying trip. I don't, normally, like books where drugs are involved, even tangentially, but when written this well in a style that I admire, I'll put up with it. I love when a whole new world is opened up to me by a writer, especially a writer I've never read before.

But we mustn't forget that this is a book set in and of its time.

It is the kind of thing where, in the end, the bad guys make full confessions and explain everything that needs explaining - nobody does that sort of thing much anymore, but back in the day, bad guys spilled their guts for the edification of the reading audience.

This contrivance is the only weakness (and really, it's not annoying just overly familiar in hindsight) in an otherwise very entertaining book which brings to light, if a shade dramatically I suppose, a bit of the comings and goings of a flying industry still in its infancy. A burgeoning industry in which both male and female pilots were dashing figures whose adventures were followed by the media. A by-gone age where local air shows and races were exciting occurrences and pilots were treated as celebrities.

P.S. There's also a nicely done and totally unexpected development in the very end which left me smiling.

Luckily and surprisingly, my library had a copy of this book, but if your library is not as accommodating, you can certainly find copies of DEATH OF AN AIRMAN online. I'm currently looking for used copies of the rest of the British Crime Library Classics titles.

Since it's Friday Forgotten (or Overlooked) Book day, don't forget to check in at author Patricia Abbott's website, Pattinase, to see what other forgotten or overlooked books other bloggers are talking about today.