Book Review: THE QUESTION OF THE UNFAMILIAR HUSBAND by E.J. Copperman aka Jeff Cohen 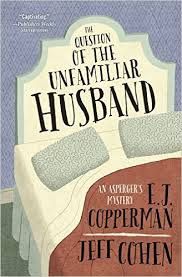 I'm a big fan of Jeff Cohen's work all the way back to 2002 and his hilarious Aaron Tucker mysteries set in New Jersey. I love to laugh while reading and Jeff Cohen makes me laugh.

An aside: Lately I've been reading up a storm and several of the books will be reviewed as the days go by primarily because I've loved almost all of them and I want to share my enthusiasm while it lasts. Last few weeks, I've needed cheering up and happily, most of the books that have come my way have done their bit to enliven my mood one way or another.

Back to the topic:

THE QUESTION OF THE UNFAMILIAR HUSBAND is another humorous mystery - second in a captivating new series by Jeff Cohen aka E.J. Copperman - featuring a likable hero who happens to have Asperger's Syndrome and thus, the books' sub-title: 'An Asperger's Mystery'. (In reality, Jeff has a son with Asperger's and is the author of  'The Asperger Parent: How to Raise a Child with Asperger's and Maintain Your Sense of Humor'.)

Samuel Hoenig's business, Questions Answered, operates out of an ex-pizza joint in a NJ strip mall where Samuel (never call him Sam) answers questions put to him by clients who don't have the time or the energy or the know-how to find things out themselves. Yeah, it sounds like a private detective thing, but it sort of, kind of, isn't. Samuel is only interested in the answer to a specific question - if along the way he happens to unmask a killer or two, well that's almost beside the point. Samuel is not a savant, but he does have a way with details that might elude others. He is never remotely apologetic about his Asperger's, even when his linear thinking hampers communication but is self-aware enough to know that his lack of empathy might occasionally be a social problem.

That's where Janet Washburn comes into the picture. She is the young woman Samuel had earlier hired (in the first book) as an associate, who has since declined further employment with Questions Answered. Why? Well, because her husband is not happy about the more dangerous aspects of working for Samuel - in the first book there was that nasty incident of the missing head.

Too bad. Since the two worked fine as a team and Samuel likes to turn to Janet for insight into the often mysterious workings of things some of us might take for granted, like marriage and relationships and the proper meaning of chit-chat and metaphor.

However, to keep hubby happy, Janet has refused to return to her job.

When Samuel's newest client comes in one day and poses the question, "Who is the man in my bed who calls himself my husband?"  Samuel realizes he will need Janet's help again.

The mysteries of marriage - Samuel hasn't a clue. Again he tries to get Janet to join the Questions Answered team which consists of Samuel and occasionally, Samuel's mom. Again she refuses, but we sense she's weakening.

Especially when the latest 'question' put to Samuel takes a sudden ominous turn: the client's husband (?) is found dead on the floor of the Questions Answered office/ex-pizza joint and naturally, the police are suspicious.

Another unconventional mystery (with a touch of the absurd - a Jeff Cohen specialty) featuring characters you can't help but like and want to root for and that's half the battle right there. I hope there will be many more installments in this series and oh by the way, the books themselves are nicely done (with wonderful covers) in trade paperback style which is my preferred paperback size for reading comfortably in bed.