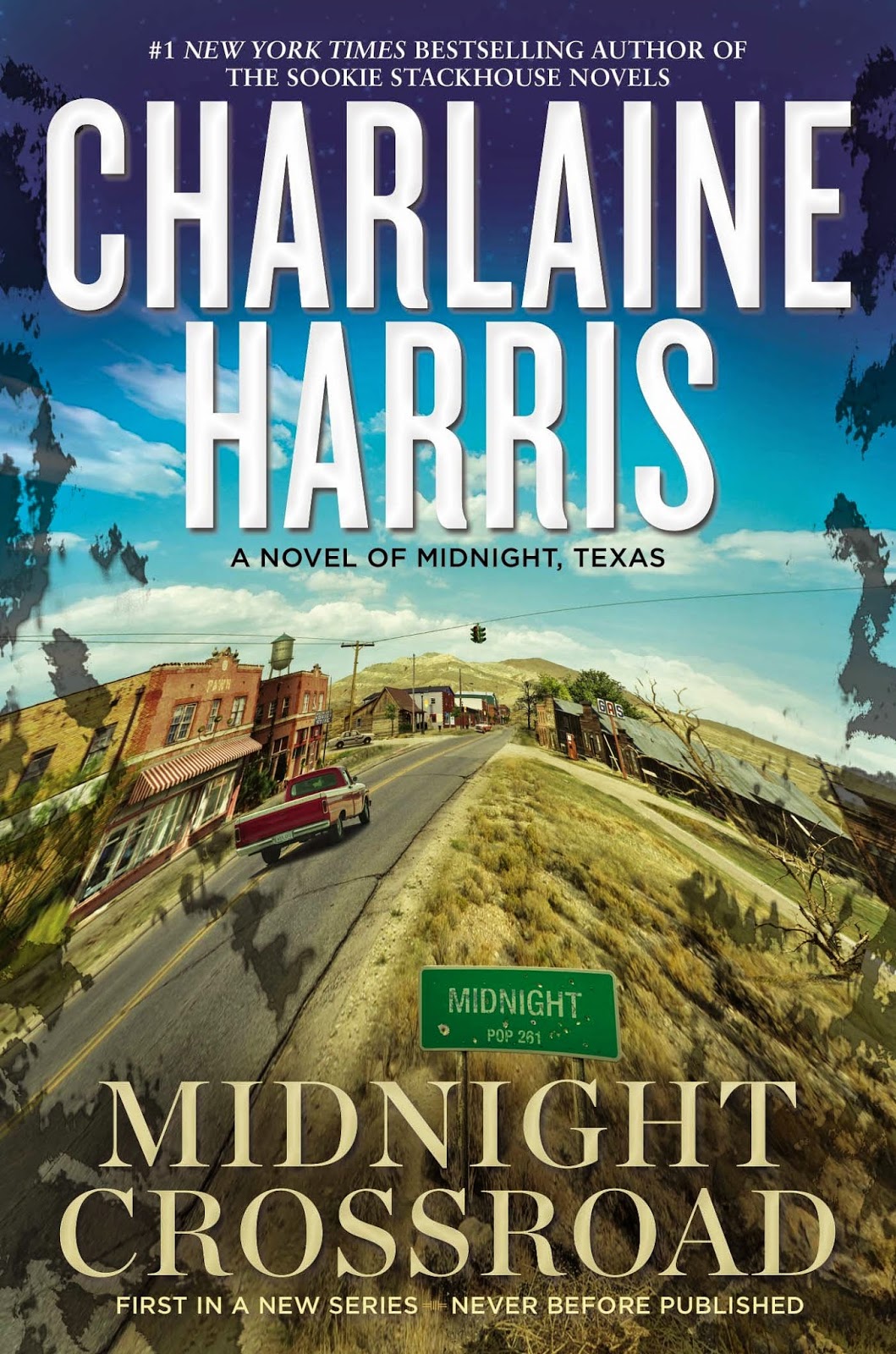 Haven't read a 'forgotten or overlooked' book lately and have nothing in my head (vintage reading-wise) I wanted to talk about, hence my 'unforgotten' book post. Hopefully that's okay with Patti who conducts the 'FFB Friday' meme at her blog, Pattinase. (Don't forget to check the list and links.)

I don't, normally, read this kind of book so MIDNIGHT CROSSROAD was another of those light, pleasant reading surprises that add spark to the doldrums of summer reading.

Author Charlaine Harris' Stookie Stackhouse books have been turned into a very successful HBO television enterprise so I need hardly introduce her work to you. The series is called TRUE BLOOD and I've never seen it nor do I plan to. I'm not much of a fan of the undead. Haven't read the books either - not my thing. But I know I'm in the very tiniest minority.

Though I am familiar with the oh-so-charming and patient Harris (and am thrilled for her success) because I once ran into her at a conference and spent a few delightful moments embarrassing myself by gushing over a couple of her earlier series, one featuring librarian/crime solver Aurora Teagarden and the other featuring the troubled but kick-ass heroine Lily Bard. Then I ruined the whole thing by attributing a book to Harris that she hadn't written. Embarrassing! But she was SO sweet about it.

The Lily Bard books, in particular, need to be turned into a series, but I fear there's not a vampire or werewolf to be found within - just terrific mysteries with a noir vibe and a compelling, if damaged, heroine. The setting, Shakespeare, Arkansas is also a plus. If you're not familiar with those books then make yourselves familiar asap beginning with SHAKESPEARE'S LANDLORD. You will feel for Lily and you will love her and then you will wish there were more than five books in the series.

Hey, I just realized I could have gone with Lily Bard for today's meme, since I've never actually met or talked to anyone who's read these books. Even if they remain one of the best female-centered series around.

Back to MIDNIGHT CROSSROADS which does, I've read, feature a character left over from the Sookie Stackhouse books. But I thought I'd take a look anyway - it's been awhile since I read any Charlaine Harris and MC has an intriguing premise (...a new mystery-romance-paranormal mash-up...Booklist), first in a planned trilogy set in an isolated small town in West Texas. Judging by this one, I'll be reading the next two soon as they become available.

Manfred Bernardo is the new guy in town. He has secrets. (Who doesn't?)

"...then Manfred realizes that all morning, throughout the camaraderie of unloading the van, neither of his companions asked the obvious questions. Why are you moving to such a godforsaken place? What brings you here? What do you do? Where did you live before?

And Manfred Bernardo realizes he's moved to the right place. In fact, it's just like he belongs here."

I like stories of new beginning in new places most especially if there's a promise of odd doings. Here we get the usual barrage of eccentric misfits - the town is a virtual island of lost and quirky souls - but all are embroidered with Harris' unique touch.

Bernardo reads minds, sort of, though he often doesn't. His neighbor Fiji, is a witch - sort of - with a cat as her familiar - you know how that goes. There's a weird sort of minister of some unspecified religion - he hardly, if ever, speaks at all, so there's that to deal with. Then there's a handsome guy named Bobo who runs the pawn shop - Fiji has her eye on him. Bobo rents a room in the basement to a vampire named Lemuel. Just the one. Not too bad. Just one. He's not introduced until part of the way in so we get used to the more likable characters first.

Lemuel is a very sinister, pasty-faced individual who feeds on blood and energy and comes out at night with his companion, the enigmatic Olivia. Though she's not a vampire (far as I can make out), both are characters to be very wary of in Midnight, Texas. Even if they are neighbors.

Of course there's murder and mayhem to follow and a treasure to be discovered. But in truth, here's all you have to know about this book to know if you'll like it or not:

Remember that cat I mentioned earlier? Fiji's familiar? Well, he talks. Yeah, he does. Though we don't find out for awhile. He is hilarious and worth the price of the book if you're inclined to buy. I might even call him: THE. BEST. CAT. CHARACTER. EVER. And I do.

If you can't accept this little bit of oddness, then don't read the book. Really. It's not for you.

But here's my view: if you accept vampires and their modus vivendi, then why not a talking cat? Especially a talking cat with a serious attitude problem.

I laughed so loud, I was afraid my neighbors might hear.