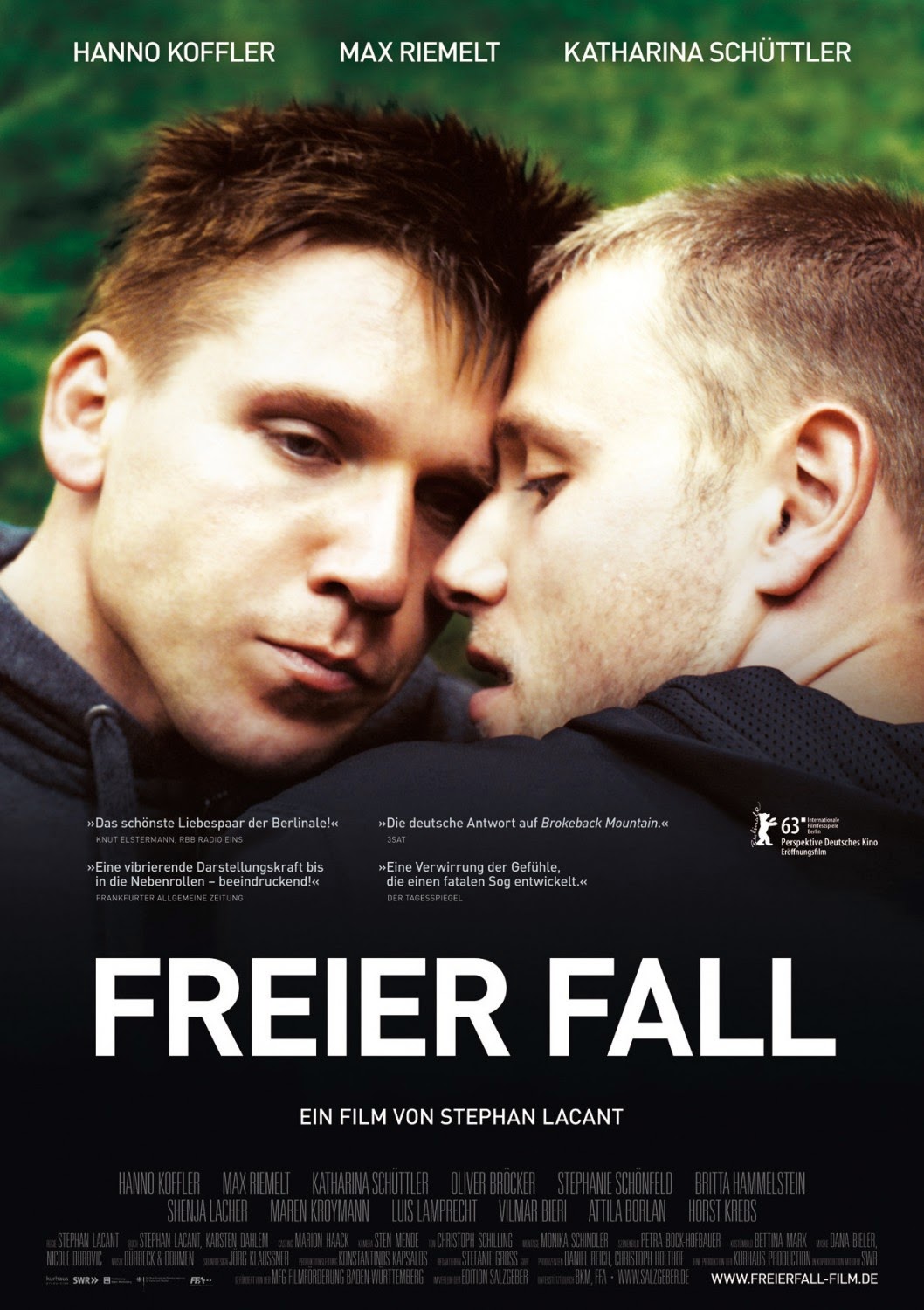 FREE FALL (2013) is a film directed by Stephen Lacant, screenplay by Stephen Lacant and Karsten Dahlem, starring two remarkable German actors, Hanno Koffler and Max Riemelt. I had heard that this was on par with BROKEBACK MOUNTAIN which remains one of my favorite films of all time even if the damn thing broke my heart.

Was this as good as BBM? Almost. Yes, I dare say it, almost.

The raw honesty of the film was not totally unexpected but I was surprised by how incredibly good the acting is. Hanno Koffler as Marc Borgmann got a well-deserved German Academy Award Best Actor nomination and probably should have gotten one here as well. He's THAT good. Max Riemelt as Kay (rhymes with 'eye') Engel is really just as wonderful though the film unveils from Marc's point of view so his character carries most of the weight. 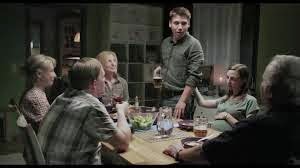 Marc Borgmann is a rookie cop with a girlfriend and a baby on the way. They've moved close to relatives to make things easier on the new mother though in truth what it does is overwhelm Marc. I'm not sure how the German police works, but it seems that they must spend part of the week away in barracks training, I guess like our police academies. This part isn't very clear but since it's not overly important to the story - except that it throws the two men together in a mostly male environment - I won't worry about it. 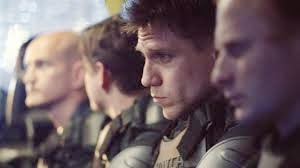 The work setting has an institutionalized military look and feel to it as the cops train in riot control, hand to hand combat and other police oriented disciplines. There are barking instructors, rigid rules to follow and lines not to be crossed. Marc is working hard to pass his exams and he doesn't give name to his uneasiness because he loves his wife and knows he has a lot to be thankful for. This unease is slowly drawn out and results in Marc being culled from the group in training by Kay Engel, a younger, more easy going rebel-prone type who finds Marc's play-by-the-rules behavior and occasional haplessness, intriguing.

Not that Kay is a predator, he's just a lonely man on the make, not that unusual. Kay's hard veneer covers a vulnerability, flashes of which we get here and there and are all the more beautifully expressed by their subtlety. Max Riemelt is wonderful at expressing by not expressing. He is the perfect foil for his co-star. Then of course, there's that fleeting hint of mischief in his eyes.

The two men begin training, running together. Marc is intrigued by Kay's ease of manner and indifference to the rules. They form an unlikely acquaintance bordering on friendship until, during one of their runs, Kay makes a pass at Marc. Marc's immediate negative reaction causes Kay to dismiss it as a joke. But once Kay resumes their run, Marc stays behind and the camera lingers on his almost expressionless face. Nothing overt, nothing other than the fact that it's obvious Marc has had a reaction he wasn't expecting. The troubled look in his eyes speak volumes.

From that moment, Marc is wary of Kay and tries to steer clear. But as time passes this becomes more and more difficult for him. Especially since Kay senses that Marc - much against his better judgement - is attracted. 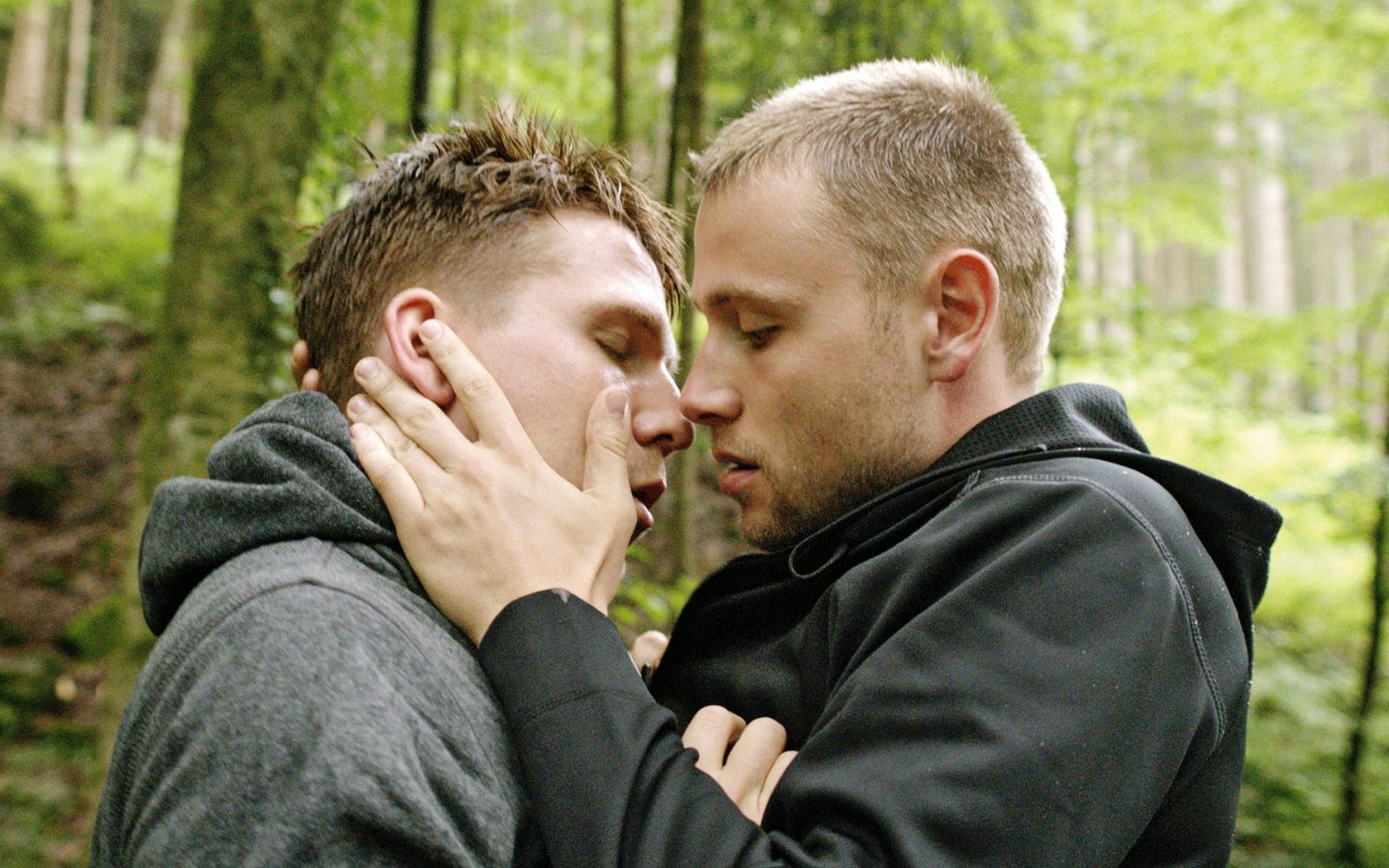 Over time, the two men are drawn to each other and fall uneasily into a passionate affair. But as in BROKEBACK MOUNTAIN, it is more than an affair. That's the problem, really. In this sort of film love means loss and devastation. 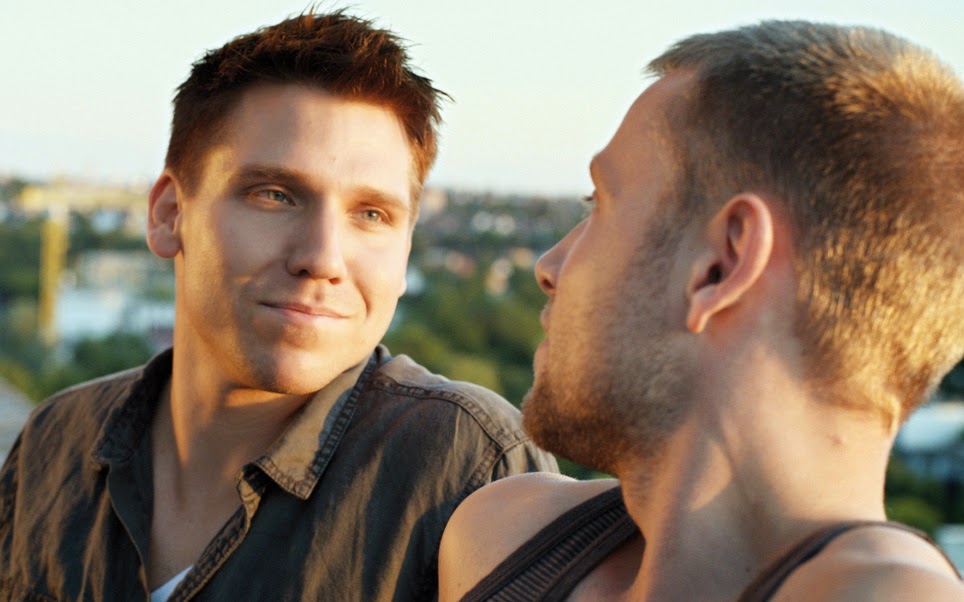 There is also some violence but not over the top and the loss is not unexpected. When will there be a dramatic film featuring two men who fall in love and live happily ever after? Well, obviously not when there's a broken marriage in the middle of the mix. As much as a guilty Marc tries to find a solution, tries to do what's right in an untenable situation, he just makes things worse. We then get an ambiguous ending in which we are given to believe that Marc is a stronger and better person.

Otherwise this is one of the more moving films I've seen in a while. It's all in the acting of the two leads which is beautifully sincere and affecting and yes, sexy. The more because these are not two pretty boys, they are, instead two men who look as if they might really be human beings and cops. 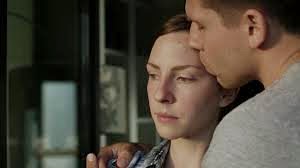 Watching Marc's relationship with the mother of his child as it crumbles, you feel achingly sad for the confused and heartbroken Bettina (Katharina Schuttler) who must deal with a newborn and a man who is suddenly a stranger.

Yes, there are a couple of sex scenes - one very intensely passionate, but considering that many films featuring heterosexual relationships rarely stray far from the bedroom, there's nothing here that will stun you and cause you to go into abject shock. Hanno Koffler's tenderness in the midst of desire is actually rather beautiful to behold. As is Max Riemelt's bemusement in the face of overwhelming passion. You do believe these two men are desperately in love.

By the way, there's also a shower room scene in which frontal nudity is casually displayed. The men shower in groups. Done this matter-of-factly you don't recoil with horror if that was your inclination. I was not the slightest bit uncomfortable and I'm an old lady with old lady sensibilities. What did make me uncomfortable was the name-calling and homophobia of some of Marc's co-workers. Nudity I can deal with - it's hate that gives me a hard time.

Not an easy film, but definitely one of the most affecting and memorable.

Don't forget to check in at Todd's blog, Sweet Freedom to see what other Forgotten or Overlooked Films, Television or Other Audio/Visuals, other bloggers are talking about today. We're a lively bunch.