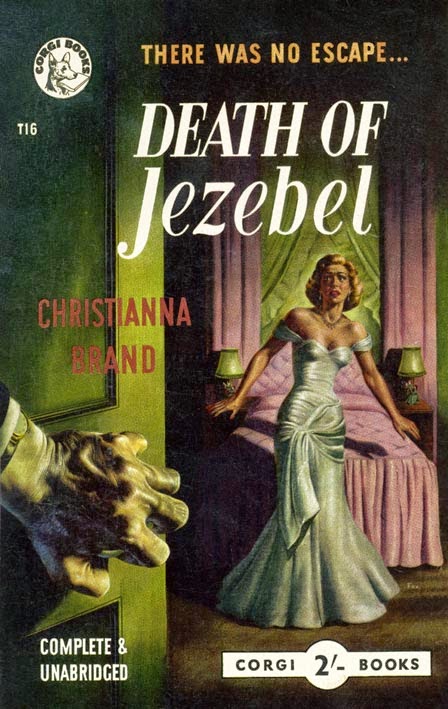 Since John over at Pretty Sinister Books raves about this particular Brand book and I'd never read it, and since a hard copy of DEATH OF JEZEBEL is difficult to come by without shelling out big bucks, I went ahead and ordered it from audio.com (I joined a while back) and boy am I glad I did.

Yes John, you were absolutely right. This is an ultra-FABULOUS book. I'm not sure it's the best of Brand but close enough. I think I still like SUDDENLY AT HIS RESIDENCE just a teensy bit more. But why quibble. Both books are extraordinarily good.

Christianna Brand is the Queen of Multiple Endings, but in DEATH OF A JEZEBEL she reaches for the stratosphere of multiple endings. Wow. But rather than detract from the thing (or add their own makeshift tedium) as some of these tricky endings do, in Brand's book they just add more and more dazzle to the whodunit atmosphere. Just when you think: AHA! Another clever ending presents itself. Surprise! To me it was obvious that Brand was having a bit of fun with the reader. But when you're a genius you can get away with this sort of thing.

An English pageant, knights in armor, horses, a princess in a tower, a cozy cast of intriguing characters, a locked room murder in full view of Inspector Cockrill (in London for a conference but missing is regular stomping grounds, Kent, where everyone knows who he is and treats him accordingly) and a large audience. The perfect crime? We shall soon find out that where Inspector Cockrill is concerned, no crime is too bizarre or too convoluted to solve.

Isabel Drew (the erstwhile 'princess in the tower' waiting up there to make her pageant entrance on cue) is the 'jezebel' in the title. Bitter, beautiful and bitchy, Isabel thinks nothing of dabbling in a spot of opportunistic blackmail. A clever woman who's been around the block a few times, she is no longer in the first flower of youth and knows her days and nights of opportunity are numbered. A careless sort, Isabel is utterly self-absorbed and oblivious to the feelings of others.

Seven years before, Drew and a male friend participated in a sordid event which led to the suicide of Johnny Wise, a young and impressionable British flyer visiting London from his home base of Malaysia - or as Isabel insists on referring to the place, 'the malaise'. Also involved in the sad affair was the equally young and impressionable Perpetua Kirk (known as Pepi) who was Johnny's fiancee.

Now with World War II finally over, it seems that the past has reached out, determined to seek vengeance for the terrible death of a fair-haired boy whom everyone loved.

When threatening notes are discovered, Pepi asks her old friend Inspector Cockrill to take a hand. She invites him to attend a rather preposterous pageant planned by some of her acquaintances. "Ah, the British and their pageants." mutters Cockrill. But he likes Pepi and wishes she'd get over the events which blighted her life seven years before.

What follows is not only a mystifying locked room murder staged in front of a large crowd of spectators - none of whom sees anything worth noting - but a nasty be-heading as well. Ah, the British and their juicy Golden Age murders.

I'm a sucker for this sort of thing.

My unabridged audio version was beautifully narrated by Derek Perkins.

While Patti Abbott is away from her desk, Evan Lewis will be collecting links at his blog Davy Crockett's Almanack. Don't forget to take a look to see what other forgotten or overlooked books other bloggers are talking about today. 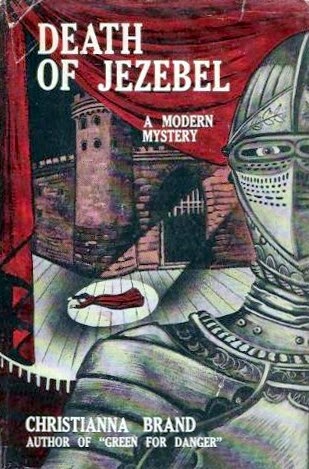 source
Posted by Yvette at 1:30 AM