Friday Forgotten (or Overlooked) Books: THE CASE OF THE SEVEN WHISTLERS (1944) and DEATH IN THE NIGHT WATCHES (1945) by George Bellairs 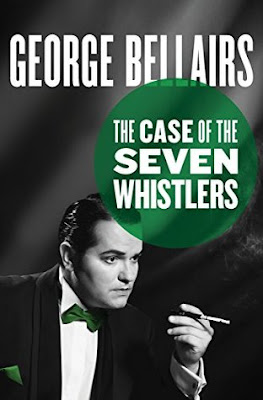 Not one but two books by George Bellairs, both lively and entertaining British Golden Age mysteries. Both currently available (alongside a whole host of other Bellairs books) on Kindle. Bellairs was the inducement for me to join Kindle Unlimited (first month free then ten bucks a month) because it's a cheap way to get to read not only Bellairs, but Gladys Mitchell and a bunch of  older mystery writers who may not be readily available. I know a lot of people say it's not worth ten bucks, but yeah, it kind of is. I mean, if I read only three books a month it's worth it. But I read quickly so I expect I'll be over-indulging in my drug of choice: reading - more than getting my money's worth. And I can always quit at any time.

On the whole, there are more pluses than minuses when it comes to George Bellairs. I've only just recently begun reading his stuff and so far so pretty good. Though his detective, Inspector (later Superintendent) Littlejohn is not exactly Mr. Personality and he never really comes to life at least over the few books I've read so far, but in truth, the same can be said for several of the Golden Age detectives, so no big deal. Let's move on.

THE CASE OF THE SEVEN WHISTLERS

I'm inclined to pick up books with titles that begin with 'The Case of The....' or 'The Mystery of ...' or 'The Adventure of...' Can't help myself. So I picked this one - so to speak - when it showed up on my Kindle recommendations. I'd read a couple of Bellairs' books previously so I kind of knew he was a good writer of puzzlers. So no big surprise that I enjoyed THE CASE OF THE SEVEN WHISTLERS.

The Seven Whistlers is the name of a small antiques establishment catering mostly to tourists in a picturesque English seaside town. The shop is run by a very odd duo: Messrs. Grossman and Small aided and abetted by a bleached blond by the name of Mrs. Doakes who is, apparently, no better than she should be. But something very fishy is going on at The Seven Whistlers.

What I had forgotten is that George Bellairs has a wicked sense of humor and it shows to advantage in this tale of a body found in an antique trunk (I call it a trunk even if it technically is more of a large decorative wooden box.) The intriguing thing is this particular body turns out to be that of Mr. Grossman - proprietor (alongside his slovenly partner, a large man named Small) of The Seven Whistlers. Mr. Grossman sold the aforementioned antique box to a Miss Selina Adlestrop of Hartsbury on the last day of her holiday in Fetling-on-Sea. The box to be shipped by train.

What follows is one of the more hilarious body discoveries in the history of crime fiction. I can say no more - except this alone is worth the price of the book.

The solution is fairly obvious around two thirds in after the second death, but as I mentioned, that didn't dampen my enthusiasm. 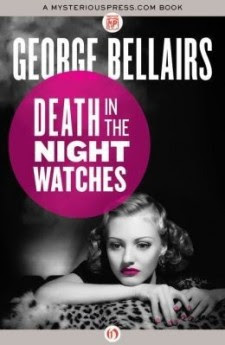 DEATH IN THE NIGHT WATCHES

England during WWII. Blackout regulations and other strict measures.This is the second Bellairs book I recently flew through - attracted by the setting. Bellairs is excellent at creating ambience - something I especially like in these sorts of long ago mysteries. Come to think of it, I like good ambience in modern day stuff too - though easier said than done.

You know the harm that a pesky will can cause - especially a pesky will in a Golden Age mystery. And you know how old moneyed codgers in these mysteries are always making imprudent marriages much to the horror of their own grown-up children - adults with expectations. (Nothing more dangerous than adults with monetary expectations.) This is the case when the will of William Worth is read, a will which practically begs for the murder of his widow - a woman younger than Worth's own children. Ah, families.

The Worths are an especially cringe-worthy lot. Suspicion, sniffy snobbery and resentment fester and, as expected, it seems as if someone is, indeed, trying to get rid of young Mrs. Worth.

It comes as a surprise then when it's the eldest son,  Henry Worth, the unpopular managing director of Worth's Engineering Works, who is murdered instead while on firewatch (there is a war on after all) at the factory one evening. Who could have done it? One of the surly laborers? Or looking closer to home - there is that pesky will. But why Henry? It's the stepmom after all who controls the dough.

There are several suspects for Detective Inspector Littlejohn to investigate:  Henry's artsy-fartsy brother, a sister who has married an obsequious French Count, the young stepmother who, conveniently, had been carrying on an affair with Henry under the nose of the contriving elderly hubby (who is already dead and buried as the novel opens). Or could it have been the stepmom's soldier brother who shows up rather surreptitiously one evening? Or how about the nanny, an elderly family retainer with suspicions, who has her own room upstairs at the manor? Or is it possible that the killer is someone who objected to Henry's many romantic dalliances? An outraged hubby or daddy?

Not the greatest mystery ever written, but I enjoyed it precisely because I was in a lazy mood and not looking for anything to wrack my sun frazzled brains in what has to be one of the hottest summers I've ever had the misfortune to live through.

I'm currently reading DEATH SENDS FOR THE DOCTOR, another Bellairs book in which ambience (this time a creepy sort of English town square where everybody overlooks everybody else and everyone knows everyone's business and there's a skeleton in a well which needs explaining) is even more important and liking it very much. I guess I'm on a Bellairs bender for now.

Hey, it's Friday once again, so don't forget to check in at author Patricia Abbott's blog, Pattinase, to see what other forgotten or overlooked books other bloggers are talking about today.