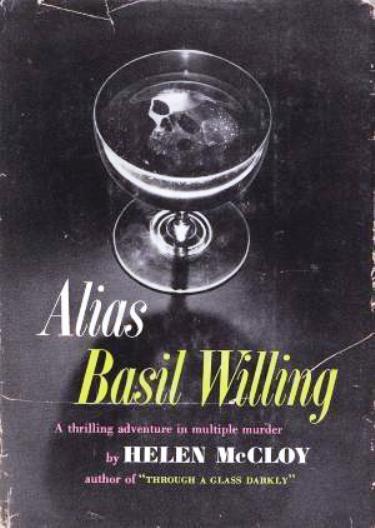 Okay I admit it, I read this book because of the title. Basil Willing is one of my very favorite character names in all of literature. PLUS a couple of other bloggers have written about the book and made it sound like something I might like.

However, since Willing, an American psychiatrist working for the N.Y. District Attorney, is not nearly as charming or intriguing as Philip MacDonald's English crime solving gentleman of means, Anthony Gethryn, whom he vaguely reminds me of and the plot of this particular book peters out near the end, I can't say that ALIAS BASIL WILLING quite lived up to my expectations. As you'll see, it's a book I'm 'iffy' about.

Helen McCloy was a prolific American writer who wrote not only thirteen Basil Willing full length mysteries and one volume of short stories, but also an assortment of standalone suspense novels. She was a big proponent of the psychoanalytical view of human affairs and her tales reflect it. I've yet to read MR. SPLITFOOT and THROUGH A GLASS, DARKLY, which are considered her best Basil Willing books, so I haven't really contrived a final opinion of her work. But so far, from what I've read, I would rate McCloy in the middling-to-good class of Golden Age-to-mid-20th century school of writers. But that may change as I move on.

If memory serves me, I've read one other Basil Willing book, CUE FOR MURDER, so I kind of knew what to expect and truth be told, this was the better of the two, though again, that soupcon of tense excitement so effortlessly created by McDonald in his tomes, is altogether missing from McCloy's efforts. I've also read one of her standalones, DO NOT DISTURB, which I disliked primarily because it SHOULD have been a terrific book and wasn't, bogged down as it was with character speeches about human rights and whatnot, not to mention, an improbable set-up (which could have been overcome, but wasn't). I hate when that happens.

ALIAS BASIL WILLING was okay, maybe just a little better than okay, but the ending left me feeling that I'd been bamboozled and not in a good way. (Needless to say, I never mind being bamboozled in a good way.)

Oh the book starts off brilliantly, no doubt.

A man overhears another man identify himself as himself. What? Oh, I mean that one night Basil Willing, in a coincidence of coincidences, overhears a man identify himself as Basil Willing and the chase is on. Intriguing - right? Real Basil follows fake Basil and winds up at a bizarre party thrown by a Dr. Zimmer, in yet another coincidence, a well known psychiatrist. Zimmer is the sort who regularly likes to observe his patients in a casual party atmosphere to judge how their neuroses work in a social milieu. The parties are a weekly thing.

Real Willing finds this odd. He isn't keen on this sort of psychoanalytical approach, but to each his own. After all, Zimmer has a good reputation and non-Freudians are known to veer off in different directions. But still, there's something untoward about the whole night, especially when a short while later, two guests are murdered.

While at the party, the real Willing is spotted by one of the guests but she keeps quiet. Fake Willing is the guest of a blind woman, Katherine Saw, who happens also to be a patient or is at the party because her nephew brought her. I can't remember which. Anyway, turns out that the blind woman hired the man to impersonate Basil Willing because she fears someone is trying to kill her.

Fake Willing turns out to be a private detective - not an especially big surprise there. Unfortunately, the man winds up dead that very night after leaving the party. His last words, a cryptic expression (aren't they always) which even when explained near the end, makes little sense.

Here's the thing about 'cryptic dying expressions' - why doesn't the victim EVER just shout out the name of his or her killer? That would make more sense then muttering some line of poetry or fanciful observation or worse - code words! - meant to confound whoever it is that must hunt down the killer. Stands to reason - right? Ah, but then where would we be?

And there is lots of poetry and quoting from obscure texts in this particular mystery. Kind of nonsensical in a way, because why would a psychiatrist know this much about poetry and English lit? Oh I know people got different educations way back then, but still it did make me roll my eyes a bit. It's not as if he were a professor or collector - but maybe he is and I missed the reference. Or maybe there's something in Willing's background that explains it - possibly in another book. And before you say: Michael Innes! Let me remind you that his detective, John Appleby, was a different kettle of fish, since he was obviously, a kind of prodigy AND his creator was a Scottish academic. Plus you do expect a brilliant English detective of the old school to spout literary quotes and whatnot - at least, I do.

Back to Basil Willing: Another death soon follows and it becomes obvious that there was something far more wrong at that strange psychiatric gathering than the bizarre atmosphere and Dr. Zimmer's strained bonhomie AND a man masquerading as a famous psychiatrist.

There are plenty of suspects amongst the party guests so as we follow Real Willing in his investigation there's no shortage of suspicious behavior and weirdness, including the likelihood of a possible mercy killing to add to the mix. Lots to consider even if none of the characters earn much of our sympathy.

The final denouement, as I mentioned, is of the kitchen sink variety and too weirdly absurd even for a genre that routinely deals with absurdities. I felt kind of cheated.

In truth, this is one of those books that insists you make your own judgement because the reviewer - yours truly - could be entirely wrong and then you'd be missing out on something good. In other words - judge for yourselves on this one. Don't know why I'm saying this except that I'm kind of persuaded that I might have overlooked something but somehow I don't care enough to do a re-reading.

Here is John's excellent review of ALIAS BASIL WILLING at Pretty Sinister Books, he goes into more detail than I do since he's the expert and I'm not.

And since it's Friday once again, don't forget to check in at author Patricia Abbott's blog, Pattinase, to see what other forgotten or overlooked books other bloggers are talking about today.