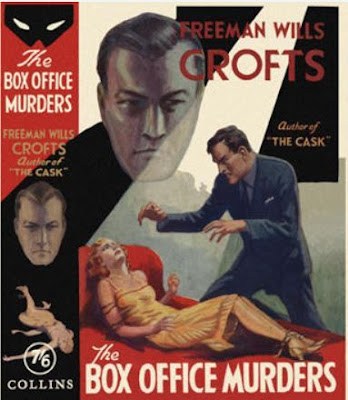 Yet another English police procedural by Freeman Wills Crofts, this one highlighted by three murders and a brazen kidnapping Just the kind of thing I was in the mood for. But then, I am very fond of so-called police procedural mysteries, especially those written by 'golden age' authors whose like we'll never see again. Thankfully, their work lives on, though Freeman Wills Crofts' books are harder to find than most. Unusual for an author who is not exactly unknown and wrote some terrific stuff. Luckily, more and more of Crofts' books are being reprinted - but not fast enough to suit me. He was a prolific author whose many books have all but disappeared. Undeservedly so.

But one day, THE BOX OFFICE MURDERS showed up on a list of Kindle recommendations quite out of the blue. Consider me very pleased. Especially since the book lived up to my expectations.

A young woman who works in a movie box office finds herself in a bind. She talks to a friend. The friend recommends she see an attorney for advice. They do. The attorney sends the young woman to Scotland Yard where, fortunately, Inspector French (Crofts' dogged sleuth) is free at that moment to hear her story.Thus he learns of the mark of the purple sickle.

That mark sounds more romantic than it is and in truth, it is about as fanciful as Freeman Wills Croft gets. But it's a nice touch.

The young woman's name is Thurza Darke and the story French hears from her is an old one, familiar to a seasoned detective. It's the one about a gullible girl being drawn into the clutches of people who have promised her a surefire way to make some side money - a vague sort of gambling scheme which can't fail. Right. Silly sort of ruse, but Miss Darke falls for it. Then of course she winds up owing the wrong people money and being menaced by a particularly evil chap who then coerces her into a perplexing gambit. I won't say anymore since you really do have to read the thing for yourself.

French assures Miss Darke that he will help and tells her to say nothing to anyone. Leave it to him.

But the next day, Miss Darke's body is found floating in the ocean.  Somehow, the bad guys discovered what she'd been up to and disposed of her.

As French, feeling a bit guilty that he didn't have Miss Darke followed, delves further and further into the story initially told by the victim, he finds two other murders, two other young women killed by 'drowning' - two who also happened to work in the box office of two different theaters.

Baffled, French continues to investigate, trying to find out what these clerks could be doing that would benefit a murderous gang. In pursuit of the bad guys, French is called upon to commit burglary but does so with aplomb since there's no other way for him to get the evidence he seeks. It's THAT sort of case.

Going into this tale, I expected (as per usual with Crofts) to be puzzled, confounded, entertained and in general, led about by the hand since there's no one who can fashion a perplexing plot quite like Crofts. And sure enough, I read the book through in just a couple of sittings, muttering to myself. There's little characterization here, so be warned, but you won't miss it. It's not really needed in this sort of story.

But I like that one of the characters, a box office clerk named Molly Moran, turns out to be a plucky girl who, hit over the head, kidnapped and thrown into a car tied hand and foot and wrapped in a rug, then threatened with a horrible death - NEVER gives up the will to survive.

AND on top of that, there's a hairsbreadth last minute chase across English country roads to the sea.

I recommend this very British, very intriguing, very convoluted tale which is not strictly a whodunit but a step by step investigation with dead ends at every turn - just the sort of thing I love.  We basically know who the bad guys are, but we don't know what they're up to except that they're willing to murder for it.

I won't say any more about the plot because it's one of those that you really need to unravel for yourselves and I won't dampen the joy of that. Just go ahead and download this wonderful puzzler while it's still available.

And since it's Friday once again, you know the routine. Head on over to author Patricia Abbott's blog, Pattinase, to see what other forgotten or overlooked books other bloggers are talking about today. The list and the links are there.
Posted by Yvette at 12:30 AM