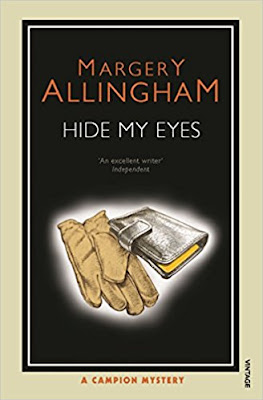 Except for a rather abrupt end, this is a superb book from a writer whose work continues to surprise me. It is also the sort of book that could teach modern day writers who specialize in serial killer tomes, a thing or two or three. Can you imagine a serial killer book that doesn't relish violence? A book with no eviscerated corpses lying in their own gore, no disgusting visuals or sick humor - yet still a book which draws you in, captures you, frightens, thrills and gives you the absolute creeps? This is the brilliance of HIDE MY EYES.

I was never a fan of Margery Allingham's work until very recently and I still cannot stomach Lugg and too much of Albert Campion is quite enough, if you know what I mean. But Allingham seems to have written several books in which Campion either doesn't appear or if he does, he's practically missing in action or lost his memory, i.e. TRAITOR'S PURSE which is my second favorite Allingham book so far. I tread timidly through the stacks of her titles and I'm happy to say, except for a dud or two, I have been rewarded for my timidity.

At this point, though, nothing I've read of hers, touches HIDE MY EYES. And yet, here is a book which almost flaunts the sorts of things I generally avoid.

2) Multiple points of view including the killer's. (Geez, does this have to be done well to keep me reading. Because, you know, I generally DO NOT CARE what a killer's thoughts are.) The trick here is that we are privy to the killer's interactions, more than his thoughts. He is a sociopath who marches  to the tune of his own drummer, a cold-blooded creature masquerading as normal.

3) We know who the killer is almost from the very beginning. This, somehow, and unlikely as it sounds, just adds to the suspense of it all. It's a fascinating drip, drip, drip effect.

4) No hero to speak of.  Even the young romantic pair, a naive young girl and an inquisitive red haired chap of the type Golden Age writers created routinely to fill out the ranks, do nothing much to catch the killer (yeah, there's a bit of a slug fest at the end, but even that is anti-climactic). In fact, the young man never actually catches on to what's REALLY going on at all - he even hands the killer back his gun (!?).

With all this you'd think, well how good can the book be? I mean, look at that list.

Why does it work so very well? Maybe it's because Allingham outdoes herself in plotting the thing - the book flows almost effortlessly from first page to last. Couple that with her natural ability to set a dark and ominous stage and you get one of the best books of this type I guarantee you will ever read.

It begins on a dark and stormy night in London, the kind of night tailor made for murderous doings.A smallish old fashioned country bus in which two elderly riders sitting side by side can be seen, slows to a stop in an alley. The bus driver steps out into the night. The couple sits, possibly asleep, while a murderer goes about his stealthy business.

"He looked thirty or a very years older and his face still possessed some of the secrecy of youth. He was good looking in a conventional way, his features regular and his round eyes set wide apart. Only the heavy muscles at the corners of his jaw, and the unusual thickness of his neck, were not in the accepted fashionable picture. The most outstanding thing about him was an impression of urgency that was apparent in every line of his body, a strain and a determination like a climber's nearing a peak."

Later we visit nearby Garden Green in daylight, it is one of those quietly run down London enclaves, in this instance, the setting for a small, private museum full of bizarre artifacts. The  museum, which is attached to a house, is kept up by a nice gray-haired old lady named Margaret (Polly) Tassie. She does this as a tribute, in memory of her beloved late husband's eccentric collecting tastes.

Into this little house comes Annabelle Tassie, a lovely, young, country-bred thing who has been sent - in lieu of a married older sister - to stay with this distant relative in London. Mrs. Tassie is trying, in her own round-about way, to mend fences after a long ago family breach.

At Annabelle's request, Richard Waterfield, a family friend of Annabelle's, will be around to keep an eye on her should the need arise. He hasn't seen Annabelle in two years, but is not surprised when she writes to him - he is, however, surprised by how lovely the girl he knew as a teenager has become. Isn't that always the way?

Mrs. Tassie and her late husband Freddy never had children, but they did befriend an engaging young man whom they doted on as the years went by. Older now, he is still in the picture and shows up now and then behaving almost as a de facto son. Mrs. Tassie regards him with an indulgent eye. She wants to believe the best of everyone.

As I mentioned, this is one of the books in which Albert Campion makes very little impact since he is hardly on the scene at all and that's just as well. Mostly it's the physically imposing C.I.D. Superintendent Charlie Luke's investigation and he sets the ball rolling by calling in Campion for a chat.

"It was one of Charlie Luke's more engaging peculiarities that he amplified all his stories with a remarkable pantomimic sideshow which he gave all the time he was talking. He drew diagrams in the air with his long hands and made portraits of his characters with his own face."

Luke has a hunch about a murder. Though Campion isn't much taken with said hunch, despite Luke's explanations and digressions, he will get drawn into the mystery once a fortuitously placed phone call arrives.

There are several murders to link and a crafty killer operating with impunity to catch, and along the way, some sympathetic characters whom the killer may or may not harm as we suffer impotently wondering if, how, why and/or when. Midway through, there is one unsettling chapter in which Richard Waterfield, on a hunch of his own, shows up in the dark of night at a large, shadow-filled junk yard (I forget what they're called in England) blindly finding his way through a large maze of intimidating mounds of debris and ominous salvage. Not knowing what might be lurking in the shadows, he comes upon a tumble down brick shack with a sinister interior.

The tension builds from a whole host of seemingly ill-assorted events, all moving, bit by bit, towards a final denouement. Too much tension for me. I had to stop now and then and take anxiety breaks. The clues mount up and the dots are connected, but there is still no apparent proof - the careful killer remains elusive.

In the end, it is not really police work, except in a roundabout way, that precipitates a climax, it is the killer's own personality.

The ending, as I mentioned, is somewhat abrupt, but other than that, this is the sort of book you really do not want to miss if you are at all in the mood for a suspenseful thriller written by an expert. If so, drop everything and move this one to the top of your TBR pile.

Author Patricia Abbott, our regular Friday host is taking a break, so Todd Mason will be handling hosting duties this week at his blog, Sweet Freedom. Don't forget to check in to see what other forgotten or overlooked books other bloggers are talking about today.