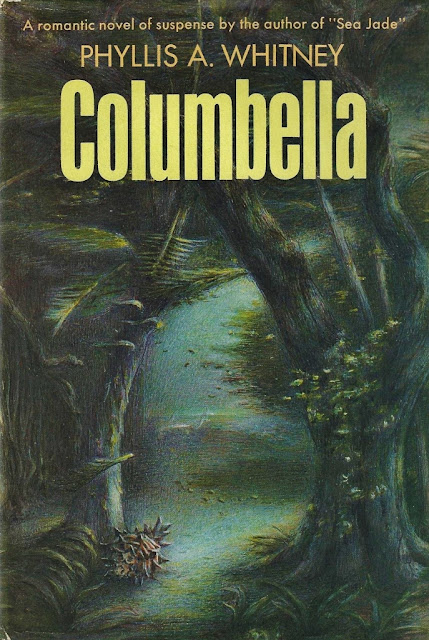 I recently re-read Phyllis Whitney's WINDOW ON THE SQUARE (reviewed by yours truly upon my last re-read in 2011) and reminded myself yet again how much I enjoy these sorts of semi-gothic romantic suspense stories (without gore) that were prevalent in the 50's and 60's and even into the 70's. I once read them by the bucketful. Hopefully the bug hasn't bitten me again, but who knows?

I've always been a sucker for a certain sort of strong, dark, silent hero with problems, at least in books - if the guy broods, even better. It all began with JANE EYRE's Mr. Rochester - I guess I imprinted on him when I was young and impressionable.

Give me a house full of troubled inhabitants, a brooding hero (see above), a young woman fleeing her own troubled past, evil lurking in the shadows and now and then, an immoral woman bent on destruction and I'm there.

COLUMBELLA was another Whitney favorite of mine and since Kindle had it on sale one day, I succumbed.

The story is set on St. Thomas in the U.S. Virgin Islands. There are several properties involved since the hero is an architect, but in general the main action takes place in a house high on a hill overlooking the harbor. Beautiful sunsets, lush vegetation and windswept island breezes are all part of the scene. Not to mention a soaring hurricane near the end. But before we get there, there is trouble to be dealt with and secrets to be aired.

Jessica Abbott is a former schoolteacher fleeing a troubled life stateside as the 'caretaker' daughter of a beautiful, charming, feckless and flirtatious mother (lately an invalid due to an accident) whose influence didn't do Jessica any good. In fact, there is an old story of a fiancee who was more in love with Jessica's mother than with the young woman herself and well, you know how that goes. Not that Jessica blames her mother, after all, mom didn't do anything with malice aforethought.

"There was a great deal about my mother to love - her gaiety and sweetness, her interest in the problems of others that made us all open our hearts and talk to her, not realizing at first to what deadly and yet innocent use the things she learned might later be put. Even her helplessness was sometimes endearing and undisturbing as she grew older. Not that she had lost her beauty or her ability to trouble young men with longings she had no intentions of satisfying with more than kind words and a touch of the hand....Before he died, my professor father had warned me that I must look after her because she could not look after herself - she did not even know who "herself" was. I had kept my promise to him. That, at least, I had done.

But here in St. Thomas I could lie on the sand, walk the waterfront, climb the hills in a state of suspension that postponed any coming to grips with the fact that I had no life of my own.'

Upon her mother's death, Jessica 'escapes' to St. Thomas for solitude and official licking of wounds. While there she is importuned by Maud Hampden, a matriarch friend of her aunt's to come stay at Hampden House and serve as a kind of buffer between 14 year old Leila Drew and her mother, Catherine. There is very real harm being done to Leila - an impressionable young girl - by a selfish mother who is first, last and foremost only interested in her own pleasures. In fact, the woman is mentally unbalanced, but you know how these wealthy old families are about this sort of thing.

To get her out from under Catherine's unsavory influence, Leila is on the verge of being sent off to boarding school in Denver (oh my God, Denver!) by her father Kingdon Drew who grew up in Colorado. King is a brooding (uh-oh), silent man worried for his daughter and fed up with his beautiful wife's behavior - in fact, though staying at Hampden House, the two have been living separate lives for years. Why a grown man would put up with a wife's improprieties to this extent isn't really made clear, but for the sake of the story we must accept that he feels trapped because of his daughter's blind allegiance to her mother.

Naturally Jessica sees the traps inherent for her in this familiar situation. Though her own mother wasn't evil, it doesn't take long for her (or the reader) to realize that Catherine is hellbent on destroying her husband through the determined undermining of his relationship with a daughter whom she actually cares nothing about. Tearing around the islands with a younger man in tow, Catherine does everything she can to inflame and infuriate her family which includes not only her mother and estranged husband, but also a drab sister and her shell collector husband, an enigmatic man who has his own secrets to keep.

In the meantime, Jessica tries to befriend young Leila with varying results. At first convinced she can do little, she comes to the realization that Leila must somehow be saved from her cruel mother. Up until Jessica's arrival, basically just lots of hand-wringing going on.

But there is a great deal of ugliness lurking at Hampden House and when things come to a head,  there is also murder to contend with.

And last but certainly not least is a powerful hurricane which strikes the islands at just the right time. Well, you kind of knew that a story set in the Caribbean needed a hurricane to put things right.

If you like this sort of thing (as I, occasionally, do), you'll enjoy COLUMBELLA. Phyllis Whitney had the knack for telling an involved romantic tale filled with suspense and engaging people. Though in this particular tale, the characters are not all that likable, the story still works particularly because of the sense of lurking evil (with even a small touch of voodoo) and the lush setting. Whitney was always wonderfully right in her settings and also in all the ways she worked to come up with troubled heroines and strong, stalwart heroes.

And in addition, I learned quite a bit about the Virgin Islands, certainly more than I'd known though I visited St. Croix once many years ago, probably around the time this book was written.

It's Friday and yet again I'm running very late with my post. Apologies. Don't forget to check in at author Patricia Abbott's blog, Pattinase, to see what other forgotten or overlooked books other bloggers are talking about today. Patti has all the links.