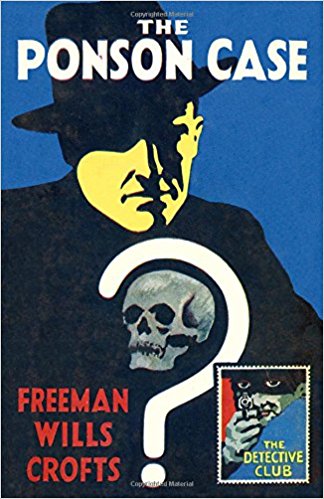 If you don't like to read police procedural mysteries, you probably won't like the books of
Freeman Wills Croft. Happily for me, I love police procedurals and most especially love the old practitioners of the craft. I haven't read Croft in ages, but began to go through his work again last year - unfortunately, not a lot of it is easily available. But little by little, as the saying goes. And since I don't remember what I read years ago, it's like doing it again for the first time.

Warning: Croft is VERY fond of railway schedules and 'timed to the minute' alibis. And though normally my eyes glaze over when reading alibi minutiae, somehow with Croft, I take it in stride. And railway schedules - ha! I have trouble reading any kind of schedule - you should see me, a grown woman of some intelligence, lost in the utter incomprehension of a town bus schedule. Sad. But this doesn't stop me reading Croft. Go figure. It might just have something to do with the fact that he was a very clever constructor of plots, a writer of the sort of books that few can do well. He also comfortably understood his limitations and seemed happy enough within them. Once you get deep into a Croft book, it's hard to put the thing down. Listen, I'm the least detail oriented person you would ever meet, but I love his work.

And another thing: Of Croft's very early work, there's less of that turn of the century over the top exuberance that you find say, in E.C. Bentley's books, and other writers from that time. Croft avoided the curlycues. AND his women were often not of the faint of heart variety.

THE PONSON CASE (1921) is Croft's second book and does not feature Croft's most famous protagonist, Inspector French of Scotland Yard who will debut a few years later - this time out it's Inspector Tanner who has the case. It was published in 1921, so this is kind of old school before old school was old.

Yet at the same time, there's a rather strong female character  who has lots to do with pushing the case forward even where her male cohort is ready to give it up as a lost cause. The plot develops from their point of view as well as from Tanner's.

Okay so ANY reader (of a suspicious nature) who has read as many mysteries as I have (and more) will be able to figure out, more or less, not HOW the crime was committed but who was likely involved. There is a very strong clue passed off in the early part of the book in an information dump dialogue scene.Though that doesn't prevent a couple of surprises as we near the ending. An ending which dovetails nicely and explains just about everything to the reader's satisfaction.

Sir William Ponston disappears one evening from Luce Manor, his beautifully appointed country house in the south of England. Except for the servants he had been home alone as his wife and grown daughter were away on a short trip. The beginning couple of chapters are the sort of thing that I really do enjoy reading - we get into the story immediately in a vivid setting easy to picture.

When his body is later discovered, it appears Ponson had inexplicably taken out a boat from his boat house the night before and gone out alone on the nearby Cranshaw river - something he'd never done before. Once on the river he apparently lost control of his oars and his small boat drifted too close to a waterfall and catapulted him over some rough water (well known in the neighborhood to be treacherous) to his death.

The whole thing seems incomprehensible to his family and soon enough to the authorities. Ponson didn't drown, he was already dead when he entered the water AND there's suspicious bruising on the back of his head. Uh-oh.

The meticulous Inspector Tanner of Scotland Yard is called into the case. It is known that both Ponson's son, Austin and his nephew Cosgrove are hard up at the moment and in need of funds. They will both be much better off under the terms of Sir William's will. Suspicion naturally falls on both men. Both both have seemingly unbreakable alibis for the night in question.

As is often the case in a Croft book, the investigation hinges on the strength of seemingly unshakable alibis as well as on investigatory minutiae, for instance: footprints. Inspector Tanner takes us over the evidence bit by bit as he uncovers and tries to make heads or tails of it.

Tanner's approach is to weigh each and every clue, each and every statement, and tortuously go over the tracks of the apparent killer or killers since it seems obvious in this case that there is more than one person involved. At an exciting point mid-story, Tanner hires a plane - it's 1921, so the plane is a  two man affair and there's wind and fog and lots of the sort of atmosphere I love - to fly him to Lisbon, Portugal on the trail of a suspect who has made a mad dash to the continent.

This makes for a rather thrilling action sequence in an otherwise localized tale. Tanner's energy is contagious and Croft knows how to write this sort of thing so well.

Some might find the Inspector's keenness for detail tedious, but there's a certain admirable quality to Croft's fine tuning of his plot details. You just can't help being amazed even if I did fast read some of the more esoteric timing of certain alibi aspects.

If you are of a mind to read some really well crafted, well written period detective tales of the police procedural variety then Freeman Wills Croft is the writer for you. I really do enjoy his work.

Todd Mason will be doing hosting duties some time today at his blog, Sweet Freedom, while Patricia Abbott takes a break. So don't forget to check in and see what other forgotten or overlooked authors other bloggers are talking about today.