Friday Forgotten (or Overlooked) Book: THE MYSTERY AT THE ORCHARD HOUSE (1946) by Joan Coggin 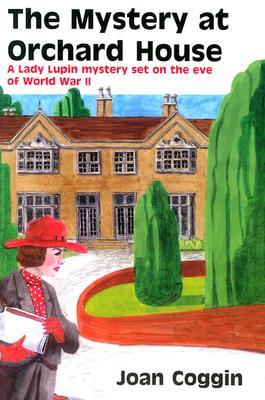 Joan Coggin is yet another mystery writer I hadn't heard of until recently. Her Lady Lupin series would probably have remained unremembered and impossible to find except they were republished in 2003 by Rue Morgue Press.Thank goodness! At the moment those still seem to be the only copies available online.

This is a short-lived series since apparently the author stopped at four. The books are most definitely cozies and her heroine is Lady Lupin Lorimer-Hastings, a ditzy but kind-hearted society gal who uncharacteristically, falls in love with a Church of England Minister years older than herself and marries him - much to the surprise of everyone in her lively set. Her family, on the other hand, is just relieved she didn't married anyone in said lively set.

The marriage is a happy one and husband and wife are, in time, delivered of a bouncing baby boy whom they adore.

Okay, when I reviewed the first book in the series, WHO KILLED THE CURATE? (which I simply had to read because: great title) I was thoroughly taken by Joan Coggin's fun attitude towards her characters and the shenanigans they get up to. Though murder is no joke, there's still a lively enough atmosphere in cozy English village life (at least in book form) to offset the horror of untoward death. As well as, incongruously, a few laugh out loud moments as we share with Lady Lupin (or Loops as she's called by close friends) her inability to quite grasp the practicalities of day to day life as it applies to a minister's wife. She was a London city girl after all, and worried she'd find village life boring. But that is not to be. Not with everyone just waiting to pour their trials and tribulations out to her.

There is no murder in THE MYSTERY AT ORCHARD HOUSE which actually makes some sense. In a sane world how many murders could a Minister's wife be expected to run into, let alone solve? Let's get real here.

And truth to tell, murder isn't missed - there's just too much going on in yet another lively story featuring the sorts of people one might find fatiguing in real life, but in book form are no end amusing. This time out Lady Lupin is staying at her good friend Diana Turner's newly inherited house-turned-hotel out in the lovely countryside of Kent. Lady Lupin is exhausted, having just nursed her family through a severe bout of influenza then becoming ill herself. Ergo, Loops needs a recuperative break from normal daily routine. So off she goes to Orchard House for a carefree rest.

Unfortunately, 'carefree' is not in the cards.

There's just something about the lovable if screwy Lady Lupin Lorimer-Hastings that causes people to unburden their souls to her. This may come in handy for her role as a minister's attending wife, but it can get tiresome on a day in and day out basis. Maybe it's her kind heart coupled with a beguiling scatterbrain nature, but whatever it is, people respond and tell her their troubles whether Loops wants to hear them or not.

THE MYSTERY AT ORCHARD HOUSE is not a murder mystery, but a mystery of mistaken intentions and miscues with a wonderful cast of mostly ridiculous characters, some of whom are impossible to like, and a couple for whom you'll want to see a happy ending. And Lady Lupin gets the chance all over again, to get everything wrong and misdirect us all with attempts at deductions which occasionally (if accidentally) are right on the mark.

As I mentioned, there is no actual murder, just a series of confusing thefts and possibly an attempted murder involving a vehicle. All the while, Lady Lupin must untangle some unlikely alliances, align a few misaligned hearts and help straighten out the career path of a young poet.

We also get a sharply satirical caricature of a novelist - a woman so self-involved with her own work (talk about tunnel vision) that she causes Lady Lupin to wake the entire hotel and run out into the dead of night searching for a missing child much to the chagrin of everyone when it turns out that the 'child' in question is merely a missing manuscript. Oops.

Sort of like a female Bertie Wooster without a Jeeves to guide her through, Lady Lupin Lorimer-Hastings is a complete delight as she fumbles her way towards a very satisfactory ending in this cozy dip into a world which, if it ever existed, is now gone forever.

A frantic and very funny second book in a series I've grown fond of. Can't wait to read the two remaining.

Since it's Friday again, don't forget to check in at author Patricia Abbott's blog, Pattinase, to see what other forgotten or overlooked books other bloggers are talking about today.