Friday Forgotten (or Overlooked) Book: PUT OUT THE LIGHT (1931) by Ethel Lina White 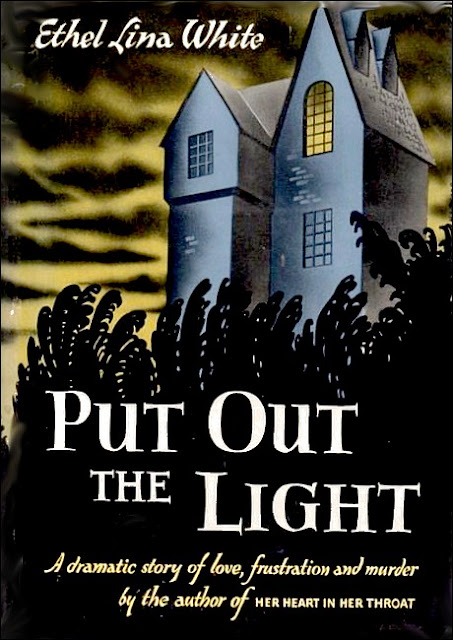 I'm kind of venting today, so please bear with me.

Author Ethel Lina White has a major failing - she's not very good at creating the nuts and bolts of an actual setting. That gene is missing from her make-up. So when I'm reading her stories, I'm kind of floundering around trying to find my footing.

I've read several of her books perhaps trying to find one that I'll love. I liked FEAR STALKS THE VILLAGE though it was not as solidly grounded as I would have liked. It was set in an English village which failed to coalesce in my imagination. A generic setting which certainly does not come anywhere near the visually well conceived English villages created by Agatha Christie.

(Read, though didn't love, THE SPIRAL STAIRCASE. Extremely disappointed in THE WHEEL SPINS which is the basis for THE LADY VANISHES, one of my very favorite Hitchcock movies.)

It is my belief that in these sorts of books, the setting is almost as important as the characters. To my way of thinking, if you can't stabilize the surroundings for a mystery novel, it's half over right there. Some writers can pick you up and drop you down in any setting almost immediately, even within the first opening paragraph. They have the knack. Christie had it. She could transport me immediately to wherever and whenever with just a few sentences.

But Ethel Lina White just can't quite do it. She creates a place for her story but doesn't give it any foundation - no toe hold for the reader. I'm usually left trying to visualize and failing. Occasionally that doesn't matter in a book, but most of the time it does.

Some of you may know that I don't write negative reviews if I can help it and this is not really one. I read PUT OUT THE LIGHT all the way through which I would definitely not have done if I'd hated it. It's just that this is one of the stranger mysteries I've read lately and I guess I need to share its strangeness.

Cause here's what I'm thinking - maybe it's just me.

PUT OUT THE LIGHT concerns the murder of a woman named Anthea Vine, wealthy owner of Jamaica Court, an estate perched on a hill above an English town. In that same town live a bumbling Inspector of police and his concerned and keen-eyed sister.

Now, one would think that a policeman with the last name of Pye would be kind of a humorous character, but in this book he is, maybe, just mildly amusing. Pye desperately wants to solve the only murder he's ever been faced with, hoping against hope that Scotland Yard won't be called in by his superiors. But all this is lacking any real connecting charm which is key for this sort of character. The sister, Florence, is supposed to be the one with the brains, but she too is charmless. She helps her brother (whose old fashioned notion that women should be seen and not really heard rankles a bit) by sort of 'directing' him without his being aware he's being directed. He's not a boob exactly, he just needs a bit of guidance.

Florence Pye also likes to tell fortunes. This time out the cards presciently read: 'Death to an old woman.'

Anthea Vine (our pre-arranged victim) is such a strange character that I kept thinking, wait - what? She is apparently a grotesque old woman who wears tons of make-up and likes having young men about her. She preens, she parades around like some young femme fatale, pretending that the men indulge her because she is still beautiful and alluring. Vine is ridiculous in her conceit but enjoys the sense of power and manipulation. And because she is extremely wealthy nobody likes to call attention to the absurdity of it all.

She is a woman who has convinced herself that she is still wickedly sexy and attractive and here's the main problem: it's difficult to take her seriously. (And oh my God, her laborious nightly beauty ritual is outlined in detail.) In some scenes, Anthea comes across as younger than she's supposed to be so that when she's referred to as 'old' the reader is taken aback. She is written in an oddly inconsistent way which is off-putting and VERY theatrical. But then I realize that back in the day, a 40 year old woman was considered 'old' and forget about someone already in her 50's - she would be at death's door. Unfortunately, in some scenes Anthea seems like someone who might be geriatric then in others, she suddenly seems younger. It's almost like the author loses track.

And another thing: here's this woman ripe for murdering and she doesn't get bumped off until well into the book. She's just not THAT interesting a character that we need to be in her company for so long before she gets her just deserts. The other characters, some young people who live in the house with Anthea Vine are not any more interesting in my view. They are her three wards, dependent and hoping to profit upon their malevolent benefactor's death. All have been under Anthea's thumb, including her plucky secretary and the local young doctor.

Anthea pretends (or is she pretending?) that she has ulterior designs on the doctor and even one of her wards - an idea that only revolts them. (Maybe we're supposed to sympathize with Anthea's fading attractions and frenzied need for attention but I didn't.) It's all about control and money.

Though why these youngsters can't tell Anthea to go to hell then go out and get jobs, is beyond me. But in those days that may have been harder than it is today. Also with big money at stake, it's not always easy to walk away even at the sake of your self-respect.

Anyway, a couple of small odd burglaries occur locally and Inspector Pye is called in to try and find the culprit. In the meantime, up at the big house on the hill, Anthea Vine continues to bully those around her, relishing her power and behaving like someone just begging to be murdered.

She does have moments of gothic discontent though - late at night, she imagines shadows lurking about and closing in on her. Very unsettling in that dark and moody old mausoleum of a house for sure. But even that goes on too long.

Eventually, of course, she is murdered and we get down to sleuthing.

In the end, Inspector Pye (with the behind the scenes nudging of his sister) solves the case, putting together a quirky set of curious clues.

Not one of Ethel Lina White's best, but maybe not her worst. I'll probably read one or two more of her books because she did write quite a few and I remain hopeful.

Edgar and Anthony award nominated author Patricia Abbott is taking a blog hiatus until June 12th so Todd Mason at his blog, Sweet Freedom is doing hosting duties. Don't forget to check in and see what other forgotten or overlooked books other bloggers are talking about today.