Friday Forgotten (or Overlooked) Book: SHE DIED A LADY (1942) by Carter Dickson 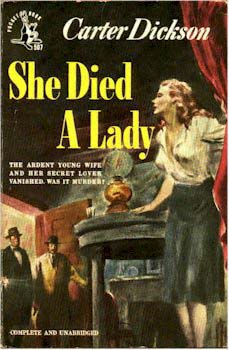 We all know that John Dickson Carr had several pseudonyms and to my mind the books he wrote as Carter Dickson are some of his best. Of Carr's two rotund and decidedly eccentric detectives, Sir Henry Merrivale always pleased me more than Gideon Fell.

This nursery rhyme is the sort of inconsequential that goes through mind now and then and I've always wondered who Dr. Fell was and why anyone should dislike him enough to write a little ditty about it. I always wondered too if John Dickson Carr picked up the name from the rhyme. When I was reading all of John Dickson Carr in the long ago and far away, I remember having a preference for Sir Henry Merrivale though, unlike the writer of the ditty, I didn't actively dislike Gideon Fell.

And now thanks to Sergio over at Tipping My Fedora, I've renewed interest in one of Dickson's best books. I owe you one, Sergio.

Oh gosh how I loved this book.

It is an almost visceral pleasure when you realize you are in the presence of a true master of mystery and detection so pardon me while I gush. SHE DIED A LADY is nothing less than a masterpiece. I can't imagine any of Dickson's other books will measure up to this one, but that won't stop me from looking to reread the whole batch during the next few months.

Though I never did read John Dickson Carr over and over as I read Agatha Christie or even Josephine Tey or Rex Stout, I always thought I'd go back to his books at some point. This seems like a good a time as any, since SHE DIED A LADY has reminded me just how wonderful Carr can be.

The story features an impossible sounding crime (a John Dickson Carr specialty) - two people who are having a clandestine affair go out to the edge of a precipice overlooking a rocky coastline and do not return. Have they jumped? Is it suicide? No - that much is obvious early on since once their mangled bodies are fished out of the sea, both show evidence of having been shot. So what actually happened?

The story unfolds in the first person from the 'pen' of elderly Dr. Luke Croxley, a retired G.P. who still has a few patients though most of his practice has been turned over to his son, Dr. Tom. Dr. Luke is a likable sort even when he is haplessly clueless and though he is an honorable man, he is not an especially reliable narrator.

It is through his eyes that we view characters and events in the seaside village of Lyncomb during the early days of WWII. Coincidentally, Sir Henry Merrivale has come to town to have his portrait painted by a local artist. But Sir Henry has severely stubbed a big toe which, necessarily, has him tooling around in a motor driven wheel chair. Yes, you can imagine the chaos.

Our narrator, Dr. Luke, has been drawn into the emotional maelstrom of a woman he admires, the lovely and charismatic Rita Wainwright who is unhappily married to an older man. She has blindly fallen in love with a younger guy named Barry Sullivan, an erstwhile actor (no, not THE Barry Sullivan known to a few of us vintage movie aficionados) who happens to be indecently handsome and on the make.

It is interesting to note that this is one of very few mysteries written in the early forties (at least that I can remember) which doesn't mince words and actually mentions sex between unmarried adults.

As the story progresses, there are several active red herrings thrown at us, one of which I fell for. Very annoying to find out, in the end, that my guy was not the killer. And when the final, final ending is revealed, it is all very satisfying and gives credence to the idea that despite being a brilliant detective and dealer in facts, Sir Henry Merrivale is first and foremost a good man.

SHE DIED A LADY is easily available from Abe Books for very little cash. I was lucky enough to get a copy with the cover shown above. But whatever cover, don't miss the opportunity to read one of the best from John Dickson Carr/Carter Dickson. A brilliantly plotted, well thought out mystery full of clues passed in front of you so fairly that when Sir Henry explains everything in the end, you say: Oh, of course, why didn't I see that??

Since this is Friday, don't forget to check in at Edgar and Anthony Award nominated author, Patricia Abbott's blog, Pattinase, to see what other forgotten or overlooked books other bloggers are talking about today.
Posted by Yvette at 12:30 AM