Friday Forgotten (or Overlooked) Book: MURDER BY THE CLOCK (1929) by Rufus King 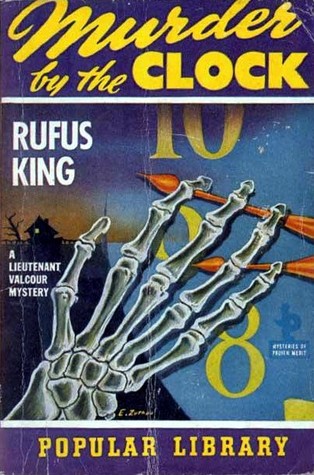 'The story of a man who was murdered twice!' Kind of. Sort of. I'm a fan late to the work of Rufus King (1893 - 1966) which I seem to only have discovered thanks to John at Pretty Sinister Books, a guy who knows everything and anything about long lost authors and their works.

At any rate, MURDER BY THE CLOCK is apparently King's most well-known book - the first featuring Lieutenant Valcour, NYPD, in a series featuring eleven books.

(An aside: One of the little known and more interesting facts about King is that he also wrote the only satirical Nero Wolfe mystery I've ever read, HOLIDAY HOMICIDE. All about bout an eccentric genius who solves mysteries, but instead of collecting orchids, he collects rare (edible) nuts.)

MURDER BY THE CLOCK features all sorts of improbabilities and indignities for Valcour to wade through, plus lots of psychology to be explored and considered. Valcour is beckoned to the case by the intriguing and opaque femme fatale, Mrs. Herbert Endicott - she is worried about her philandering husband and thinks 'something' might have happened to him. He has gone out to meet his mistress but she - the missus - is convinced that all is not as it should be. Beguiled by Mrs. Endicott's oddly calm self-assurance, Valcour searches hubby's room to see if anything is missing or amiss.

The lieutenant soon discovers that something HAS indeed happened to Herbert Endicott - he is found, for all intents and purposes, dead. In fact he never left the house at all. Then follows one of the more unique features of this story - something I've never come across in another mystery in all my many years of reading them -  the doctor called to the 'murder' scene devises a plan to bring Endicott back to life once he realizes that Endicott is not ACTUALLY really and truly dead, just comatose. Turns out that the man had a bad heart and it looks as if something occurred to shock him into insensibility.

Assuming that once the would-be murderer realizes that his victim isn't dead he might come back and finish the job, it's Valcour's duty to make sure that Endicott doesn't get 'murdered' again.

The entire plot develops over one long night, hence the title and the late night aspects add a nice surreal element to the story. We get a few changes in point of view, but not enough to annoy and at the end, we get a strange unsettling do-over. I can say no more.

To my way of thinking, the men in this book are not as well formed as the women characters - there is the husband's unexplained strangeness and peculiar way of talking which seems to be at odds with the callous treatment of his wife. One wonders what on earth the wife ever saw in him and really, hard to take a grown man named Herbert seriously, especially one who is not especially handsome or charming and allegedly uses baby-talk to weasel himself out of the house. Also, it's hard to take the wife seriously, until you realize what is actually going on. As I mentioned, this story is bristling with psychology.

And speaking of psychology, besides the victim and his wife, there are two peculiar servants who positively seethe with hatred of Mrs. Endicott. There is a supposed family friend who carries a concealed stiletto-like paper knife and there is the 'dead' man's mistress who is being blackmailed by her own evidently crazed mother. Lots of bizarre doings.

It is a very difficult thing to make an intriguing mystery with so few suspects, such a short span of time and such limited settings - three apartments - but Rufus King pulls it off.

As John mentions in his review of the book, there is a keen sense of gloom and doom - okay, gothic moodiness - indulged in by the author and his detective, which I liked. This is not your average Golden Age murder mystery as soon becomes evident. It is odd but clever in its oddness which includes a unique double-take ending.

I've read two Valcour mysteries and enjoyed them both though they couldn't be more different: MURDER BY THE CLOCK and the excellent MURDER BY LATITUDE which takes place aboard a cruise. King is a very underrated and under appreciated author. One of those Golden Agers who should be much better known.

Since this is Friday, don't forget once again to check in at author and Edgar Award nominee Patricia Abbott's blog, Pattinase, to see what other forgotten or overlooked books other bloggers are talking about this week.