Friday Forgotten (or Overlooked) Book: THE FOLD by Peter Clines 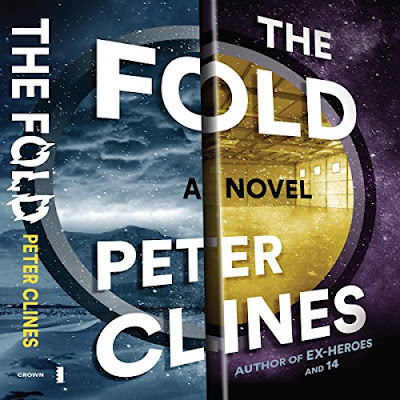 This book is from 2015 so it hasn't really had a chance to be forgotten or even overlooked, but what the heck I only discovered it by sheer circumstance so for me, it is an overlooked find.

You know, as much as I claim not to read science fiction hardly at all, I see that this year I've read a few and enjoyed them. So maybe I ought to stop disclaiming and shut up. Or maybe it's just that I only like a certain type of sci-fi (I know, I know, not in use anymore, indulge me) and when I stumble across an example, I enjoy all heck out of it.

THE FOLD by Peter Clines has a kind of a wild west rock'em/sock'em High Concept story-line with an intriguing main character of the sort I adore. So you not only get a seat of your pants story-line but a remarkable leading character with incredible talents essential to the plot. In other words, only he could have steered through to the eventual denouement. (Though I could have done without the love story. More about that later.)

Not that this is any sort of western, no. (Though it does take place out California way.) But it does have the vigor and color, the excitement of venturing into unknown frontiers. Even if the book begins quietly enough with a dinner invitation which almost immediately turns into a mysterious job offer impossible to refuse.

Well, actually, the book begins with one of those off-putting (at least for me) segue entries (clumsy in execution) in which we meet people who are not the main characters and something ominous happens which doesn't make any sense until later in the book. I don't like when an author does this because it is distracting and can often stop a story before it begins. But maybe that's just me. However, do not let this prevent you from reading further. Because if you do, you will have missed an exciting yarn which if it isn't turned into a movie really soon then I don't know what High Concept means.

Our hero is Leland Erikson (aka Mike) who is, at the moment, a high school teacher in Maine intent on staying below the radar. You might say that he is currently in a holding pattern, luxuriating - if you will - in day to day non-distracting routine while teaching early American Lit.

But the times they are a'changing.

Mike's friend Reggie Magnus runs a hush-hush government agency called DARPA (forgot what that stands for but is it important in a book of this kind? Nope.). He is in charge of funding various and sundry high level experimental projects. In that capacity (and because they are close friends) he shows up at the high school one day and invites Mike to have dinner with him.

During that dinner, Mike is offered yet another job of the sort uniquely suited to his special abilities. Though these offers have been turned down in the past, this time out the head of the specific project Reggie is dangling is Arthur Cross, a brilliant physicist and author of the best selling book, THE HISTORY OF WHAT WE KNOW.  Mike is coolly fascinated when he learns that Cross and his team have fashioned a kind of teleportation mechanism called 'a fold' which is, in effect, a distance hopping thing - a doorway. (Don't ask me to explain, except that it sort of makes sense when you read about it.)

At any rate, something is apparently not quite right with a project which has already cost millions and Reggie can't put his finger on what exactly is amiss. But before he hands Cross anymore money he intends to find out. To that end, he wants his friend Mike on the scene.

Long story short: Mike accepts the job and shows up at the lab in San Diego to observe and theorize. There he meets Arthur Cross who, naturally enough, questions the need for an 'outside consultant' on his very hush/hush project. He wants to know the 'why' of Leland Erikson.

'Mike took a deep breath and weighed his words. "I have some abilities that make me a worthwhile observer and theorist. Reggie's been trying to get me on the payroll for almost a decade. Your project's been the only thing he's ever told me about that interested me."

"He said something similar at the budget meeting. Could you be more specific?"

He sighed again. "I maxed out the only IQ test I ever took. I was given a few extra problems by the tester and she ballparked my IQ at over 180. Granted, I was under the recommended age, and it was the old Stanford-Binet, not the Titan Test or the Mega, so it isn't terribly accurate at that scale, but I confirmed the general range myself. On top of that, I've got an eidetic memory. Complete, instantaneous recall of anything I've ever seen or heard."

"I thought eidetic memory was something made up for science fiction stories."

"There are a few confirmed cases, although it's tough to prove someone remembers everything without having them remember everything for you."

As you might imagine, Mike's sort of 'gifts' are double-edged swords. One of the reasons he had preferred to stay an 'under the radar' high school teacher.

However, once his observational talents are engaged at project center in San Diego, he begins to note that things are, indeed, a bit 'off' and everyone at the site is behaving oddly. Not 'oddly' as in OMG! but just oddly enough to seem, well, odd. Nothing you can put your finger on at first, but as Mike continues to interact and observe he can't help (literally) but note that things are definitely not as Arthur Cross and his colleagues would have us think.

My main affection for this book arises from watching (reading) how Mike uses his skills and intelligence in ways that a 'normal' person might envy. In this situation it is just as well that his gifts are other-worldly seeming, since a 'normal' man would probably have been engulfed by the plot and the world as we know it would have come to an untimely end.

Okay, that's all I'm going to say. Except that there are some horrifically mind-bending things going on and even when all is explained I still had questions. Well, hey, I'm no physicist. There are monsters of course. They come in later in the book at just about the time we've come to realize that a big 'uh-oh' moment is upon us. There is death and destruction and all that sort of thing. There are even bugs. There are mutants. There is general ghoulishness and hair-raising escapes. And just when you think you know what's going on, turns out that it wasn't what you thought but something else.

There is also a love story that needn't have been except that it was one way to note the one character had changed in a certain way. I can say no more since it is a defining moment.

I wasn't happy with the love angle because I felt it didn't belong and slowed the action down. I was perfectly content just going along with Mike's mental cogitations (it involves ants), getting in groove with the fanciful way he went about his cerebral business. I would almost say that the emotional entanglement didn't fit in with the character, but maybe I would be wrong. (Note:Though Mike's name is really Leland, his nickname comes from a derivation of Mycroft, i.e. Mycroft Holmes, Sherlock's smarter brother. So that gives you an idea why maybe the love story seemed forced.)

Some reviewers online have noted that the ending seems like something brought in from another book but I didn't find it too bothersome other than to note that yes, certain aspects of it were almost overwhelming. And of course, this sort of over-the-top monster fest comes off as less than cerebral. But since this book is first and foremost a thriller, I shrugged off the incomprehensible.

(Having said that and just to be contrary, would someone explain to me how a Victorian physicist's fanciful equations on the likelihood of alternate realities results in the kind of monstrosity conjured up by the plot? That part of it, I admit, made little sense. But maybe it was chaos theory and that as we know can lead to all kinds of mischief.)

Believe me when I tell you that these are not major stumbling blocks. They certainly didn't keep me from continuing to read and note how much I was enjoying the improbabilities while thinking to myself - what if? Needless to say, I love a story that features a well-adjusted genius (not one given to  sturm und drang and bouts of self-doubt and obnoxiousness) - my kind of hero.

In conclusion: THE FOLD is a terrific sci-fi thriller even for those of us who might not think we are fans of the genre. It is that rarity in thrillers: a story where the main character is not a gun toting behemoth righting wrongs using heft and belligerence. (Unless you want to think of intelligence as 'heft' and I often do.) I think you will also be impressed with the author's dexterity and gift for naturalistic dialogue in the midst of chaos.

And lest you forget, the main character is a keeper.

Since this is Friday, don't forget to check in at author Patricia Abbott's website, Pattinase, to see what other forgotten or overlooked books other bloggers are talking about today.