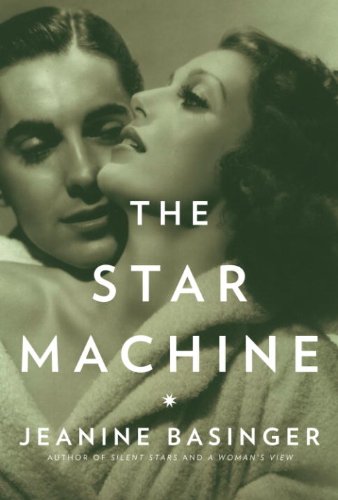 "It's a crackpot business that sets out to manufacture a product it can't even define, but that was old Hollywood."

The luminous machine that was the movie studio system of the 1930's, 40's and 50's is gone forever. That incredible movie-making era is now the stuff of legends. But while it lasted, the system gave us stars, stars and 'more stars than there are in the heavens!'  - at least according to MGM, one of the more prolific star-making studios of the time and home to the dazzling extravaganzas that still enchant us today.

But if you had asked anyone then and now to define what exactly made a 'movie star' they would be hard-pressed to respond except to note various examples and say, now 'that person is a star' or 'that person' but just HOW that particular person personified stardom remains (to this day) almost impossible to define.

THE STAR MACHINE is not meant, I think, to be full of surprises (though there are a few), instead the book evolves in rather calm fashion as more of a biography of the extraordinary American star machine shops of the day. Shops which, with a clockwork regularity, turned out star after star, movie after movie over the span of many years. Films we consider classics today were part of this movie-making factory efficiency, evidence of the richness of talent and genius working in Hollywood at the time.

Jeanine Basinger's engaging compendium of behind the scenes stories and back-stage machinations has moments of 'who knew?' and misty 'what ifs', not to mention, bios of stars such as Tyrone Power, Lana Turner, Loretta Young, Eleanor Powell, Mickey Rooney, Abbott and Costello, William Powell, Jean Arthur, Wallace Beery and Loretta Young, among many others. (A lot of this stuff the real movie maven will have picked up along the way watching and reading about their favorite movies, but probably not all of it.)

The stars Jeanine Basinger concentrates on are purposely NOT the absolute tip-top tier of Hollywood stardom, but most of them were - at least - well known household names. The author assumes that if you want to read about first tier stars in more detail, i.e. Clark Gable, Cary Grant, Marilyn Monroe and their ilk (though they are not overlooked in the book), it is easy enough to find sources. Instead THE STAR MACHINE concentrates more on the 'how-to' of the studio process - which is fascinating. Stars that worked their way up through the system are a more interesting study, I think, than stars who were 'instant' hits. After all, it is difficult if not impossible to explain why one person shines on the big screen and another person has no glow at all.

I especially enjoyed reading the author's take on William Powell and THE THIN MAN series of movies:

'The Thin Man series is unique in movie history...At the heart of the original movie was an ultramodern married relationship. (The screenwriters were married to each other, and not enough credit has gone to them for creating the witty, sparring, modern couple whose marriage worked.) In the depth of the Depression, Nick and Nora had clothes, money, cars, and plenty of pizzazz. Watching Powell swan around nonchalantly in the Thin Man movies explains why no one can make screwball comedies today. It's not, as everyone supposes, that they can't write them; it's that there's no one to play in them. Powell fills the frame, but without seeming even to care that he's in it. While players all around him are chewing up the scenery, their entire performances coming out of their mouths, Powell cocks an ear, leans casually forward, stuffs his hands in his pockets, raises an eyebrow and steals the show.

There is no actor today who can pull off Powell's elegant thumbing of the nose at society while maintaining the sense of a man who can be counted on, a loyal, loving husband and father, but, still, a dude, an outsider. And no one can toss off a line like Powell. After Nick and Nora have a son, Charles is asked, "What's the big idea of the kid?" He replies, "We have a dog...and he was lonesome." He turns to Loy. "That was the big idea, wasn't it Mommy?" His cadence is perfect. His emphasis impeccable.,,"

Basinger is one hundred percent right, there is no actor today who can do what Powell did seemingly without effort. Actually, there is no actor today who can do what dozens of stars did then. Hollywood has evolved, and not for the better. The screwball comedy has come and gone. But thankfully we have the films online or in DVD form for us to swoon over. Of course to my mind, there are other sorts of movies that cannot be done today precisely because the necessary actors with the necessary talents no longer exist. For instance: the swashbuckler or the musical with original music (or even with borrowed music), or the goofy mystery, etc. Yes, they occasionally are duplicated or worse, 'brought up to date', but they rarely work well; precisely because the actors are imitating a style. There is nothing original going on. It's all poser-y and fakery. And of course it doesn't help that most  young actors today look alike.

But enough about my own prejudices, let's get back to the book:

One of many things I enjoyed about THE STAR MACHINE was learning how the studios selected actors in (often misguided) attempts to 'manufacture' stardom; these lucky few were 'tested' in early two-bit roles to gauge audience reaction. The audience was polled and whomever they were most excited about in the movie (sometimes NOT the actor or actress, the studio was pushing) got a nod for the next slightly larger part and so on and so forth. In a way it was almost like school. Though sometimes, as with Errol Flynn, lightning could strike and did. Through a series of fortuitous circumstances, Flynn - a relative unknown - was cast as the lead in CAPTAIN BLOOD (his previous film roles had been tiny with little or no dialogue), and that was all it took. Sometimes an actor only has to find the right role (often by chance) and the rest is movie history.

But that didn't happen often and most of the time, as a matter of course, stars had to be fashioned, built from the ground up. Author Jeanine Basinger takes you behind those scenes: make-up trials and tribulations (freckles were considered a scourge, unless they weren't), costume debacles, hair-dos and don'ts and other fascinating stuff of legends. Imagine if Rita Hayworth's low hairline hadn't been lifted (electrolysis) and her hair not dyed red. She would probably have remained Margarita Cansino, type cast as a B-movie Spanish dancer till the end of her days.

(By the way, if you want to see Rita BEFORE electrolysis, catch her in a bit part as, naturally enough, a dancer, in CHARLIE CHAN IN EGYPT.)

The author also covers the lives of several actors. (you can hop, skip or jump through those depending on your mood - I simply have no interest in Loretta Young or, really, for that matter, Eleanor Powell. Though I liked Powell more than Young.) The studios then had thriving public relations units which concentrated on keeping stars and their personal idiosyncrasies looking neat and clean and appealing - occasionally failing spectacularly, as in the case of Lana Turner whose messy personal life (grimly laughable in its extremes) was a trial and tribulation to all involved. But this isn't a book about gossip. So there aren't very many juicy revelations and there is little or no mention of certain stars' sexual preferences. Though of course it doesn't stop us from wondering.

These people worked feverishly day to day, making believe, pretending emotions, having little free time to develop their own personalities and or live a 'normal' sort of life, it's no wonder some of them crashed and burned. Very few of these actors were able to break free from the prevailing system (though Deanna Durbin was one who did so successfully), hence the excess drinking, drugs and sloppy love lives I suppose. Though those excesses don't seem to have changed much, judging by the personal lives of today's actors.

In comparison to the one or two films a year working schedule of most major actors today, the old routine of movies churned out every few months is startling. Actors signed on for seven year stints then and as employees of the studio (glamorous employees, yes, but employees none the less) did what they were told. (Well, most of them did, at any rate. It was later when some of them balked that the system began to fall apart.) In the 30's through the 50's, studios churned out films on a regularly scheduled basis. These huge operations had the necessary mechanisms in place to shoot movies concurrently, lot to lot, soundstage to soundstage, shuffling actors back and forth. It is amazing to me, how many of these movies went on to become classics, considering how quickly some of them came together. But I suppose when you have a concentration of genius, talent, artistic intelligence and artistry all toiling away in a concentrated hothouse atmosphere, there were bound to be some spectacular results.

On the whole, this is a very engaging book about a time in movie making history that will never come again. I recommend THE STAR MACHINE for those of us who are nutty about old movies and consider too much information never enough. If you know what I mean.