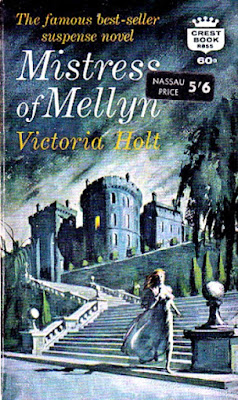 "There are two courses open to a gentlewoman when she finds herself in penurious circumstances," my Aunt Adelaide had said. "One is to marry, and the other is to find a post in keeping with her gentility."

I know, I know, similar in cadence to the beginning paragraph of PRIDE AND PREJUDICE, but nicely done just the same. For it tells you right away (in case you hadn't noticed the cover of a woman in her nighty running away from a mysterious castle/house) that you are in for a specific sort of book. And that is exactly the delight I take in gothic romances - that they are, indeed, a specific sort of book.

Even though I rarely read them anymore (except as rereads) I still have very fond memories of discovering the genre for myself many MANY years ago after finishing JANE EYRE and looking around for something in a similar vein. Oh yes, JANE EYRE was the first and remains the finest example of the style. Had she but known she was formulating a genre or, at least, a style of story telling, I wonder how Charlotte Bronte would have felt about it all. There's lots of the 'had she but known' thing going on in gothic story-telling, so who knows.

But Bronte owns the responsibility of having created the two essentials of the gothic romance: the penurious, strong-willed but shy and soft spoken plain-jane heroine forced to earn a living and the tall, willful, craggy-handsome hero with regrets and a bad first marriage.

I feel comfortable in saying that MISTRESS OF MELLYN will turn you into a gothic romance reader (if you aren't one already) especially if you happen to stumble across it at just the right time in your life. Of course it helps if you have already read JANE EYRE and are willing to be further enticed by romantic gloom and doom - not that Holt is the writer Bronte was, of course. But she knows how to create the necessary sinister ambience and has the knack for making her heroines likable and her heroes enigmatic.

An intelligent heroine is a given, but the key is the hero: he must never come off as a dark-browed jerk who poses in riding pants and cracks a whip. And he must always, ALWAYS be nursing a broken heart that is aching to be mended by the right sort of woman. AND most importantly, he must not be a brute. AND even if he once was, he must have gotten over it by the time the heroine comes into his life.

Gothic Romance is a phase many of us go through - mine lasted for many years and I'm happy enough now and then to revisit my favorites. I actually own a paperback copy of MISTRESS OF MELLYN as well as the hardcover (though not the first edition). It's one of those books that sort of refuses to go away.

The heroine is Martha Leigh (aka Marty to friends and family), a brave, intelligent, stalwart, plain-spoken spinster who has given up on ever having a husband. Truth is she is just too outspoken and, of course, not beautiful enough to attract a 19th century male. (Little does she know.) We first meet her as she travels to Mellyn, an eerie mansion on the Cornish coast of England. There she will be taking on the job of governess to a young headstrong girl named Alvean (she has vanquished three other governesses), at a lonely estate full of secrets. Her brooding employer, Con TreMellyn, is a handsome but stiff-necked country gentleman who has never gotten over the fact that his first wife ran off and left him and their daughter. He is not a happy man and has the money to indulge his unhappiness.

Enter Miss Leigh, the diffident red-haired governess. She almost immediately piques TreMellyn's interest, of course. That is a requisite for this sort of tale. But this interest manifests itself as annoyance, even anger.

Unaware (she's not worldly), Miss Leigh settles into her routine and begins making headway with the difficult young girl. Almost from the beginning though, she can't help but sense menace lurking within the walls of the huge house. There is something about the place that disturbs her and as she grows to like her charge and even to admire her employer, she realizes that unless the family's secrets are vanquished, Alvean's happiness (much less her father's) can never be realized.

That's always the way of course and what else is a poor inquisitive governess to do but get involved, risking life, limb and sanity.

In the end, there is a horrifying revelation as the truth finally dawns on all concerned but not before poor Miss Leigh almost pays for it with her life.

Motivation for the truly dark deeds is a bit thin, but other than that, this is a wonderful story told exceedingly well by a terrific writer who truly understands the name of the game. Holt (a pseudonym for Eleanor Hibbert) went on to write dozens of books in this genre, several of them quite memorable. Another off the top of my head: KIRKLAND REVELS.

Since it's Friday, don't forget to check in on author Patricia Abbott's blog, Pattinase, to see what other forgotten or overlooked books other bloggers are talking about today.