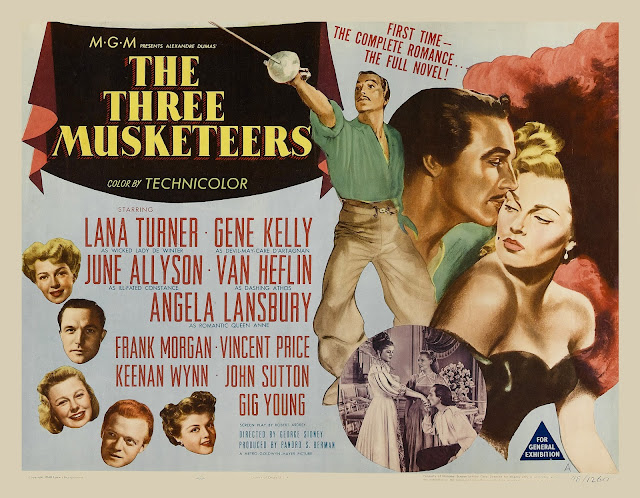 I don't do forgotten films much anymore primarily because most of the movies I wanted to write about I've already written about (or forgotten), if you know what I mean. Plus I don't have a television anymore so it seems that TCM movies are, for me, a dream of the past. Still, now and then I remember a movie that somehow I'd overlooked and so here I am today, writing about an old favorite of mine. 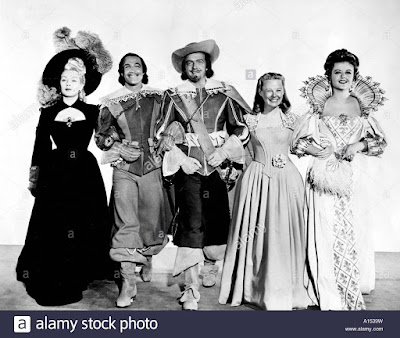 Lana Turner, Gene Kelly, Van Heflin, June Allyson and Angela Lansbury. La Turner looks as if she was added to the shot at some later time.

Haven't seen THE THREE MUSKETEERS in a while but it's one of those films that stays vividly in memory even for those of us whose memory is, shall we say, not exactly sparkling fresh.

When MGM (and Technicolor) was in its heyday no one could touch it for sheer over-the-top 'artistic' exuberance. Colorful extravaganzas were the studio's meat and potatoes. Even in memory, the brightness of the color stands out almost like a separate entity. Not to mention the costumes, the California scenery (mostly greenery filled studio backlots), the lively sound effects and music. And oh, yes, the actors.

You might not think so, but Gene Kelly makes a splendid D'Artagnan. Not my idea of a Frenchman, but hey, nobody's perfect. And he doesn't even have to dance in this one, except that he's so gracefully athletic and so energetic (willing to sling and swirl his body around the screen as no other actor I've ever seen then or since) that it's almost as if he's dancing anyway - just watching him move is a joy, not to mention his fencing, dueling, riding or whatever. Just a sheer manly delight. 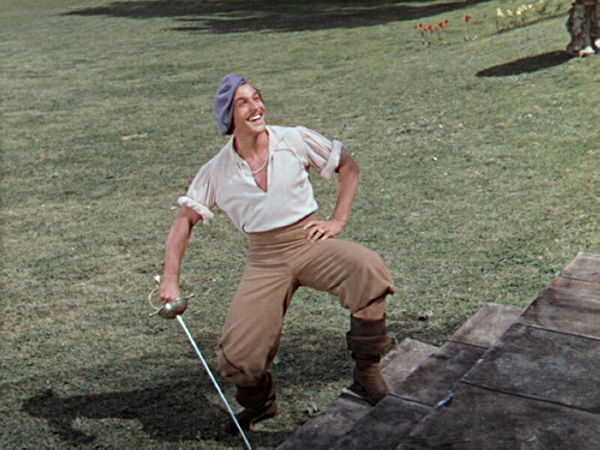 Celebrated director George Sidney doesn't tamp down the flash since obviously he was of a mind that the more frenetic activity the better.

Based on the Alexander Dumas book (this time with screenplay by Robert Ardrey), THE THREE MUSKETEERS has been filmed many times over many years with many different actors in the cast, all with varying degrees of success. (Even the Ritz Brothers got into the mix at one point, not to mention cartoon duo Tom and Jerry.) However, this MGM version remains my favorite. Simply because it doesn't try in the least little bit to be realistic - even if there is a cruel murder in a castle prison. (And that particular scene, when it happens, seems to be happening in a different film.) Still, it works somehow because Lana Turner is really quite superb in her evilness. So evil that she is even photographed without make-up. Well, as 'without make-up' as MGM got, at any rate. Even then, she is exquisitely beautiful - especially when praying.

Oh yeah and there's a matter of the chopping off of a certain head near the end - but not to worry you don't see anything gory - just a very VERY chilling scene vibrating with portentous drama and nice costumes as two figures walk away into the sunset - one to return, one not. 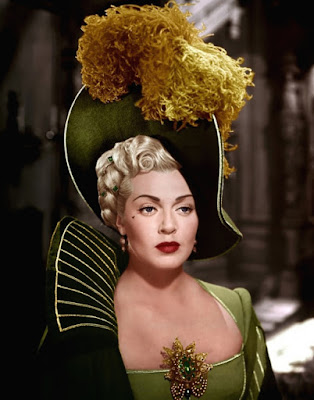 Ah, the costumes (this time by Walter Plunkett). They take your breath away. Lana Turner, especially, as the villainous Lady De Winter who is in cahoots with the equally villainous Cardinal Richelieu (Vincent Price) and  struts around in gorgeous satins and feathery overkill (She, not he. Though he looks pretty spiffy in red satin robes.). 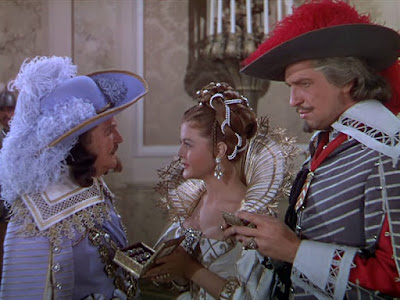 Frank Morgan as the nincompoop King Louis XIII, Angela Lansbury as his intelligent but none too heart-wise Queen and Vincent Price as the always disagreeable Cardinal Richelieu.

And Angela Lansbury as the Queen looks every bit the way a queen should look - regal and majestic even when cheating on her hubby, the King. (The plot hinges on those pesky diamond studs given her by the king and passed on by her to her special 'friend', the Duke of Buckingham (played elegantly by John Sutton). 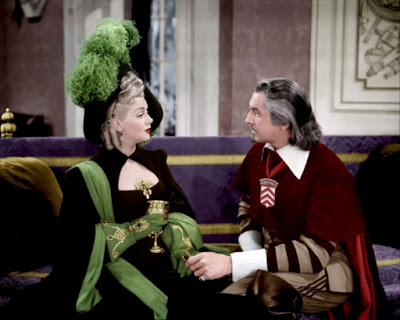 Lana the glamorous and Vincent the vile, plotting their evil deeds.

Said diamonds must then (to save the Queen's reputation) be returned and just in the very nick of time delivered to the Queen to wear in time for the King to see them being worn at a grand court event. Phew! Lots of running back and forth between England and France. 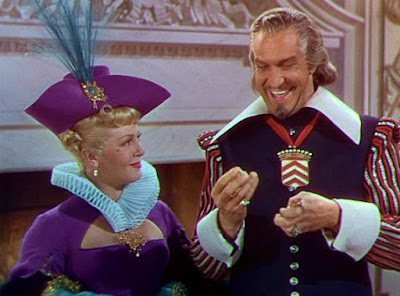 And lots of attempts by the bad guys to stop the good guys from carrying out their appointed task. I know, makes little sense, but what the heck - the Musketeers to the rescue. A QUEEN'S REPUTATION IS AT STAKE!! Remember when reputations meant something? Ah, the good old days. 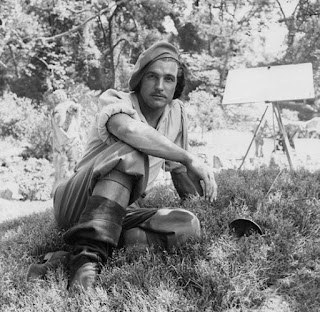 In the beginning, D'Artagnan (Gene Kelly) shows up as a country bumpkin (complete with beret) set on making his way in the world, namely joining the Crown's musketeers and cutting a swash and buckle swath in Paris. (I believe his father had been a musketeer but not sure). By chance he meets up with Athos (Van Heflin), Porthos (Gig Young) and Aramis (Robert Coote) and before you can say, 'All for one and one for all!', he's proven himself with some well-timed rough and tumble swordplay. 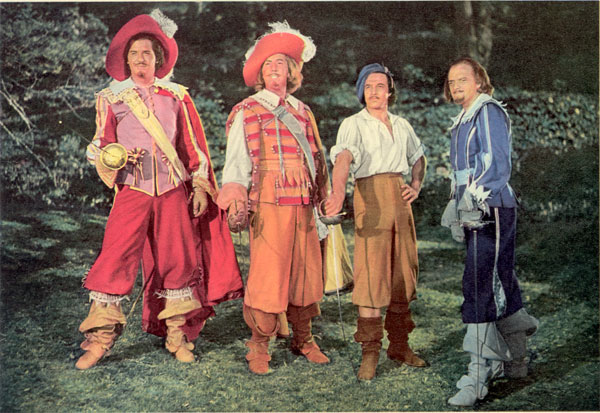 Soon he's hanging out with the three musketeers (of the title), getting the lay of the land, learning the ins and outs of court life, the difference between friend and foe, the tricks of giving and/or not giving offense, and meeting and falling for the sugary sweet Lady Constance (June Allyson), the Queen's lady in waiting. And let's not forget, that he later gets embroiled in a plot to rid the King of the Queen's steadying influence and garner even more power for Richelieu.

Phew! Lots for an ambitious country boy to take in. But he's willing and able and off we go.

Of the regulation musketeers, Van Heflin as Portos is the anguished one. Well, that's because he carries heavy baggage and a cruelly broken heart. Athos (Gig Young) is the twinkly-eyed one, a dandy for the ladies. And Aramis (Robert Coote) is the older, boisterous one who's seen it all and probably done it too.

They take to D'Artagnan like ducks to water, and soon they're Three Musketeers + One, in search of a lark worthy of their talents. 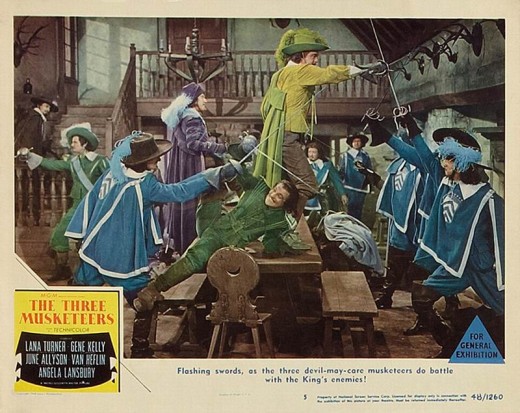 Lots of fun to be had with this version, lots of visual firecrackers (you know what MGM was in those days) and lots of stars at the height of their allure. Though Price was older by this time, he was still, in a vile and evil way, alluring.

Good movie. It's a wonder to me that Neflix hasn't bought the MGM vault. But that's probably because somebody else has. Maybe Turner? I wish TCM had a streaming service. Surprised no one's thought of it.