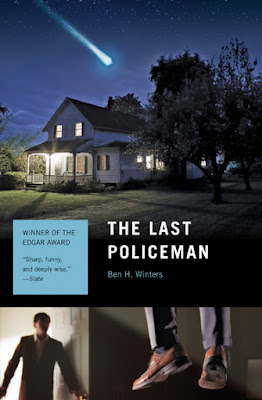 Now would not seem the time for reading dystopian novels set in an alternate USA, but what the heck. Live dangerously, I say.

The Edgar Award winning novel, THE LAST POLICEMAN, by Ben H. Winters is the first in a trilogy (brought the second and third installments home from the library tonight) and though the subject matter is dicey, I was utterly fascinated and had trouble putting the book down - I know, I know, I always say that about books I enjoy. But terrific writing glued me to the page. I was also riveted by the intriguing concept.

If the definitive end of the world were near, would you bother to keep your normal day to day routine? Would you stay on the job? Do the job? Would any of it matter? OR would you take the 'easy' way out?

The setting is Concord, New Hampshire. There, Henry (aka, Hank) Palace, a newly promoted detective in a dwindling force (most have retired or simply walked away from the job) is determined to solve a case even while faced with the upcoming end of the world. Literally.

Hank is a native Concordian (is that the way you'd say it?), young, gangly and very, very tall. So much so that everyone has to comment. Though I wouldn't say that six feet four or five is THAT tall, but maybe in New Hampshire. He is an engaging, even endearing character who is determined to make his life count, determined to do the right thing even when faced with insurmountable odds.

And the odds are spectacular.

Earth is on its final countdown. A giant meteorite is directly headed our way and the world and most everything on it has six months to live. As you might imagine, societal barriers are in break-down mode. Day to day living is wobbly at best. Gallows humor is the norm. Suicide has become a routine death. Religious zealotry confronts one on every street corner. World economies have tanked. Conspiracy theorists run amok. Governments rally to strengthen their control and keep the populace from panicking.

No one cares about the suicide of Peter Zell, a hapless insurance actuary who hangs himself in the bathroom at a MacDonald's. (Well, a copy-cat MacDonald's, since that and most other fast food chains have all gone out of business - what, no Starbucks?)

But did Zell really hang himself?

Hank Palace thinks not. But since the three other cops left in his division don't care to detect anymore, it's up to Hank to solve what might be a murder in disguise. AND it is also up to him to keep tabs on his clinging sister, Nico, who is apparently willing to put up with her dolt of a hubby even if he is currently in jail, branded a terrorist.

This lively, fast-moving tale is probably meant for those of us who may not normally enjoy dystopian views of the world, even in fiction (I am not a fan of HUNGER GAMES or any of its ilk) but who do like a good detective yarn with some extra fireworks thrown in. Somehow THE LAST POLICEMAN breaks down all barriers. Resistance is futile. The main character is the first lure, terrific writing is the second. And even the inevitable world ending scenario didn't dim my enthusiasm. Probably because Winters is not a hysterically inclined writer - his page by page exposition of life nearing the end, is rather matter-of-fact and utterly believable.

I would have given this five stars except for a couple of things in the final denouement which I found a bit confusing. (Hank does do a bit of stumbling around.) That is, the way that he finally figures out who the murderer is - the reasoning seems a bit clunky. But other than that, this is a super-duper, first rate book, highly recommended by yours truly. Can't wait to read the next two.

It's Friday, so don't forget to check in at author Patricia Abbott's blog, Pattinase, to see what other forgotten or overlooked books other bloggers are talking about today.