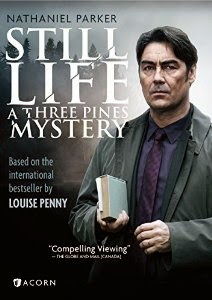 I wasn't going to post about this at all, but what the heck, I feel the need to vent.

Imagine my delighted surprise when I found that Louise Penny's excellent debut, STILL LIFE, an Inspector Armand Gamache novel - first in the award winning series beloved by everyone - had been filmed for television.

Nathanial Parker of Inspector Lynley television fame, (Parker starred in the series based on the books by Elizabeth George) is not my idea of Gamache certainly, but I thought well, let's see what he does with it. Casting-wise, I would have preferred Colin Firth (if it had been made into a theatrical release, that is) or, at least, someone of that physical heft and presence.

Anyway, imagine my surprise when this made for television botch-up (in what I hope will NOT be a series, at least until they get their act together) was revealed to me in all its dismal ineptitude.

How could anyone go so wrong with so much fertile original material to work with? (I know, I know, asked and dubiously answered a million times over many years of film adaptations gone disastrously wrong.)

STILL LIFE - A Three Pines Mystery - What the heck happened?

Much of the fault has to go to the director. To begin with, Peter Moss seems not to have any idea of how to build suspense other than by standard run-of-the-mill stock shots. The scene set-ups and lead-ins are ineffectual - almost as if no one had any clue how to go about it - worst of all, THERE IS ZERO ATMOSPHERE - benign, menacing or otherwise. And the choppy pedestrian editing adds NOTHING to the mix. When all else fails, they rely on yet another aerial view of leafy fall foliage.

Most confusing is the inept murder build-up and attack on a well-liked villager, a 'naive' artist whose demise is mourned by all. The woman is shot by an arrow but there is NO arrow in the wound even at the moment of attack. WHERE did it go? Maybe it was an invisible arrow. This scene should definitely not have been filmed at point blank range because later, when the arrow theory is placed before us, we wouldn't have to sit there and go, 'huh'?

And near the end when a magnificent living room mural is key to motivation and a previous murder, said mural is barely shown to us at all except in bits and pieces and not very illuminating bits and pieces at that. This was a pivotal moment in the story and should have been filmed in a manner which caught the viewer up in the wonderful work of art. A work of art which, for various reasons, the victim had long kept hidden away from friends and fellow artists. As filmed by Peter Moss, the whole thing just falls flat.

And by the way, a word to the wise:

When filming a murder mystery in which the victim lives alone and has a dog (or for that matter a cat), it is most distracting not to know what happens to the dog or cat left behind at the house once the dead person is carted off to the morgue.

Not a thing that occurs in the murder aftermath in these sorts of mysteries matters as much to animal lovers who will be bothered if no one seems to be concerned that a pet has lost its owner. It would only take a comment or two to settle our minds as to the fate of said pet.

In this particular instance, showing the dog much later being walked by the victim's friend comes just at the moment when I began to think they'd left the animal to starve to death. VERY unsettling. Yes, I worry about these things.

By the way, this also applies to books in which the victim lives alone with a pet.

Nathanial Parker is all right (I really like him so I'm giving him a bit of a pass) in the pivotal role of Armand Gamache - he affects an odd low-key staccato voice, speaking in English. (The series is based in a small, colorful and hard-to-find village more-or-less outside of Montreal, in the Canadian Province of Quebec) When called upon to speak a few bits of French, Parker's accent, I thought, was excellent though of course I'm not French and what do I know - it sounded good.

But the cast surrounding Parker is so woeful (except for Deborah Grover as the cranky poet, Ruth Zardo) as to be almost laughable. Nothing engaging or interesting about any of them.

As for the writing:

The plotting didn't remind me in any way of the book I'd read and one of the characters (a female cop) is so annoyingly written and played that I was forced to fast forward her scenes (don't remember this person from the book but that's not saying too much, what with my old lady memory and all).

And oh, by the way, where was Madame Gamache in all this? Or at least a mention of the fact that Gamache is married and away from home and hearth. (A phone call would have taken care of this quickly and efficiently.)

A little about the books:

Louise Penny's ingenious mysteries are wonderfully conceptualized with a particular, distinctive style and flavor. The stories mainly revolve around the characters' emotional lives (including Gamache), but they also feature a very specific sense of place. I read the first three or four books, but lost track when I veered off in another reading direction. (That happens sometimes.) I've always meant to go back to Three Pines. (This is a series that probably needs to be read in order.) Maybe this winter I'll set aside a chunk of time.

Those of you familiar with the books will know that Three Pines is a very special place, a kind of 'magical' setting, an out of the way refuge for artists, writers and eccentrics galore (the fact that it also appears to be the murder capital of Canada is merely an odd coincidence). The village is uniquely peopled with the enigmatic and the unconventional, it has a haunting beauty which lures Gamache and settles into his consciousness as he works to solve some very human (and often bizarre) mysteries. (Occasionally a crime does take place away from the village. But never too, too far away.)

NOTHING of Louise Penny's Three Pines is apparent in this amateurishly filmed version. Nothing. The town used as a setting is no different and no more intriguing than any one of an assortment of pretty upper New York State, Vermont, New Hampshire or Canadian towns. NOR is any of it photographed in any meaningful or imaginative way. Lots of helicopter shots of colorful trees do not a special place make. The film-makers might just as well have inserted a standard travelogue in between scenes, perhaps that would have added more of a Quebec atmosphere.

Oddly enough, the finished product somehow has the look and feel of adaptations done in the 1980's for American television consumption.

If you've seen STILL LIFE: A Three Pines Mystery and formed an opinion, I'd love to hear from you. Am I in the wrong? Do you agree or disagree? Can we commiserate?

P.S. I didn't make it to the bitter the end, I'm just not that much of a masochist - was there something there that I missed? Something that might possibly have made up for the dismal abyss of everything that went before?

I'm willing to listen. But it will take a lot of convincing.

Don't forget to check in at Todd Mason's blog, Sweet Freedom, to see what other Forgotten and/or Overlooked Films, Television or other Audio/Visuals other bloggers are talking about today.