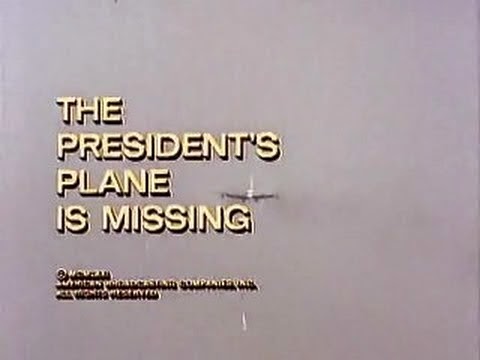 Is it me or did all men look smarmy and sweaty in the 70's? I ought to remember since I lived through those years, but I suppose in real life they didn't look as bad as they do on screen. It's just that in films of that era, everyone looks as if they need a shower. Maybe it was just the haircuts and the synthetic fibers, and the type of film used. Made for television movies were much different then than they are today.

Actually, the only one in this cast who looks as if he might currently walk down the street and not cause a sartorial stir is Raymond Massey whose grooming and tailoring are impeccable.

It's a wonder to me how films from the 40's (and even the late 30's) manage to look better than anything done in the 60's and 70's. Were the fashions and hair styles really that dreadful?

I suppose they must have been.

But that's not what I want to write about.

To my surprise, THE PRESIDENT'S PLANE IS MISSING isn't a bad film at all. Directed in a pedestrian way by Daryl Duke, it still manages moments of suspense and bits of insider intrigue. I watched it merely because of the title and because I vaguely knew that the screenplay was based on a novel by Robert J. Serling which someone had mentioned as being pretty good.

A truculent Chinese government is waving their missiles around and a confrontation between us and them seems likely. Washington is tense, the country is tenser. On the eve of a possible show-down, President Jeremy Haines (Tod Andrews) decides to take a trip.

When Air Force One crashes in the Arizona desert all on board are presumed dead and Washington, the press and the country are thrown into a tizzy. The Vice President, a hapless and underwhelming character named Kermit Madigan (Buddy Ebsen) is reluctant to take the oath. The President had failed to brief him on his intentions, re: the Chinese, and he is completely at the mercy of an unscrupulous White House operative (Rip Torn) who is urging him to take aggressive action. Though the Secretary of State Freeman Sharkey (Raymond Massey), the President's closest adviser, counsels strongly against it.

In the meantime, Mark Jones (Peter Graves) a reporter for a wire service suspects that the President isn't really dead but caught up in some conspiracy. He decides to dig around helped by his boss, Gunther Damon (Arthur Kennedy) who is reluctant to believe that anyone connected to the President would conspire in such a plot.

The acting is basic 1970's, as is the general tone of things and the view of the world. Even so, the result is a dandy little political thriller without many bells and whistles, but intriguing enough to pass the time if you, like me, enjoy these sorts of things.

(I read online that the film was actually finished in 1971 but that it was held up because of President Nixon's trip to China.)

Don't forget to check in at Todd Mason's blog, Sweet Freedom, to see what forgotten or overlooked films, television or other audio/visuals, other bloggers are talking about today.