As the title to this post would suggest, I'm currently re-reading a few of my early copies of Aaron Elkins' Gideon Oliver books and my memory being what it is, it's almost like reading them again for the first time. You know how that goes. At any rate, if you're not familiar with the Oliver books, I'm here to recommend them all over again because it seems to me I've probably recommended them before and far as I'm concerned, you can't recommend good books enough. 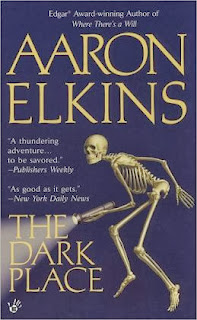 Gideon Oliver is a forensic anthropologist - nicknamed 'The Skeleton Detective' by an over-reaching reporter - who seems always to be on call when bones turn up that need explanation. Since most of these bones herald a heretofore unbeknownst crime scene, we know immediately we're in for another terrific anthropological mystery in just about any corner of the world - Gideon Oliver travels a lot. Usually by his side is his wife Julie, a Washington State park ranger whom he met in THE DARK PLACE, published in 1983 and is currently being re-read by yours truly.

I've just finished MURDER IN THE QUEEN'S ARMES which takes place during Gideon and Julie's honeymoon trip to England and is one of the best books in this long-running series of excellent mysteries featuring exotic (well, exotic to me, anyway) locales, intriguing crime scenes, interesting characters (who knew that skulduggery ran rampant among the the anthropological elite?), not to mention bits and pieces of skeleton minutiae which I find fascinating. 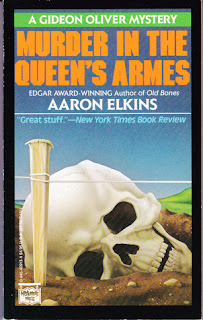 There's always a whodunit aspect to the stories which make them a unique combo of mystery and thriller with enough cozy aspects to round off the edges, though plenty of action takes place center stage. In MURDER IN THE QUEEN'S ARMES, there is a harrowing (and I mean harrowing) altercation with a 'hound of the Baskervilles' type dog from hell (improbably named 'Bowser') who has been loosed upon the honeymoon couple in the dark of night.

I'm not reading the books in any sort of order,  just picking through the shelves and seeing what calls out to me. There's one that takes place in Mont St. Michel, France which I'm currently looking for - I think I have the hard cover. That's probably next up.

Author Aaron Elkins infuses his main characters with just the right touch of humor and enough believable traits so that opening the pages of a Gideon Oliver book is like heading off on an exciting adventure with a friend who is not only intelligent and happens to have a most interesting profession, but is very good company as well.

There are 17 books in the Oliver series and I've read most of them at least once. What have I re-read so far?