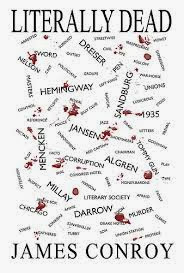 I'm not sure about the actual publishing date of this very entertaining book by James Conroy because the copyright page is a bit convoluted - the wording isn't what I'm used to. Plus Knox Publishing seems to be a British publishing concern. I only stumbled over LITERALLY DEAD this year and had gotten the impression that is was a relatively new book. But it might be a re-issue. The inside page says that Conroy 'asserted' his rights in 1988, so - who knows?

At any rate, this was a happy surprise for me since I'd never heard of the author or the book prior to this year. (I read it about a month ago.) The main thing I loved about LITERALLY DEAD is how adroitly the author spins a tale of an evil empire (in this case a viscerally corrupt Chicago) coming down full force on an innocent guy who is only attempting to get along, do his job, write a book and stop thinking about the death of his dad at the hands of union goons (or maybe Communist thugs) a few years before. I know very little about Chicago history, especially during this era and the subject matter (fear and unrest among workers, the lure of the Communists, police corruption and brutality), but had no trouble following the author's lead.

Some familiar names will pop up in the story, since it appears that Chicago was not only teeming with crooked cops and politicos, but also with literary greats whom Amos Jansen (our hero) is fortunate enough to be able to turn to for help.

Amos is a would-be writer, but his day job is as a clerk at a Chicago literary society. His mentor is the society's wise and kindly vice-chairman who is about to be murdered. (He has been collecting evidence in writing of some very nasty doings by the city's cops and mucky-mucks.) It is 1935 and Amos is happy enough to actually have a job. He has a wife whom he adores (she has a minor job with the city) and his best friend is writer and general screw-up Nelson Algren. That Amos is about to be embroiled in murder and chicanery he has no clue.

Ernest Hemingway and I met in the spring of 1935. "April is the cruelest month," a fellow expatriate of his wrote. Hemingway's train from New York was three hours late. Chill rain was falling in Chicago on its arrival. America was in its sixth year of Depression. All that and, to be blunt, the man considered by many as the greatest living prose stylist was just plain pissed about everything.

I recognized him immediately. Broad, large head, bushy mustache, high forehead, and immense eyes were right off the dust jackets of his books. But his mouth was different. I had seen it photographed clenched as he typed. Crinkled with private irony in pictures from the Twenties. Even smiling over a kudu carcass he'd bagged on safari. On the platform of Union Station that mouth was curled in the most malevolent sneer I ever encountered.

"Welcome to Chicago, Mister Hemingway," I greeted him.

"I'm from Chicago, you little scat. Take this," he barked thrusting his valise at me.

Hemingway is in the windy city to give a lecture which has been arranged by the society Amos works for. The surly writer wants also to make sure he gets paid, sooner rather than later, so he can be on his way back to Florida (where, on a fishing expedition he has apparently shot himself in the leg). He takes a liking to Amos and so begins a friendship that, as defined by the author, appears largely plausible. It is through Hemingway that Amos will meet other literary greats and even more importantly, one Chicago legal super-great: Clarence Darrow.

Synopsis from the back cover:

In the midst of the Great Depression, one man must do battle against corruption with nothing but his wits and a host of great literary figures...

Amos Jansen is merely a clerk. He is not a crime fighter, the next great writer, or a man of privilege. He is the humble employee of a Chicago literary society. That is, until he is arrested for murder.

The scapegoat of a perfidious lieutenant, Jansen stands wrongly accused while his idols rally around him. Literary personalities the likes of Ernest Hemingway, Carl Sandburg, Edna St. Vincent Millay, Nelson Algren, and H.L. Mencken, as well as civil liberties war-horse Clarence Darrow, join Amos in his search for the real murderer of both the society's vice-chairman and his own father.

Will the pen prove mightier than the pistol?...

Yeah, I was hooked.

And continue to be surprised that I'd never heard of this. Though there are a few clunky 'first book' bits here and there, it's mostly a terrific story told with humor and style and not requiring much suspension of disbelief. You say to yourself, yeah, it could have happened. Besides, Amos is a nice, unassuming, likable chap - the sort of nebishy hero I like - a hapless sort who comes through when the chips are down. I also liked Nelson Algren as his scruffy pal, a guy who can't seem to stay out of trouble (he had spent time in jail) but did go on (in reality) to have a long-lived writing career (among his books: THE MAN WITH THE GOLDEN ARM).

LITERALLY DEAD is a book I'm happy to recommend - one of the nicer reading surprises of 2013.

Since it's Friday, don't forget to check in at Patti Abbott's blog, Pattinase, to see what other forgotten or overlooked books other bloggers are talking about today.