Friday Forgotten (or Overlooked) Book: THEY CAME TO BAGHDAD (1951) by Agatha Christie 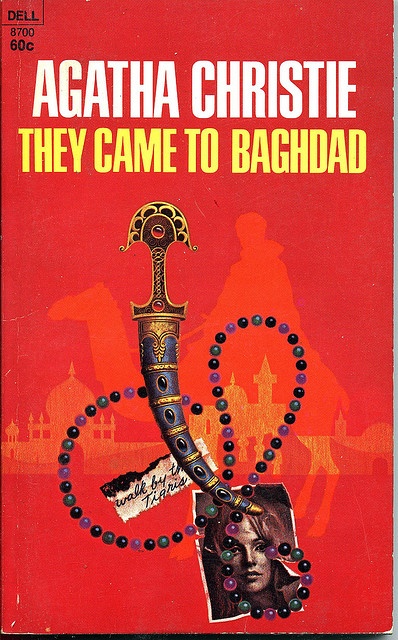 Not forgotten and not too overlooked and not my first time writing about this book and probably not my last.

I've read THEY CAME TO BAGHDAD about twenty or so times over the many years since I first began reading Christie as a teenager, and am currently re-reading it for the 21st time - not that I've kept count. This book is like an old friend whose company is very comforting. And who doesn't need comforting these days.


Whose books do I turn to when things get gloomy ? Well, certainly Agatha Christie is at the top of the list. She writes about a world mostly long gone, a world in which the bad guy always got his or her just desserts and if everyone didn't live happily ever after, at least they lived comfortably.

If you would like some serious criticism or museum quality breakdowns of Christie's work, you won't find it here.There are worthy bloggers online who will spend a great deal of time dissecting Christie, comparing her to other Golden Age authors, often bemoaning her 'lack' of deep characterization (totally wrong-headed far as I'm concerned Christie does characterization very well with just a few broad strokes), while wishing she had done more of this or more of that, fitting her work into this that or the other timeline while separating her best writing years from her not so great - I don't do that. Not that there's anything wrong with it, but, just - I don't do that. I enjoy Christie for what she can do, which is genius.

THEY CAME TO BAGHDAD is one of Dame Agatha's stand-alone books, a thriller basically, with aspects of the mystery mixed in. There is no Poirot and no Jane Marple to solve the case. So perhaps I would not pick this as my first entry into Christie-land. Still, it is her best stand-alone I think, next to THE MAN IN THE BROWN SUIT with which it shares some similarities. In truth, I often get the two books confused in memory. But since they're both my favorites, I just shrug it off. Once I pick up the book and begin reading, it all sorts itself out.

The story begins leisurely enough with the reader meeting several people who will later play key roles. Lots of books begin this way but not as many do it so well as Christie. Uh-oh, would you consider that a comparison? Forgive me.


An enormously important international conference is to be held in Baghdad. Various world-wide national delegations are converging on the fabled city, including a couple of Presidents and a Prime Minister or two - naturally everyone is anxious to avoid catastrophe. What the meeting is about, Christie never makes really clear, but it hardly matters as long as we understand that it is of most importance to the future of post-war World Peace.


Anyway, the book contains one of my favorite opening sentences:


Captain Crosbie came out of the bank with the pleased air of one who has cashed a cheque and has discovered that there is just a little more in his account than he thought there was.


I also love this description:


Captain Crosbie often looked pleased with himself. He was that kind of man. In figure he was short and stocky, with rather a red face and a bristling military moustache. He strutted a little when he walked. His clothes were, perhaps, just a trifle loud, and he was fond of a good story. He was popular among men. A cheerful man, commonplace but kindly, unmarried. Nothing remarkable about him. There are heaps of Crosbies in the East.


This is even more telling when we learn, several paragraphs later, that Crosbie's is an assumed persona since he is an undercover agent, a spy. Then we learn that Mr. Dakin, a slovenly, sloop shouldered, ineffectual man whom everyone disregards, is in, actuality, the strutting Crosbie's boss. These two characters have a very interesting opening conversation which sets the book in motion. Exposition, yes, but again, done very well.


From these two we learn that, Henry Carmichael, one of their more important operatives, a brilliant, enigmatic and canny young man of many faces and many languages, has discovered something of paramount importance to be revealed (if he makes it) at the meeting in Baghdad. Carmichael is, at the moment, in disguise as a Bedouin traveller (he speaks all the necessary languages and dialects) attempting to make his way from the mountains into Baghdad. But the enemy is onto him and already several men who had the misfortune to look like Carmichael have been indiscriminately killed in and around the city. It will be a miracle if Carmichael makes it as far as the embassy.


What this important 'thing' is is proof of a nefarious conspiracy to destabilize world peace. This 'thing' is, in truth, what Alfred Hitchcock called, "a mcguffin," a mysterious something everyone wants which sets a story in motion. In her books, Christie was occasionally fond of chatting about the 'real' source of world influence - the power behind the scenes: money. Shadowy money men who helped push the world one way or another, instigating wars and unrest if need be. She uses this idea in several of her books either as guiding light or as reason enough for murder and mayhem.

"...The upshot is that somewhere a third group of people whose aim is as yet obscure, are fomenting strife and misunderstanding and are engaging in cleverly camouflaged money and jewel transactions for their own ends. We have reason to believe that in every country there are agents of this group, some established there many years ago. Some are in very high and responsible positions, others are playing humble parts, but all are working with one unknown end in view. In substance it is exactly like the Fifth Column activities at the beginning of the last war, only this time it is on a world wide scale."

Given today's immense and secret concentrations of money stashed in various countries and the dangerous sway this money has over governments, I can't help thinking that Christie was prescient.


There are two important women characters in THEY CAME TO BAGHDAD, one is our heroine and the other is Anna Scheele, the mysterious confidential secretary to an American tycoon. Scheele's secretly scheduled appearance at the conference in Baghdad sets several governments on edge since they are not quite sure what she - or more importantly, those she represents , are up to. Upon her arrival in London, of course, she is kept under surveillance by the British. How she slips away from them is a tribute to the intelligence of the character and her wily creator.


Finally, we have the heroine of the piece, Victoria Jones. An impressionable (and very inventive) young lady freshly out of a job when she meets a young man in the park, a young man conveniently travelling to Baghdad the next day to join up with a misguided cultural group bent on bringing (among other things) Shakespeare in translation to the Middle East. The group is a kind of non-profit literary peace corps run by an absent minded professor named Rathbone. Victoria's young man - whose name is Edward - regrets he can't stay in London to spend time with her, but may he have a picture before he leaves? Handily, he has a camera.


In a very short space of time and incredible as it may seem, the penniless Victoria does manage to get to Baghdad. Believing herself in love with Edward, thinking herself a Juliet to his Romeo, she arrives lacking a job or a place to stay. But not for long. Soon she is not only reunited with her young man and looking for a job at Rathbone's spurious literary establishment, The Olive Branch, but shortly she finds herself at the scene of a midnight murder.


Of course, it's all a romp, thrilling but confusing when Victoria is kidnapped and for some reason, the kidnappers dye her hair or when we follow Carmichael the spy on his perilous trek into the city, eventually winding up at Victoria's hotel in the middle of the night.

(Earlier I love how he  resorts to Morse Code using Arabic beads to alert a friend, as he plots a quick-witted escape from the waiting room at the British Embassy.)


On the night of the murder, Mr. Dakin, the heretofore very briefly mentioned spy master reappears at a most unusual moment and naturally enough offers Victoria a job spying. Finally, Victoria has paying work.


The plot is neatly woven by Christie, jumping in intrigue from Victoria, to the spies and back again. And just when you think you almost know what's going on, there's that kidnapping with curious beauty salon consequences. Then we're off to an archaeological dig (something Christie knows heaps about) then finally, we're whisked off to the international conference where Anna Scheele comes out of hiding and there's an assassination to be averted.


Phew! This is a Christie book that moves at breakneck speed, full of clever twists and turns and enhanced by a likeable heroine you can't help rooting for.

Just a terrific, unpretentious, fun-thriller which no one - thankfully - has yet succeeded in adapting.

It's Friday and Todd Mason is again doing hosting duties in place of author Patricia Abbott who is currently duking it out with a recalcitrant computer. So don't forget to check in at Todd's blog, Sweet Freedom, to see what other Forgotten or Overlooked Books other bloggers are talking about today. 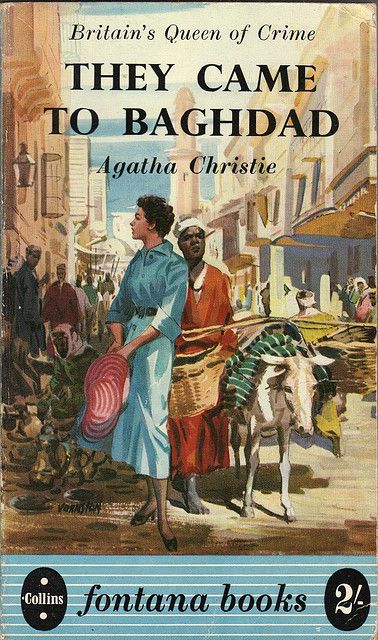