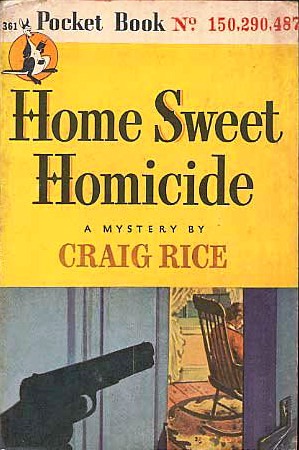 My first Craig Rice book and again I ask: what took me so long? My only excuse is that though I'd heard of Rice, I'd never come across her books either in the library or in bookstores and it's only lately that I've been hearing more about her writing AND all of a sudden I was able to cash in on a cache of Rice books on ebay for four bucks. I mean, was the universe giving me a nudge or what?

(P.S. Expect to see a couple more Craig Rice reviews down the line at some point. )

Craig Rice was the pseudonym of Georgiana Anne Randolph Craig. A prolific writer, she wrote under various names and ghost-wrote several mysteries purported to have been written by celebrities such as George Sanders and even, rumor has it, Gypsy Rose Lee. Several of Rice's books were turned into popular films.

At any rate, I'm just finishing up the delightful HOME SWEET HOMICIDE and I'm running late, so my review will likely not be posted until Friday afternoon.

Yes I know you're getting tired of me saying that this or that book is a 'delight' but I can't help it. Lately I've just lucked out in the 'delight' department.

A lovely suburban murder is about to take place (well, not so lovely for the victim) in the California country-side and we are about to meet the Carstairs family who will be right in the thick of things.

Of course HOME SWEET HOMICIDE depends on your tolerance of young kids (two clever and self-sufficient sisters and an ingenious younger brother) solving a murder while their mother, a mystery writer, works in a trance-like state on her latest manuscript. Marian Carstairs is a charming widow who likes to sing railroad ditties and has time for nothing but writing, writing, writing - you know where this is headed - right? Yep, there's a handsome police detective about to enter the picture.

The kids are on the scene one afternoon when shots are fired in the Sanford house next door. Naturally, they are immediately eager to find out what's happened though it's pretty obvious from the screams (and their peeks through a window) that a body has been found - to their ghoulish delight. A young woman comes running out of the house and the kids immediately rush into action.

Almost on the spot they hatch a plot to solve the crime so that their mother gets the credit AND the resulting publicity. This, they reason, will help the sales of her books. Makes sense to me. The body next door turns out to be that of Mrs. Sanford. The screaming woman rushing from the house is a young actress suspected of hanky-panky with Mr. Sanford. The kids had conveniently seen two cars leaving the scene of the crime just moments before. They are besides themselves with curiosity. I mean, wouldn't you be?

As time is of the essence, they think nothing of concealing and desecrating evidence that should rightly be in the hands of the police. However, since the cops in this book are not especially competent, the kids get away with just about everything while their mom, oblivious (she didn't hear the shots above the clackity-clack of her typewriter), toils furiously to meet her deadline.

Teenager Dinah Carstairs and her slightly younger sister April, not to mention their brother Archie are 'innocently' underfoot as the police arrive and begin their investigation. They try to shoo the kids away but since they live next door that's kind of hard to manage - most especially on the night of their big party when the house is filled with kids running around while a 'treasure hunt' is in progress. I grew very fond of Archie's slightly disreputable group of friends, a bunch of little boys known as 'the Mob.'  They kind of reminded me of the gang of Scottish street boys so wonderfully created by John Buchan in the classic, HUNTINGTOWER.

As I mentioned, Marian Carstairs, the mother, is a distracted widow who tends to zone out when in the clutches of writing fever, but fortunately her children  have adapted to their mother's idiosyncrasies - she spends most of the day alone in a room slaving away - there but not there, if you know what I mean.  They willingly share household duties, such as making breakfast and dinner and general clean-up. Perfectly content and acclimated to their daily routine, they do occasionally wish their mother would meet someone and get married - she's been a widow for years and years.

Enter the hapless but handsome policeman, Bill Smith who happens to be fond of railroad ditties. (Coincidentally, one of Marian Carstair's fictional detectives is also named Bill Smith.) The kids think Smith would make a perfect hubby for their mom and vow to throw them together as much as possible while solving the murder. To that end, they will run rings around the two cops in charge of the case.

They also try to make sure that their mom always looks her best when there's a possibility of the handsome cop coming over to interrogate any of them. This is the 1940's when women still wore 'house coats' around the - well, the house - and Marian has an especially nice blue one. She also tucks a flower in her dark hair once in a while. Yep - Bill Smith is a goner.

Marian Carstairs...looked around the dinner table and counted her blessings. Three of them, to be exact. She sighed happily.

There was a fresh lace cloth on the candlelit dinner table, and a bowl of yellow roses in the center. The ham was marvelously tender and delicately spiced, the sweet potatoes swam in in a thick brown syrup, the corn muffins were scorching hot and light as thistledown. A highly successful experiment had been made in combining the salad.

April, the darling, had brought a glass of sherry upstairs before dinner and said such sweet, such appreciated things! "Mother you look so much prettier in your blue house coat." "Mother, let me fix your hair tonight. " "Mother, put some war paint on. We always like to see you looking schmooz-able." And finally, "Oh, Mother, let me put one of the pink roses in your mane."

Did anyone, ever, have such wonderful children? She gazed at them rapturously. So good, so clever, and so beautiful! Marian smiled at them all, and reproached herself for having had even the faintest and most secret suspicion of them...

..."Mother," April said brightly, "if a lady was found murdered in her own living room, and if a few minutes later a socko motion-picture star drove up and said she'd been invited to tea, and somebody had heard two shots fired but the lady  had only been shot once, and if her husband was missing and didn't have any alibi, but if neither the husband or the motion-picture star had been the person who dood it," she finally ran out of breath, gasped and finished, "who would you say did?"

"For the love of Mike!" Marian said in a startled voice. "Where have you been reading such trash?"

Archie giggled and bounced up and down on the sofa. "It isn't trash! he said loudly. "And we didn't read it. We saw it!"

"Archie!" Dinah said sternly. She turned to Mother and said, "It happened next door. This afternoon."

Marian Carstairs' eyes widened. Then she frowned. "Nonsense. I'm not going to fall for any of your tricks, not this time."

"Honest," April said. "It did happen. It's all in tonight's paper." She turned to Archie. "Get the paper. It's in the kitchen."

"I always have to do everything," Archie complained. He left.

"That's just it," April said. "Nobody knows. The police have some loonie-louie theory, but they're all wrong as usual."

Along the way the kids are not averse to making up stories for the benefit of the police and even, in the course of their 'investigation' hiding the main suspect, Mrs. Sanford's nearly hysterical husband, in the playhouse. And coincidentally they are on hand when the victim's lawyer and two neighbors show up and, by various subterfuges, try to get into the victim's house. It doesn't take much putting two and two together to come to the conclusion that Mrs. Sanford was in the blackmail business.

And as the story of Mrs. Sanford's nefarious dealings becomes clearer, the plot itself becomes murkier. And of course at one point the kids get to search the dead woman's house. A very convenient fire in the neighborhood distracts the cops at just the right moment for Dinah, April and Archie to do the searching and naturally, they find what everyone is looking for. Though how the cops overlooked it isn't explained.

When the second murder occurs, the kids are on hand to hear the shots fired then as well. But the body isn't found in the Sanford house, instead it shows up elsewhere. Lots of confusion. Lots of plot twists and turns and in the middle of it all, Mother completes her latest manuscript.There's even a spy in disguise whom Dinah ferrets out and of course, Mother's Day arrives and must be celebrated with bunches of roses from next door and in the nick of time, a kidnapping and murder from the past connects everything up just as...

My favorite character is Archie, the smallest Carstairs (I believe he's about 7 or 8)), smart, wily and the family accountant. My favorite scene: on Mother's Day, Archie gives his mom two kittens named Inky and Stinky.

These kids are so well conceived and each has his or her own likable personality and what's more, despite their chicanery, they're good kids, fun to hang out with. They even, on occasion, use their own invented language (kind of like pig Latin) called King Tut's English and the author has a King Tut Alphabet chart conveniently placed at the front of the book.

A fun book. A good mystery. Terrific characters. What more could you want?

It's Friday once again and Todd Mason is doing hosting duties for author Patricia Abbott at his blog, Sweet Freedom. So don't forget to check in to see what other forgotten or overlooked books other bloggers are talking about today. 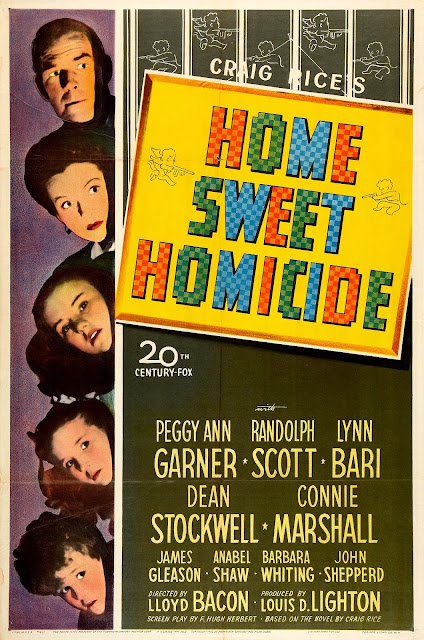 The poster from the film (based on the book) which I've never seen but I want to.