Friday Forgotten (or Overlooked) Book: THE NOOSE (1930) by Philip MacDonald 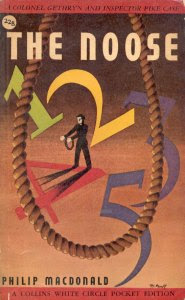 "...In the taxi which bore him from Victoria to his house in Knightsbridge, Anthony Ruthven Gethryn shivered. There is no contrast more unpleasant than the suns of Southern Spain and a damp, bleak, fog-ridden London at a November tea-time."

Another Philip MacDonald book I enjoyed immensely but then I'm predisposed to like his stuff. THE NOOSE has the kind of plot that works for me and the characters in that plot are intriguing though not as deeply involving as in other MacDonald books such as THE LIST OF ADRIAN MESSENGER and WARRANT FOR X. But then, those are MacDonald masterpieces so maybe that's expecting too much.

Gentleman super sleuth Anthony Gethryn is an acquired taste, let's be fair, he is a man of his time and place and can be, on occasion, a bit supercilious. He is cannily aware of his brilliance not unlike Sherlock Holmes and Poirot and other super sleuths of the era, but he is also aware of the peculiarity of his position. The trust and faith placed in him by his acquaintances does him honor and he knows it. And unlike Holmes (in the original canon) and Poirot who are lifetime bachelors, Gethryn has the hots for his wife, a devotion which foments just beneath the surface in a rather attractive way.

Gethryn's pet theory is that the police's actual job should be to prevent crime rather than rushing to lock the barn door after the horse has bolted. The police in their turn, indulge him his idiosyncrasy.

The truth is these tales have little to do with how real police work since those at Scotland Yard who know him are in thrall to this upper class gentleman whose brains and cunning are admired to the point of hero worship. But once you accept Gethryn's exalted position in these stories everything falls into place.

In THE NOOSE, Anthony Gethryn receives a telegram from his wife Lucia which beckons him back to England in a hurry to thwart an apparent miscarriage of justice. She has come to believe that a man named David Bronson will hang in five days time for a crime he didn't commit. Selma Bronson, an imposing and curiously affecting woman devoted to her husband, has applied to Lucia for help in convincing Anthony to take a hand in this last ditch effort to save her own husband's life. Lucia is convinced that once Anthony meets Selma, he'll want to help. There's just something about Selma Bronson's absolute belief in the innocence of her hubby which transcends logic.

Scotland Yard, on the other hand, is convinced on the evidence gathered, that Bronson is guilty and deserves his fate for the brutal murder of a man named Blackatter. The victim was someone whom Bronson disliked (in point of fact, he was disliked by many) and with whom (it was alleged) he was known to have arranged a meeting in the very spot where both men were found on the night in question: one unconscious with a gun nearby and one shot in the head dead.

However since its Gethryn nosing around the Yard does not actually forbid his inquires. In fact, unknown to his superiors, Chief Detective Inspector Pike will cut short his own holiday to join in this new investigation since wherever Anthony Gethryn goes, stuff happens and it's not outside the realm of possibility that he will turn up something. They are joined in their search for new clues by Mr. Flood and Mr. Dyson, two special reporters on the staff of The Owl, a publication partially owned by Gethryn - both of these men have their own quirky sleuthing specialties.

Gethryn's initial plan is to assume the innocence of David Bronson and thereby upset the real murderer's apple-cart by showing up and making no secret that he is looking for new information on Bronson's behalf.  So off to the country village of Farrow they go in Gethryn's brand new extra super-duper svelte black car which he drives full throttle never mind his wife snuggled up next to him covered in furs and his butler White, cowering in back.

"The big car devoured the almost empty London streets; tossed them throbbingly, contemptuously behind it. London began to fade; streets straggled; ceased, began again patchily; tailed off into fields. They tore up over Fordley Commons, swung right by the new bridge over the Bale and came out on to the smooth dun-grey riband of the arterial road."  I love this sort of thing: fast, furious, vivid.

Since Gethryn makes no secret that he believes in Bronson's innocence and is looking for cracks in the original case, it's no time before things begin to happen including a second murder. There's always a weak link in any case and Gethryn and his fellow sleuth's expertise is finding that link and exploiting it. This they do quite rapidly. But still, where is the evidence? Stirring up trouble is one thing even if that trouble gets some results, but hard evidence is what's needed to free David Bronson from his date with the gallows.

The final denouement, when it comes, reaching out of the past in a fight to the death, is a shocker.

Not the greatest plot in the world but it works well because these time is of the essence things usually do AND because MacDonald has a deft hand with setting, mood and keeping us in the dark. And also because in this ancient text from between the wars, there are three incredibly single-minded women written (for their time) quite well.

Since it's Friday once again, don't forget to check in at author Patricia Abbott's blog, Pattinase, to see what other forgotten or overlooked books other bloggers are talking about today.
Posted by Yvette at 12:30 AM