Friday Forgotten (or Overlooked) Book: IT WALKS BY NIGHT (1930) by John Dickson Carr 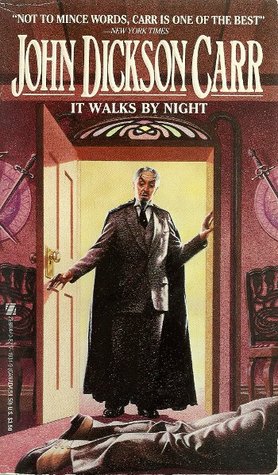 Just so you know, Henri Bencolin is my favorite John Dickson Carr sleuth. However this particular book is one I've never read before AND it is the first in the Bencolin series. How did I miss it? Maybe I didn't - you know how old lady memory goes. All I can say is that it came as a nice surprise to me since I hadn't remembered anything at all about it. So there is something to be said for old age and scattered wits.

Bencolin is always a treat because he is so vividly visualized by Carr. If a character is hardly more than a 'presence' when it comes to any actual resemblance to human kind, it's always a good idea to allow an eloquent visualization to carry the day. Carr's colorful description of a guy who fashions his hair - parted in the middle - with little wing tips which resemble small horns AND struts around wearing a long black cape is so over the top that it becomes in some weird way, enticing and self-energizing.

"In his hands a thousand facets came glittering out of the revolving jewel of Paris - lights and shadows, perfume and danger - the salon, the greenroom, the pits - abbey, brothel, and guillotine, a Babylonian carnival through which he walked in the name of the prefecture. The twirled hair, the pointed beard, the wrinkled eyes, and the inscrutable smile were known wherever he chose to go; whatever happened, his expression was always that of one meditating over a glass of wine. He sat alone in his office, with his fingers on all Paris as on a map. A finger moved across lights and grey squares, up streets, and paused at a house; he said a few words into the telephone at his elbow, and on the instant the police trap snapped like a deadfall. Even so, I had never accompanied him on an investigation until this night of April 23, 1927, when we were united in pursuit of the murderer Laurent."

Bencolin is a man so sure of himself and his powers that he claims rarely to have had to take more than 24 hours to solve a crime - even one as brutal and convoluted as the current incidence of mutilated bodies.

Not that this is a locked room murder of the normal sort contrived by Carr - well, yes, the murder occurs in a card room where no one was seen entering except the victim, all doors were watched, etc, etc, BUT the eventual denouement isn't - far as I'm concerned - the sort of standard locked room theatrics we're used to. (Please feel free to tell me if I'm wrong.) I can say no more without giving too much away.

Events take place in and around Paris where Bencolin is currently Prefect of Police. He is on the case because a famed sportsman and member of the aristocracy (or what's left of it), the Duc de Saligny, has sought police protection from a madman who has threatened his life. Uh-oh.

John Dickson Carr had a well-honed proclivity for dark doings and things that go bump in the night, most of his books reek of this - in a good way. Shadows lurk around every corner and creepy stuff happens regularly to his characters who, on the whole, are not a very likable bunch mostly because Carr simply isn't that concerned with them as much as he is concerned with plotting 'impossible' feats of bewilderment. The title of the book, IT WALKS BY NIGHT, is part and parcel of the whole effect - it's all atmospherics. Carr is keen on atmospherics. In this particular book macabre hints of Jacobean overkill lurk in almost every scene. Without that I suppose we'd get to the bottom of the thing that much sooner. But Carr is so skilled at all this grotesque nicety that it would be a shame not to indulge him.

The lunatic Laurent is the madman in question according to threatening letters received by the aforementioned Duc de  Saligny. Admittedly mad and recently escaped from a lunatic asylum, Laurent is currently in Paris but not before having had his face altered by plastic surgery. So, according to Bencolin, this madman could be anyone. The unsettling eeriness of that is part of the reason why I so enjoy Carr.

All this is revealed in conversation between the Prefect of Police and others, including a young American lawyer named Jeff Marle whom Bencolin has known since  Marle was a boy. The narrative is in the hands of this side-kick up from Nice at Bencolin's invitation since what is a mystery without an apprentice to amaze. I can't recall if this is the same chap who shows up in the next few books but I do remember that at one point he is on the verge of a duel with one of the suspects. But I'm getting ahead of myself as usual.

Oddly enough, a psychiatrist has also been invited along to observe the doings on the evening in question. His initial bewilderment and later his surmises add to the mix of confusion. The action takes place at a casino where the Duc and his new bride are spending the evening (strange honeymoon doings I'd have said) and where the police have set up a watchful presence.

Turns out that that very day, said Duc has married madman Laurent's beautiful ex-wife whom he [Laurent] had attempted to kill in an especially blood thirsty way. Needless to say, the young woman has spent many years getting over the attack and not bothering with male companionship until the Duc swept her away. Unfortunately it's going to be a very short marriage as, across a crowded room, Monsieur le Duc is seen stepping into the club's well guarded card room (known to be empty) and before anyone realizes anything is wrong, he is kaput. The crash of a steward's tray as he enters the room a few minutes later alerts Bencolin and his men to the horror that awaits within.

There in the otherwise empty room sits a ghastly sight: the body of Monsieur le Duc slumped on a divan. He is dead as a door-nail and minus his head. That head is propped up on the floor by the stump of its neck confronting any who enter the room. I told you Carr has a liking for the macabre. (At one point, the psychiatrist who should have really known better even in 1927, picks up the head by the hair and holds it up for inspection.)

Well, there's not much that can top this sort of ghoulish bloodletting. It is immediately deduced that no one had entered or left the card room (except for the victim) and that the doors were in full view of keen-eyed policemen at all times AND the window in the room had a forty foot drop and a layer of undisturbed dust.

It is up to Madame Saligny's long time friend Edouard Vautrille, a tall self-important man who smells vaguely of lilac-water, wears a monocle and clicks his heels together when he leaves the room, to step in and take charge of the distraught widow.

In the meantime, developments.

Bencolin's lawyer friend, snooping around, discovers the Duke's mistress - yes, even on his wedding day, he'd arranged a tryst (he's French) - reclining in a darkened room upstairs in the casino. He is taken aback but intrigued and helps her beat a hasty retreat. Later upon visiting her home at her invitation and with Bencolin's approval, another suitor shows up. It is Vautrille, the widow's friend with the clicking heels who drops by to be humiliated. Just a bit later, a second dead body is discovered slashed and stabbed.

This is actually a pretty straightforward story, but what with all the lurid atmospherics and Bencolin's enigmatic hints and asides, there's lots to weave through before a thoroughly satisfactory denouement is achieved.

Okay so this might not be everyone's cup of tea since histrionics are involved and you know how some people are about such things - but still, a very luxurious and murderous tale written by an expert. And the ending will, I guarantee, come as a surprise.