Friday Forgotten (or Overlooked) Book: THE HAND IN THE GLOVE (1937) by Rex Stout 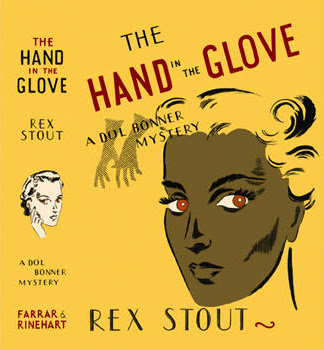 First things first: THIS IS NOT A NERO WOLFE BOOK. So don't be misled into thinking it is one you might have overlooked.

This is Stout's first Theodolinda 'Doll' Bonner book, a stand-alone - presumably at one time meant as a possible first in a series. The character does go on to appear (peripherally) in a couple of Nero Wolfe short stories in later years but (evidenced by this first book) she just wasn't strong enough (or interesting enough) to 'carry' a series and thank goodness, I suppose, that Rex Stout realized it before possibly pushing forward with more books.

So in a way, this review is more of a rant than anything else. Possibly because I'm in a ranting mood.

Going in I'll say that despite a few lukewarm reviews here and there online, I began the book expecting to be entertained. I'm just too big a fan of Rex Stout (and admirer of his genius) to expect otherwise. Sad to say, THE HAND IN THE GLOVE is not as entertaining as might have been expected. Good writing is a given when it comes to Stout and there is some of that here, just not enough to save this failed attempt by a man to write from a woman's point of view. Stout, unfortunately, is unable to capture even a smidgen of what it means to be female. His characters are merely that - characters in a story - never once do they come alive. Hard to believe, I know.

Especially when you consider how wonderfully alive Nero Wolfe and Archie Goodwin are in their books. It really is hard to reconcile THE HAND IN THE GLOVE as anything but a very minor Rex Stout attempt at something different. B for effort.

So why am I even bothering to talk about it? Well, I am a huge fan of the Nero Wolfe books and an admirer of some of Stout's other non-Wolfe books such as ALPHABET HICKS (now here's a series he might have done well with had he pursued it), not to mention the very enjoyable Tecumseh Fox mysteries which I found over at the Kindle store (since hard copies are notoriously difficult to locate). I definitely recommend the 'Fox' and 'Hicks' books however you can find them.

In a contrary sort of way, it is my enthusiasm and love for Rex Stout's books that makes an anomaly such as THE HAND IN THE GLOVE, kind of fun to talk about. At least it's interesting to me to try and analyze where an author might have gone wrong.

I'll begin with the main character: Theodolinda 'Dol' Bonner. She is a typically spirited young woman, pragmatic and keen-eyed, a budding detective eager to make her way in the world. She was once jilted at the altar and that has soured her on men. We take her and her cynicism at face value though at first glance it does seem a bit over the top considering that many women have been jilted and not had it twist their perceptions with such depth and rancor. It would have helped had we known a few of the details, but none are forthcoming. Just that she was jilted and ipso-facto, she has sworn off men forever.

At any rate, Dol and her heiress friend Sylvia Raffray are on the verge of going into business together. It's all just about a done deal. When, lo and behold, Sylvia pulls out at the very last minute because her guardian, P.J. Storrs has had a hissy fit over the whole idea. He is dead set against Sylvia being associated with 'business' and worse, ' a private detecting business'. People of her sort don't do this kind of thing. And because Sylvia is easily manipulated she goes along with her guardian's demand that she sever her ties with Dol's enterprise though it means that Dol will have to immediately close up shop, fire the receptionist and scramble to get her fledgling business up and running once again. Well, I suppose, friendship only goes so far.

Not that Sylvia doesn't feel guilty, there's plenty of hand-wringing and even a few tears and 'oh will you forgive me' going on. Whereas Dol, reacts rather benevolently and says she understands and not to worry, all will be well. We're still friends even though I have to shut down the office before we even get going. No harm done. Except that as a reader, I immediately disliked Sylvia and began right then to have my doubts about Dol.

This is where the whole story starts to fall apart even before it begins - at least for me.

Now, I don't know about you, but one would expect Dol to harbor at the very least some understandable resentment towards the wishy-washy Sylvia even if they have been friends for years and years and even if she, Dol, admires Sylvia's youth and attractiveness and sweetness of temperament, or variations thereof.

That's just when I began to think that perhaps Dol's deep fondness for Sylvia had more going on with it than just friendship. It would explain all the rationalization and looking the other way when anyone else would have been forgiven for losing their temper and stomping about a bit.

And in fact, for the rest of the book, I felt the same thing. Dol does seem inordinately fond of her friend. (And I do realize that friendship came with different vocabulary back then.) HOWEVER, no one in the book thinks anything of the closeness and Rex Stout gives no hint that the friendship had any unusual aspects. But honestly, it's hard to read this from a modern day vantage point and not see which way the wind was blowing, at least as far as Dol Bonner was concerned. In fact, had Dol's crush on Sylvia (I can't explain it any other way) been allowed to flourish a bit, it might have made Dol a more interesting and certainly a more sympathetic character.

As for Sylvia, well she is the sort of helpless young woman that men of that era danced devoted attendance on. If you've seen movies from the thirties and forties, read a few books, you know the type I mean. Exceedingly tedious today, but back then, seen as delightfully fragile and needing of help, guidance and strong shoulders to lean on.

Dol, in contrast, is the self-sufficient slightly older friend who can be counted on in times of stress. In most books and movies from that era, these women were usually the ones who chose careers and watched bemused as their friends upped and married and lived happily ever after. (Though Dol does go on to fashion and maintain a reputable private detection business in NYC - not such an easy thing to do. And earn the respect of Nero Wolfe - even harder to do.)

Now we come to the second untenable event in the book which threw me for a loop: Sylvia's guardian, though he is unwilling to allow his ward to go into business with Dol turns right around and hires Dol to investigate some suspected finagling going on in his family. My first thought: huh?

It seems that Storrs' nitwit of a wife is under the influence of a charlatan soothsayer (apparently back then this was a big 'thing' with the moneyed class - sooth-saying and so forth) and worse, has been giving said soothsayer chunks of cold hard cash. In the movie this guy would have been played by Cesar Romero.

Well, anyway, Dol isn't in a position to turn down a fee no matter where it comes from and so up she goes to Storrs' country estate just in time to find her client murdered and the house full of suspects, including her friend Sylvia and Sylvia's callow swains (yes there are more than one).

In these types of stories it is really is very helpful if you like the main protagonist especially when she or he will be surrounded by a bunch of not-so-very-likable suspects any one of whom might be a clever murderer. There is a knack to this sort of thing and admittedly, very few had it then or now (it is at the heart of any good country house mystery). Dol Bonner just isn't very likable primarily because she isn't an especially sympathetic character.

I suspect that Stout didn't have a clue about friendships between women and perhaps that's all that is at the bottom of the whole clumsy thing.

Anyway, there you have it. Rex Stout wasn't perfect, only nearly so. And aren't we lucky that he continued to write Nero Wolfe books until the end of his long life.