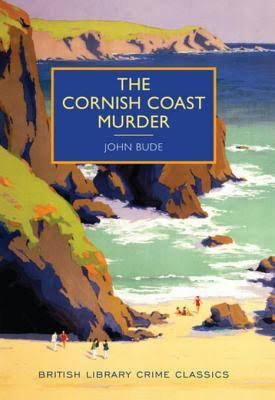 John Bude is the pseudonym of Ernest Carpenter Elmore (1901 - 1957), an English theater producer/director who wrote mysteries and fantasies which, unfortunately, many of us have never heard of. While not in the upper echelons of Christie and the other Golden Agers, John Bude was certainly deserving of a better literary fate than he received.

THE CORNISH COAST MURDER was Bude's mystery writing debut and a pretty good one. The book features an engaging crime-solving vicar and a befuddled local inspector of police working together to solve the murder of grumpy and unlovable Julius Tregarthan, an elderly magistrate found dead in his study with a bullet in his head. Just the sort of good stuff you go to cozies for. And certainly better written then most modern day attempts which are often nothing more than cartoons looped around some sort of eccentric hobby. In general, I'll take unheard of vintage cozy writers over their modern day brethren any day. In fact, I've given up on most modern-day cozy attempts. But as usual, I digress.

Also involved in THE CORNISH COAST MURDER are a couple of young lovers, one a shell-shocked WWI vet and the other the niece of the murdered man. There is even a sinister butler named Cowper. And a keen-eyed mid-wife named Mrs. Mullion, who happens along a dark lane on the night of the murder at an inappropriate moment.

Not that this is a perfect mystery, but it's not a bad way to wile away a few hours on and Autumn night or two. The book does go on a bit longer than it needs to and in the end, the killer is someone not mentioned except, perhaps, in passing, in the first half of the book. The denouement then is kind of brought in on a tangent, but it's not totally off the wall. You can see how the vicar arrived at his conclusion once two and two begin to make four in a roundabout kind of way. Though the actual 'how-to' of the murder seems a bit far-fetched. Still, it's only a quibble.

I also think the book might have been a bit sprightlier with a second murder thrown in, but maybe that's just personal taste. At any rate, despite that, the story moves along fairly rapidly with the rather small set of suspects being viewed and reviewed and nefarious plots surmised and dismissed by Inspector Bigswell who is on a time table rush to solve the case before the big honchos from Scotland Yard are called in.

I may sound lukewarm about THE CORNISH COAST MURDER, but I'm not. The three main reasons I enjoyed this book so much are:

1) The damp and windswept Cornish coast locale which is captured superbly by the author. Setting and the knack of describing it without seeming like a travelogue is so important in a mystery.

2) The wonderful fact that the murder investigation begins on a dark and stormy night.

3) The character of Reverend Dodd, the crime-solving vicar who enjoys his roaring fireplace, his food, reading murder mysteries and sharing them with his friend Doctor Pendrill who comes over once a week for the ritual sharing of six new mysteries by current (by 1935) writers:

"Let's see now - an Edgar Wallace - quite right, Pendrill. I hadn't read that one. What a memory, my dear chap! The new J.S. Fletcher. Excellent. A Farjeon, a Dorothy L. Sayers and a Freeman Wills-Croft. And my old friend, my very dear old friend, Mrs. Agatha Christie. New adventures of that inimitable chap Poirot, I hope. I must congratulate you, Pendrill. You've run the whole gamut of crime, mystery, thrills and detection in six volumes!"

The doctor coughed and puffed earnestly at his pipe."

Nicely done. Though the doctor never fully comes alive as a character, Dodd more than makes up for it with his admittedly fussy way of sorting through the clues and coming up with the murderer.

Another fine and unruffled mystery of the old school variety - don't miss it if this is to your taste.