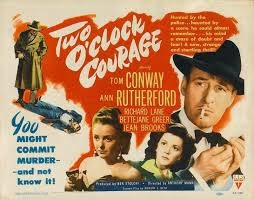 ...though the soon to be more famous Jane Greer (here listed as BetteJane Greer) is occasionally listed as co-star. But in her lesser role as a dissipated femme fatale, Greer is simply, laughably awful - cannot play drunk to save her life. At any rate, Ann Rutherford is the real co-star, she plays a spunky cab-driver who teams up with the hero, Tom Conway - an amnesiac with blood on his forehead - who, as things turn out, is wanted by the cops. No big surprise there since almost every amnesiac that ever stumbled around a dark street is always wanted by the cops in every movie anyone ever saw. What would be the point otherwise? 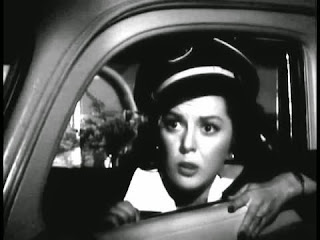 Ann Rutherford is the perky cabbie with gumption.

The surprise, I suppose, is that TWO O'CLOCK COURAGE is a fun way to spend 90 or so minutes on any afternoon or evening when you have nothing better to do. And to do it best, Elizabeth Foxwell over at The Bunburyist has the link to the full movie now running on youtube. That's how I linked up to watch a movie I thought I'd never heard of before - the initial attraction: Tom Conway. I am a big fan of Tom Conway, mostly as the Falcon, crime sleuth extraordinaire. I can remember many after-school afternoons and evenings spent watching the Falcon solving crimes and being suave or being suave and solving crimes, either/or - after taking the role over from his real-life, equally suave brother, George Sanders. And oh, by the way, who can forget Conway's oh-so-smarmy psychiatrist in CAT PEOPLE. I mean the guy set the 'science' of psychiatry back by at least a full century. 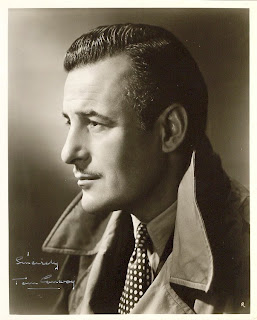 In TWO O'CLOCK COURAGE, our hero, Mr. X, is first seen stumbling along a dark and shadowy street with no idea who he is or where he is. Soon he is picked up by a cabbie, Anne Rutherford as Patty Mitchell, who at first assumes him to be drunk - she almost hits him with her cab. Until she notices the blood on his forehead and realizes he is hurt. So of course she then decides to tag along as her suave and handsome passenger tries to find out who he is and what he's done and oh by the way, who tagged him on the head. 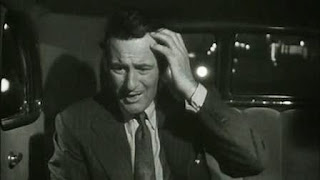 The movie seems to take place all in one evening and events move along at a snappy pace as our two intrepid sleuths jump from peril to peril into a case of murder involving a bunch of seamy theater people. Alongside bumbling cops and a loud-mouthed reporter reeling from clue to clue, it's not long before everyone is bunched together for the big denouement scene. In the forties, the cops were often seen as dopes and just to prove it, here, they allow a reporter (!?) to tag along on the case, ostensibly to help solve it. Yes, really.

Not much money went into this production as is soon evident in the night club set and in the apartment of a supposedly well-off playwright who in a scene wears one of those at home smoking jackets that men used to wear in the movies once upon a time. It's a hoot. Right away he comes under suspicion, I mean, THAT robe, that sneer, that pencil-thin mustache. Oh wait, Tom Conway has one too. But on him, it works. 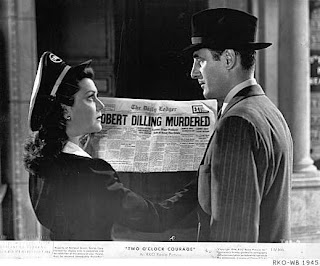 TWO O'CLOCK COURAGE is a not-too-taxing tale of plagiarism, jealousy and murder with a nicely hokey happily ever after in the end for our detecting duo. Ann Rutherford is a delight and Tom Conway doesn't deserve her. Hopefully, he'll find a way to live up to her devotion and general spunkiness. Love at first sight here, ladies and gents.

I've just realized (or maybe I already knew it and just forgot) that Dorian over at her blog, TALES OF THE EASILY DISTRACTED also reviewed this film (in 2014) in her own inimitable way. And lo and behold, Sergio over at TIPPING MY FEDORA also reviewed it way back when in 2012. So this is turning out to be the most reviewed B-movie in the history of movies. What can I say, great minds and all that.

Todd Mason's blog Sweet Freedom is the usual weekly home for Forgotten and Overlooked Films and other Audio/Visual whatnot. Check out the link.
Posted by Yvette at 12:30 AM